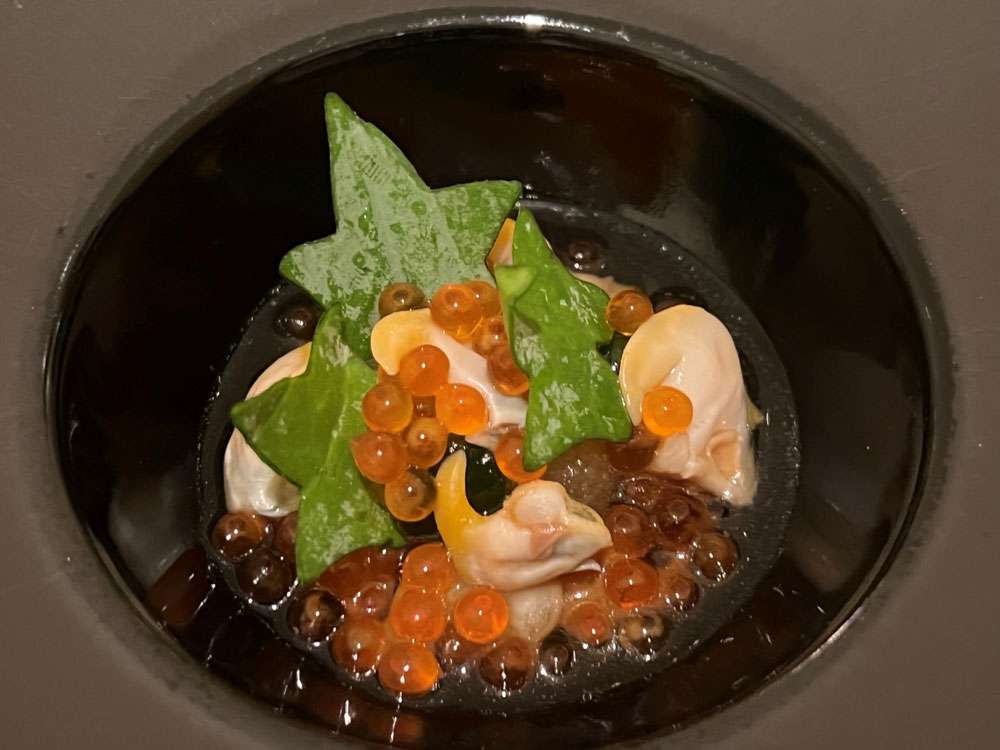 Whatley Manor is a 19th century Cotswolds manor house with 23 rooms, two restaurants, 12 acres of gardens and a spa. Originally a private estate and hunting lodge, it first became a hotel in 1987, but had a full restoration and relaunch in 2003 by its current owners, Alix and Christian Landolt.

We booked one night stay and dinner in The Dining Room restaurant.  Whatley Manor is a magnificent country house hotel with a spa and fabulous gardens.  The lounge and bar areas are spacious and well maintained.  Our bedroom was roomy with a separate bath and walk-in shower.  Breakfast was served in the Grey’s Brasserie restaurant, and was as good as I had hoped for.  Service throughout our stay was excellent.

Our meal in The Dining Room Restaurant was very good.  The Dining Room had just been demoted from two to one Michelin stars in the Michelin Guide Great Britain and Ireland 2022 following Niall Keating leaving in December 2021, and handing over to Ricki Weston.  Niall had joined Whatley in 2016, winning one star in 2018 and a second in the 2020 guide.  Impressively, Ricki has won his star for his new menu after being open for only a few weeks.

We arrived at the appointed hour in the lounge for a glass of champagne before our meal.  There were a variety of champagnes available on the trolley.

Then we were escorted into the kitchen so we could enjoy our amuse bouche while watching the chefs in action.  Here, we were served two amuse bouche.  The first was a very unusual fermented beetroot suet pastry pudding, with beetroot ketchup, rosemary, pine, thyme, and tossed in an aromatic pine sugar.  The second was N25 Schrenkii caviar, served on a chicken custard on a layer of parsnip.  Both were very good, and this was a great introduction to the dinner to come.

After we were escorted to our table in the dining room, we were served three more amuse bouche.  These were a potato ravioli filled with halibut skirt mousse and lemon, a lamb tartare, with caviar served on a sourdough cracker, and a brik tartlet with mushroom and shaved truffle, with a bavarois of aged balsamic and mushroom.  These were all unusual, well made and very tasty.

Next, we were served poached cockles, that had been removed from their shells and marinated in a pear and cucumber marinade, served with trout roe and oyster leaf.  This was accompanied by a very good sourdough, and a butter that had been whipped with crème fraiche, malt extract and yeast flakes.  The cockles were perfectly cooked.  Again, this was an unusual course that we very much enjoyed.

A Jacob’s ladder was served next.  This braised short rib had been brined in pineapple, brown sugar and cinnamon to tenderize and add flavour.  It was served with a burnt leek puree, an excellent ginger and beef consommé, and with parmesan, chives and truffle on top.  Another very good dish.

This was followed by a palate cleanser of beef tea consommé, made with the remaining beef and bones, with ginger and daikon (a radish).  The tea was exceptionally good, with a background warmth from the ginger and daikon.  This is a great way to use all the beef and waste nothing.

The fish course was a perfectly cooked poached Scottish halibut, wrapped in truffle and button mushrooms, served on top of salt-baked celeriac, with a celeriac puree, an egg custard pickle on top of the celeriac, and a mushroom XO hollandaise sauce.  This was beautifully rich and one of my favourite dishes of the meal.

A cheese course was served in a bowl.  A base of melted Caerphilly cheese was topped with Wiltshire truffle, and this was topped with a soda brik pastry tuille, with chicory, celery and a pickled walnut ketchup.  This was very rich and a great way to finish the savoury courses.

The Dining Room is open Thursday to Sunday evenings from 6pm, and the last sitting in the restaurant is at 9pm.

The Dining Room menu is priced at £175pp including canapés.  Although this might sound expensive, I think the quality of the food and cooking, as well as the top drawer service, justify the price point.

There are three optional wine flights: Journey Wine Pairing (£95pp), Signature Wine Pairing (£175pp), and the Prestige Wine Pairing (£245pp).  We chose the Journey wine pairing, which was very adventurous, but with some great choices that matched the food very well.  There is a wide choice of wines by the bottle and glass if you don’t want the pairing option.

This was a very good dinner, with exceptional service.  The quality of the food and the cooking were very high.  The dishes served on the taster menu were unusual (you don’t see cockles on many fine dining menus!), but very enjoyable.  This was a great experience, and we look forward to our return. Head chef Ricki Weston was promoted to the role of executive chef at Whatley Manor, following the departure of Niall Keating at the end of December 2021.

In 2010, Ricki was commis chef at White’s Bar & Kitchen in Steyning where he progressed to demi chef de partie.  He then moved to Wabi, a contemporary Japanese restaurant in Horsham, as chef de partie between 2011-12.

From 2012 to 2014, Ricki worked at South Lodge Hotel’s Camellia restaurant in Horsham as chef de partie, before moving to the hotel’s Michelin-starred restaurant Matt Gillan at the Pass.

In 2015, he was appointed chef de partie, then junior sous chef, at two-starred Restaurant Sat Bains in Nottingham, where he spent three years, before joining Whatley Manor as sous chef in August 2018.  He was promoted to head chef in October 2020.

Entrance to the manor: Main entrance to the hotel: The kitchen where you enjoy your amuse bouche and see the chefs at work: