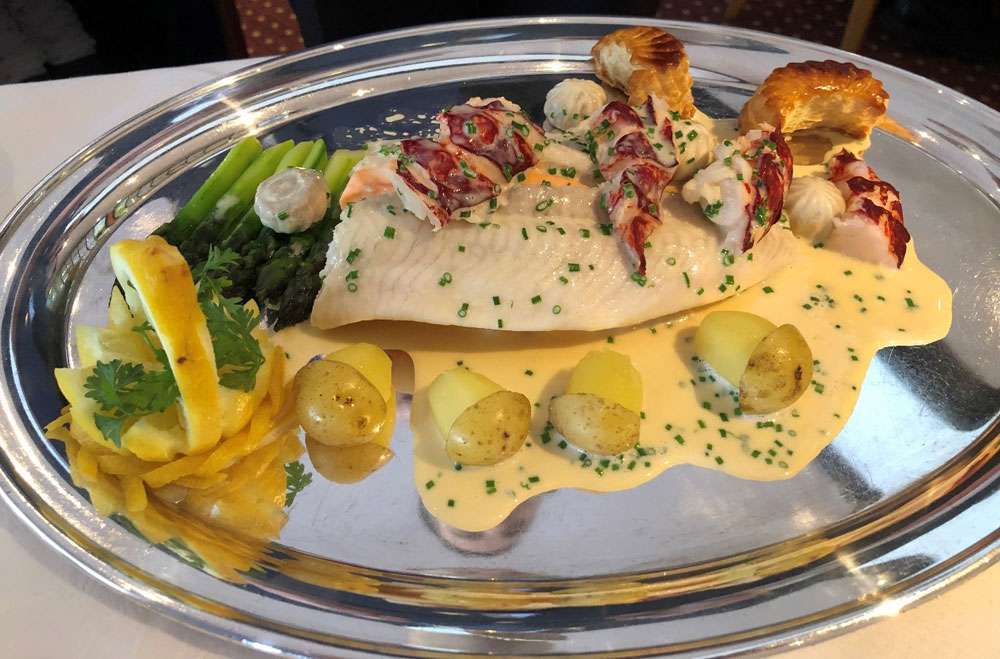 Chef-patron: Alain Roux – spent eight years gaining experience in France, training first as a pâtissier in Paris then spending his formative years working in one-, two- and three-Michelin-starred French restaurants, including Restaurant Pic in Valence and La Côte Saint-Jacques at Joigny. He returned to the Waterside kitchen at the age of 23 in 1992 where he became a demi-chef de partie.  In 1995, he became sous chef and he took over from his father Michel Roux as chef-patron of the Waterside in 2002.

In 2000 he was invited to become a Master Pâtissier in the International Association Relais Desserts.  In 2003 he became a member of the Royal Academy of Culinary Arts, the leading professional association in UK, and in 2008, he received an Honorary Fellowship of the Faculty of Professional Studies by Thames Valley University.  In 2011, he developed new menus for the Business Premier class onboard Eurostar trains.

Head chef: Fabrice Uhryn – first joined the Waterside Inn in 2001. Previously he had spent six years in one of the most prestigious catering schools in Belgium.  Following a further six years at the renowned Relais & Châteaux L’Hostellerie Lafarque, Fabrice returned to the Waterside in 2007 as sous chef and was appointed as head chef shortly after.

General Manager: Frederic Poulette – began his career at the age of 18, as a commis waiter at The Waterside Inn.  He continued to broaden his experience at hotels and restaurants in Europe, Asia and UK.  At the age of 28, he returned to The Waterside as Maître d’hotel and was been appointed General Manager in 2018.  He has been a key Roux team member for more than 20 years.

History: The restaurant has been serving inspirational French cuisine since 1972.  It is owned by the celebrated Roux père et fils, and is now run by Alain Roux.

Opened in September 1972 by Michel Roux, it gained a Michelin star when the guide originally came out in 1974, a second in 1977 and the ultimate third star in 1985.  Today, it remains the only establishment in the UK to have retained three stars for over 30 years.

When the Waterside opened in 1972, Pierre Koffmann was made the first head chef, having worked for Michel and Albert Roux at Le Gavroche.  Koffmann remained as head chef until 1977 when he left to open his own restaurant, La Tante Claire.  Michel Roux took over as head chef at the restaurant, slowly handing the reins over during the 2010s to his son and the current chef-patron, Alain Roux.  Alain has added his own menu items to the restaurant while keeping Roux family classics like soufflé suissesse and tronçonnette de homard.

In 2010, the Waterside Inn became the only restaurant outside France to retain three Michelin stars for 25 years.  To celebrate, a party was held and every Michelin starred chef in the UK was invited (116 chefs attended).

Review: The Waterside Inn provides a world-class culinary experience, set in an enchanting riverside setting with the most elegant surroundings.  The service is relaxed and effortless, yet impeccable.  The food is exquisite, as befits a three-star Michelin establishment.

We arrived at the restaurant slightly early, in eager anticipation, and you could feel the energy ramp-up as the staff prepared to provide the lunchtime service.  You knew you were visiting a temple of gastronomy, awaiting a very special dining experience.

The setting at the edge of the river in Bray is idyllic, with a weeping willow and a pier at which boats can tie up. The dining room looks out over the river and there is a little riverside gazebo for drinks.

The Waterside Inn’s menu changes four times each year with the seasons.  The menu is relatively extensive and is classically French.

We first visited about 20 years ago, and I remember we weren’t sure what to expect.  This was then our first 3-star experience, and we were slightly disappointed by the food and service.

Not now!!  This was by far the best meal I have had in the UK that I can remember – ever.  I am in awe.  The food seems simple – its meat and fish, not test tubes and dry ice.  But these dishes are complex and it takes a cook of the highest calibre to create them.

We chose from the a la carte menu.  The depth of flavour in the sauces was outstanding.  The whole Dover sole, filled with a lobster mousseline was a triumph.  The desserts, we had them all, were magnificent.  The service was perfectly precise, friendly and knowledgeable.  The staff had been trained properly and knew exactly what they were doing.  Fred, the General Manager, kindly gave us a tour of the kitchen where we had the pleasure of meeting and chatting to Alain Roux.

You need an Armagnac, or two, to face the bill at the end of the meal.  I don’t care.  I want to go back now!

We use cookies, just to track visits to our website and to give you the best experience on our website, we store no personal details. If you continue to use this site we will assume that you are happy with it. OkPrivacy policy