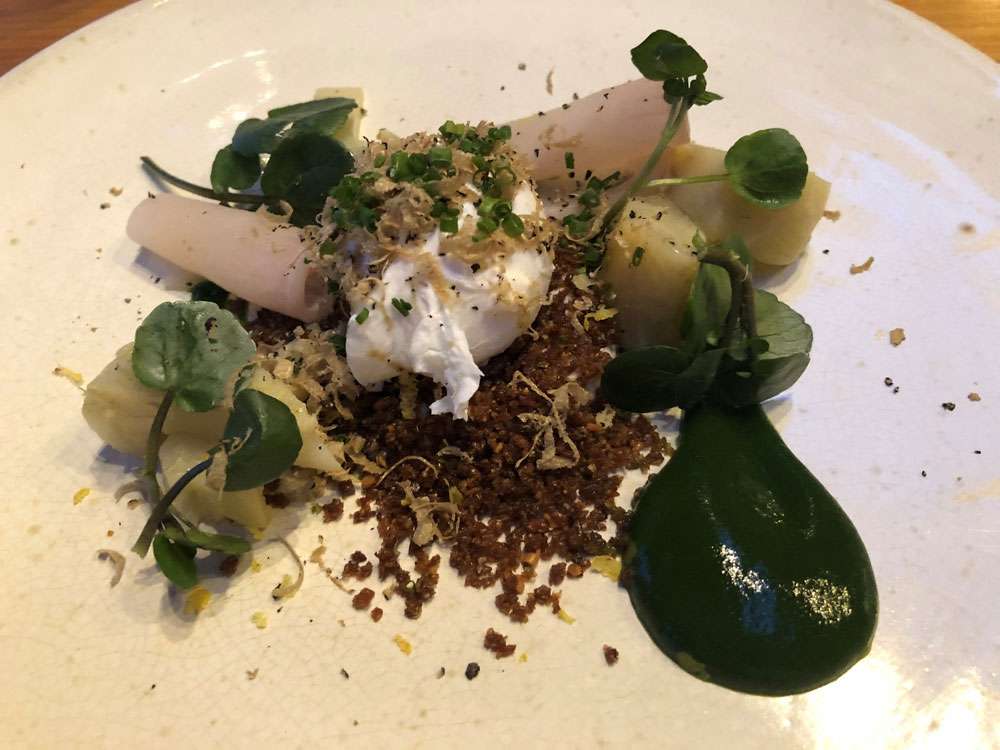 Ever since I experienced John Campbell’s food when he was the guest chef at The Vineyard, Stockcross last year (see my review), I have wanted to visit his 1 Michelin star restaurant which is a few miles down the road from The Vineyard.

We were warmly welcomed and enjoyed aperitifs in the bar.  The drinks were accompanied by some excellent homemade salt and vinegar crisps!  The restaurant has a Scandinavian feel, with a high roof, open plan and views into the kitchen.  The atmosphere is relaxed and the service polished.

The menu has a good variety of starters and main courses with some dishes you can share.  The wine selection is excellent.  Both the food menus and wine list are changed on a regular basis.

The service was impeccable, although a little rapid to begin with.  The team was friendly and the atmosphere relaxed.  The food was as excellent as we had expected.  There were great flavour combinations and a lot of creativity.  The main course cod was exceptional!

If you live in Newbury or are visiting, then this restaurant should definitely be on your list.

Chef Patron John Campbell achieved his first Michelin star in 1998, in his first year at Lords of the Manor Hotel and Restaurant in Gloucestershire.  In 2000 he launched his first cookery book Formulas for Flavour and quickly gained high acclaim from chefs and avid cooks nationally and internationally, winning the Andre Cointreau award for best recipe book.

After a very successful five-year term at the Lords of the Manor, in 2002 he moved to The Vineyard as Executive Chef.   During his eight and a half year tenure, he secured a global reputation for the restaurant’s outstanding cuisine.  John ran a successful Academy for young, enthusiastic chefs from all over the world and is dedicated to the training and development of young chefs.  In 2007 a second Michelin star was awarded.

In 2010, John opened Coworth Park with the Dorchester Collection as Director of Food and Beverage, earning the fine dining restaurant a Michelin star in the first year of trading.

John left the Dorchester group to create his own restaurant company.  After much searching for the right ‘spot’ for his new venture, in 2014 John found the perfect plot in Newbury where he could also add his much longed for cookery school.  The Michelin star was awarded in the 2016 results.

John is known as much for his training as for his culinary brilliance. He is the co-author of Practical Cookery and Advanced Practical Cookery (with Professor David Foskett and Victor Ceserani) as well as his own recipe book, Formulas for Flavours, and he also won the Education and Training Catey Award in the same year as the Chef Catey trophy, in 2008.

Head Chef Peter Eaton worked from demi chef de partie up to senior sous chef at 2 Michelin star Le Manoir aux Quat’Saisons, over a 5 year period starting in 2000.  Then he moved on as Head Chef at the Vineyard, Stockcross from 2005 for 4 years, when it had 2 Michelin stars.  He was Head Chef at Cowarth Park Hotel for 2 years.  He joined John Campbell in 2014 to set up the Woodspeen and has been Head Chef since.

At the Woodspeen, John has created a dining space with a Scandinavian feel, whilst keeping the character of the original pub and retaining a warm atmosphere.  He has also opened a cookery school, with an excellent vegetable garden, next door.

The cookery school is housed in a former farm building close to the restaurant. It opened two months after the restaurant and has 10 workstations, a demonstration area and a chef’s table for up to 12 guests.

Inside the restaurant there are approximately 70 covers:

View from the restaurant into the kitchen:

We chose a Hamilton Russell Vineyards Chardonnay 2017 from Hemel-en-Aarde Valley, South Africa.  This scores a 4.1 / 5 on Vivino and a 96 / 100 from Tim Atkin.  This is one of the top 25 South African Chardonnay wines in the UK now.  It has rich oak, butter and vanilla tastes, with some background citrus and pear.  There is a good balance between the fruit and oak.  It worked very well with all of the courses we chose, especially the cod and chicken main courses.

To accompany the chocolate dessert, we chose a Conte d’Attimis Maniago Tore delle Signore 2015 from Coli Orientali del Friuli, Italy.  This scores a 3.7 / 5 on Vivino.  It is made from the Verduzzo Friulano grape near the Italian and Slovenian border.  It is an unusual dessert wine that is not too sweet.  There is a balance between the sweet and tannic sensations.  It has a honey bouquet with undertones of candied fruit.

The fabulous Woodspeen Delamain, Pale and Dry, XO cognac accompanied the coffee.  This is a blend of old Grande Champagne cognacs, each of which is aged separately, and then the blend itself, made at the end of the ageing period, is aged for two years more in well-seasoned Limousin oak casks It is called “Pale” because it is much paler than other cognacs of comparable age due to the natural pale colour of the cognacs used in the blend which are all matured in old casks, and “Dry” because it has only its natural sweetness: