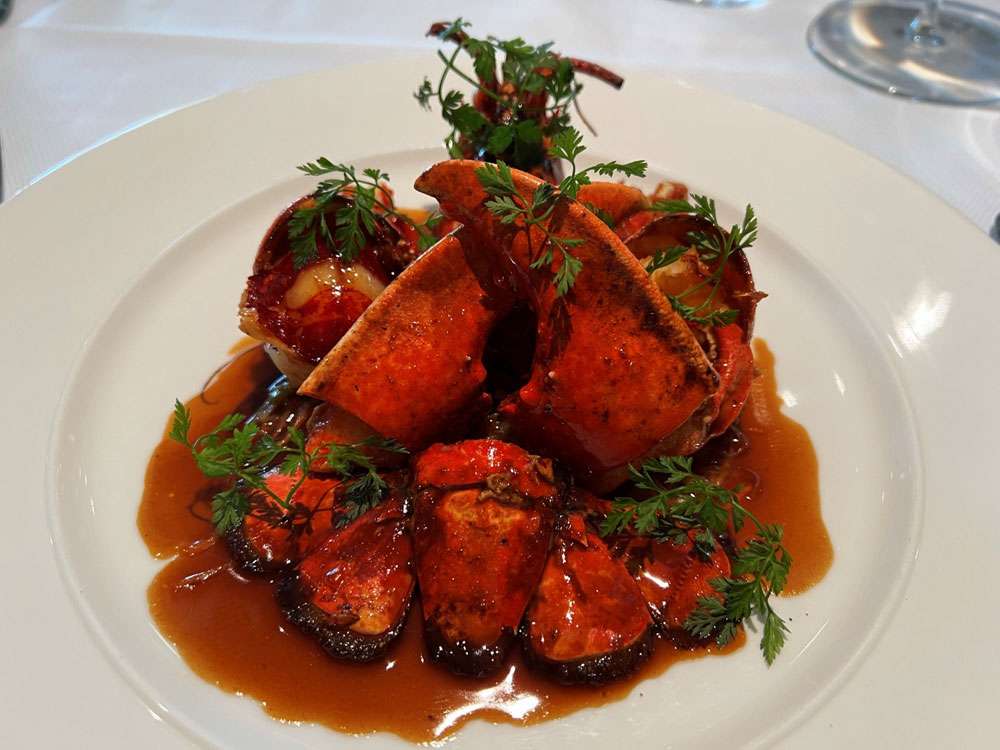 There are 136 restaurants in the World that can boast 3 Michelin Stars, and the UK has only 8 of them.  Two of these are situated in Bray, a small village near Maidenhead, in Berkshire, on the banks of the Thames.  These are The Fat Duck and the Waterside Inn.

Michel Roux opened The Waterside Inn in September 1972.  It gained a Michelin star when the guide originally came out in 1974, a second in 1977 and the ultimate third star in 1985.  Today, it remains the only establishment in the UK to have retained three stars for over 30 years.  Alain Roux took over from his father as chef-patron in 2002.

For more information about the history of the Waterside Inn, please see my previous review in May 2019.

This restaurant is renowned for providing a world-class culinary experience, set in an enchanting riverside setting with the most elegant surroundings.  The service is relaxed and effortless, yet impeccable.  The food is exquisite, as befits a three-star Michelin establishment.

We chose from the a la carte menu, and started our meal with three amuse bouche.  These were a mini Croque Monsieur and a very nice Barbajuan (which is a kind of fritter) stuffed with snail and parsley.  Another amuse bouche of potato espuma (a foam), with breadcrumbs and black seeds, was slightly disappointing for a restaurant at this level.

We ordered the Waterside Inn classic of pan-fried lobster medallions and ginger flavoured vegetable julienne with a white port sauce.  The lobster meat was extremely tender and replaced back into the shell for presentation.  The sauce had a spicy warmth from the ginger.  This was a superb course.

We also tried the langoustine souffle that is served with a cassolette of langoustines scented with truffles.  The langoustines were of very high quality and tasted very sweet.  This was another excellent dish.

For main, we ordered the Waterside Inn classic of grilled rabbit leg and loin fillets, served on a celeriac fondant, with an Armagnac sauce, sweet glazed chestnuts, a single ravioli (containing finely chopped leg, shoulder, and liver), and rabbit shaped fried bread held upright in a squirt of light mashed potato.  This has been on the menu at the restaurant since it opened and is outstanding.

We couldn’t manage the desserts but opted for the cheeses instead.  The trolley was full of superbly conditioned cheeses, with many of the French classics.

We enjoyed Armagnac with our coffees and petit fours in the lounge area.

The service was impressive throughout.  All the team were attentive and extremely knowledgeable.  Alain Roux visited each table in the restaurant for a quick chat and feedback from the customers.

When you visit the Waterside Inn your bill will vary substantially based on the menu and courses you choose, and the wine you select.  The cost for each course may seem substantial in comparison to other restaurants, but for me I think it is very good value given the quality of the ingredients and the high level of technical skills displayed in the kitchen. The Waterside Inn has an impressive collection of exquisite, rare Cognacs In the picture, on the left, Cognac Hardy Perfection LUMIERE was blended from pre-phylloxera cognac put aside by house founder Antoine Hardy in the 1870s.  “Lumiere” means “light”, and this is the fifth edition of the famous Perfection series (editions included WATER, FIRE, AIR, and EARTH).  It was distilled from 100% Colombard grapes, all from the area now known as Grande Champagne, and is an incredible, rare old cognac.  This is the world’s oldest known unblended Cognac.  It is presented in a beautiful Daum carafe.  This was a limited edition of 600 bottles and costs about £10,000 per bottle.

In collaboration with Maison Lalique, Hardy’s final creation in the Four Seasons collection was named L’Hiver, shown in the picture in the middle.  The carafe is topped with an ice blue crystal tiara adorned with dormant vines, and costs about £12,000 per bottle.  L’Hiver is a blend of six centenary-old eaux-de-vie selected by Armand Hardy, grandson of the founder of this famous Cognac House, between the two world wars.  The carafe is sculpted in Lalique crystal.  There was a limited edition of 400 bottles.

In the picture, on the right, is a Hardy Cognac Privilege, a Grande Champagne cognac that was produced before the First World War and bottled in 1983 by Jacques Hardy.  It is presented in a leather casket and a crystal carafe designed by Marie-Claude Lalique.  The bottle is signed off by Bénédicte Hardy to affirm its provenance and premium quality.  There were only 333 produced and each bottle costs approx. £10,000.

The silver duck press at the Waterside Inn is the twin of the one at Restaurant Andrew Fairlie at Gleneagles – they were purchased at the same time by Michel Roux: