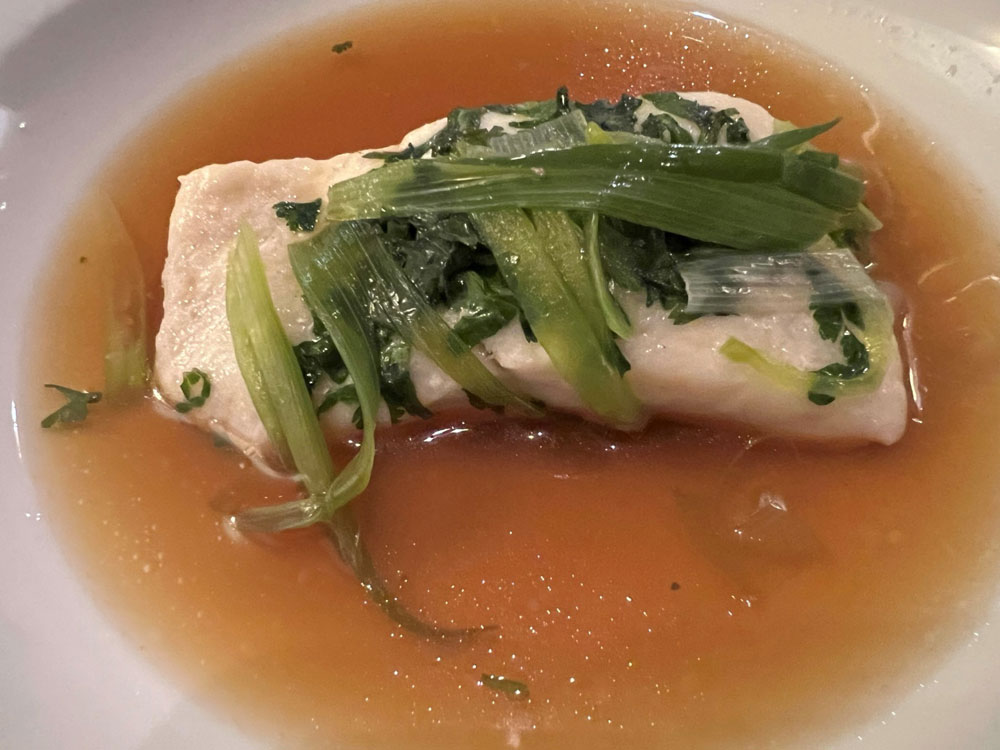 The Walnut Tree is situated a couple of miles east of Abergavenny on the B4521.  It was originally opened by Ann and Franco Taruschio OBE in 1963, serving dishes from the Marche region of Eastern Italy.  Franco is one of the first celebrity television chefs.  The Walnut Tree became the first Gastro Pub in the UK, with Ann and Franco at the helm for nearly 40 years.

The restaurant was purchased by Francesco and Enrica Mattioli in 2001, and under the management of head chef Stephen Terry, won a Michelin star in 2002.  The restaurant lost the star in 2004 after Stephen’s departure when he moved to open The Hardwick restaurant a few miles from The Walnut Tree.

The Walnut Tree began to have financial troubles.  The Mattiolis sought the guidance of Gordon Ramsay, appearing on his television series Ramsay’s Kitchen Nightmares in 2004.  Ramsay criticised the overpricing at the restaurant and helped them to hire a new head chef, Spencer Ralph.  After a second appearance on Kitchen Nightmares in 2005, Mattioli criticised the show as “fake”.  The restaurant was closed in 2007 after going into receivership and the Mattiolis blamed Ramsay’s show for making the restaurant appear too expensive.

The restaurant was reopened in early 2008 as a joint partnership between hotel-owner William Griffiths and chef Shaun Hill.  In 2008, it was named the BMW Square Meal Best UK Restaurant and the AA Restaurant of the Year for Wales.  A year later, The Walnut Tree was named the best restaurant in the UK by the Gourmet Britain food guide.  The restaurant regained its Michelin star in the 2010 guide, which it still holds today.

The restaurant offers an à la carte menu and an extensive wine list.  The menu changes every day, depending on the availability of the ingredients.  There is a bar with an open fire, and the restaurant has about 20 tables.  The atmosphere is relaxed and the restaurant informal.  There are rooms available if you want to stay overnight.

Our dinner started with a canape of a panzerotti, with a ricotta and spinach stuffing, and parmesan grated on top.  This was slightly underwhelming.

Much better was the turbot with dashi broth.  The turbot was carefully cooked, and the dashi had good flavour.  A second starter was lamb shoulder ragu with pappardelle and gremolata.  The ragu was very flavoursome and the gremolata (a green sauce made of chopped parsley, lemon zest, and garlic) was a nice addition.  We shared a third starter of three grilled langoustines with aioli.  The langoustines were excellent, perfectly cooked and very sweet.

The bread selection included a buttermilk white bread, and a brown bread with seeds and nuts.

The main course of roast woodcock was served with lentils and salsa verde.  Traditionally, when cooking woodcock, the bird is roasted whole, without removing the entrails (this is because the bird empties its bowels when taking off and the entrails are clean).  The trail is served on toast, and the skull is split and served so you can suck the brains out.  Here, the legs and breast were perfectly cooked, the trails were served like a pâté and were rich and gamey, and the brain was succulent and sweet.  It’s rare to find woodcock on a menu these days, and this bird was cooked perfectly.  A rare treat!

Our other main course was plaice with sorrel sauce and crab.  The plaice was precisely cooked and had great flavour.  The crab was carefully picked, adding sweetness, and the sorrel sauce added a fruity, tart like zing to the dish.  This was another excellent main course.

We also ordered side dishes of roasted beetroots with a walnut presto, and Cornish potatoes with sun dried tomato tapenade.

For dessert we ordered a passion fruit crème brûlée with Breton shortbread, and a very good apple and walnut tart served with quince ice cream.  Both desserts were excellent.

There was a selection of French cheeses available if you had the capacity. Sadly, we were too full at this stage.

The meal was completed with a mini Christmas mince pie and a dark chocolate with stem ginger.

The meal was very good, and the restaurant lived up to its “iconic” status.  I especially enjoyed the langoustine starter, and the amazing woodcock.  The excellent ingredients are clearly key to the cooking here, and there is a considerable amount of culinary expertise evident.  This was a very enjoyable evening, and I am looking forward to returning. Shaun Hill is one of Britain’s most successful chefs, having started his career working for Robert Carrier in 1966 at his famous restaurant Carrier’s, in Camden Passage, Islington.

Shaun moved onto The Gay Hussar, in Soho, and worked at some of London’s most prestigious restaurants, including The Capital Hotel in Knightsbridge (under Brian Turner) and Blakes in South Kensington.

In the 1980s, Shaun was head chef at Gidleigh Park, in Devon, for nine years, holding a Michelin star for much of that time.

After 10-years, The Merchant House, with Shaun as a one-man band in the kitchen, was closed in 2005, when Shaun and Anja wanted to retire from daily restaurant service.  Shaun become a restaurant consultant, advising The Glasshouse in Worcester, The Montagu Arms in Hampshire, and Fortnum & Mason when they refurbished the London food store’s five restaurants.

Then, in 2008, Shaun and William Griffiths, of sister establishment The Angel Hotel, decided to renovate and reopen The Walnut Tree in Abergavenny.  In 2010 they were awarded a Michelin star, turning around the restaurant’s fading fortunes alongside long-time head chef Roger Brook.  Roger left in 2017 to start his own guest house, and Shaun is still at the helm in the kitchen at the restaurant. The main entrance to the restaurant: