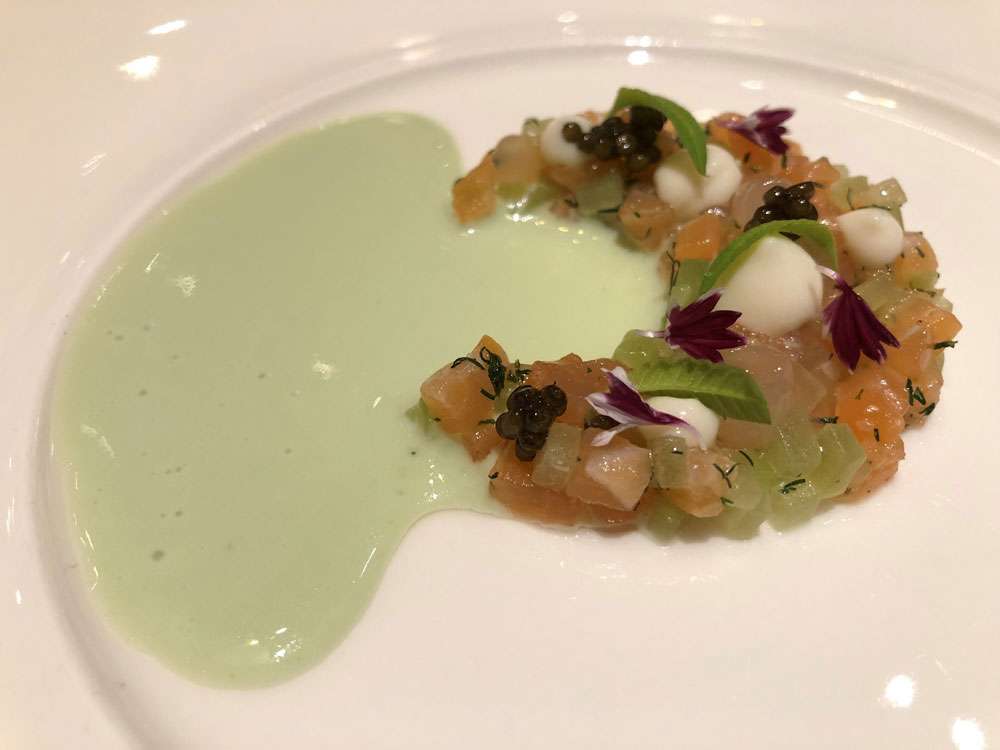 We visit the Vineyard on a regular basis, and always for New Year.  If you like superb wine and great food, then this is a destination that should be on your list.

We were sad to hear that Chef Robby Jenks and his partner, the excellent restaurant manager Rebecca Galland, were leaving the Vineyard to join the Samling in Windermere, Cumbria.

However, new Executive Chef Tom Scade joined the Vineyard from the Ritz hotel in London where he was sous chef to John Williams MBE, so we had high expectations and we weren’t disappointed.  Tom’s food is fabulous.  The menu has changed and there are a number of superb new dishes.

We also chose the Judgement of Paris wine pairing, which is a lot of fun as you compete to identify the country and region each wine was made in.  There are six French and six Californian wines, and some are served in black glasses that makes it even more difficult.

Once again, our visit to the Vineyard was a great success.  The food and wine are as exceptional as ever.  I highly recommend a visit!

We were sad to hear that Robby Jenks and his partner, restaurant manager Rebecca Galland, were leaving the Vineyard to join the Samling in Windermere, Cumbria.

Tom Scade has joined the Vineyard as Executive Chef in June 2019, from the Ritz hotel in London where he was sous chef to John Williams MBE.  Tom won the prestigious UK Final of the 52nd Le Taittinger Prix Culinaire International competition in September 2019 and went on to place third in the international competition.

Tom initially trained under John Williams for 3 years from 2005, progressing from Demi Chef de Partie up to Premier Chef de Partie.  In 2009 he joined the Mariners Rock in Cornwall as Head Chef and was later promoted to General Manager.

In 2014 he was appointed as Head Chef by Martin Blunos’ (former 2 Michelin starred chef) to open the new Fish Restaurant in Bath, and then opened the Crab and Boar in Chieveley as head chef in 2015.

Tom returned to the Ritz as sous chef in 2016, the year the hotel gained its first Michelin star.

The Vineyard’s motto is Eat. Sleep. And drink wine.  Privately owned by Sir Peter Michael and family, this is a 5 red star hotel and spa, renowned for impeccable service, their 3 AA Rosette restaurant and our award winning 30,000 bottle wine cellar.

Sir Peter was inspired by the famous Paris Wine Tasting of 1976 — known as the Judgment of Paris.  This was a wine competition organized in Paris on 24 May 1976 by Steven Spurrier, a British wine merchant, in which French judges carried out two blind tasting comparisons: one of top-quality Chardonnays and another of red wines (Bordeaux wines from France and Cabernet Sauvignon wines from California).

They are proud members of Relais & Châteaux since 2003 and Pride of Britain.

From the bar looking through into the restaurant:

The restaurant looking up to the top level:

The tasting wine were as follows:

The Isle of Wight tomato, goats curd, basil and olive starter was accompanied by a Chateau de Rouillac Pessac-Leognan, 2016 from France, vs Peter Michael Winery L’Apres Midi 2016 from California.

The Chalk stream trout, cucumber, caviar and horseradish was accompanied by a Talley Vineyard, Rincon California 2014, vs Chateaux Meursault, France, 2015.

The Berkshire pork trotter cake, with turnip and apricot was accompanied by an Alsace Gentil Hugel, France 2017 in a black glass.

The poached Conference pear and eucalyptus pre-dessert was accompanied by a Schramsberg Vineyards, Cremant, California 2014

The main dessert was a bitter chocolate Cremossa with fig olive oil was accompanied by an Andrew Quady, Elysium Black Muscat, California, 2016, vs Sauternes, Chateau Suduiraut, France, 2010 in black glasses.