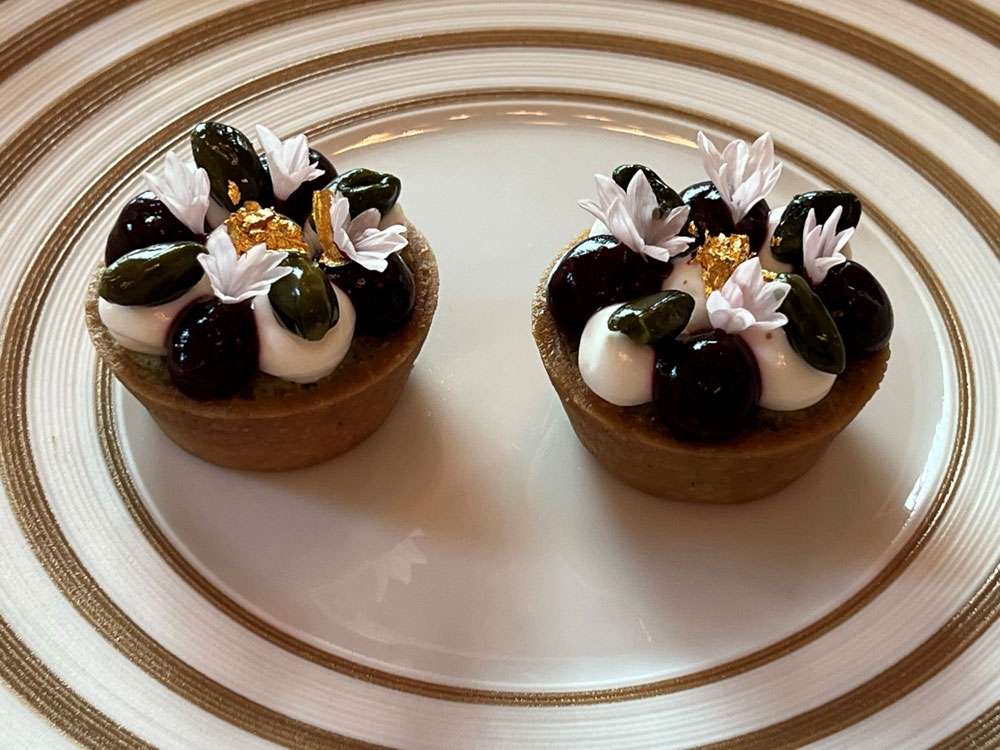 The Ritz Hotel was opened in 1906 by Swiss hotelier César Ritz after his venture with The Carlton Hotel on Pall Mall (which opened in 1898). The legendary Auguste Escoffier was the chef.

The dining room is at the back of the hotel as you enter through the glass doors.  You walk past the Rivoli Bar, and the afternoon tea guests to get to the restaurant, past one of the resident pianists.  This is a formal dining room that insists on a jacket and tie for men.

It is the grandest dining room in London, with high ceilings covered in gilt and murals, and floor to ceiling windows overlooking the restaurant balcony and the new alfresco Ritz Garden Bar and Restaurant, next to Green Park.  There is a second resident pianist for the dining room.

The kitchen brigade is headed by Executive Chef John Williams MBE and Head Chef Spencer Metzger.  The Ritz Restaurant was awarded a Michelin Star in the Michelin Guide Great Britain and Ireland 2017.  It’s quite surprising that this restaurant only has one star as the very high level of cooking is up there with other two- and three-star restaurants in London.

We chose the 7-course Epicurean journey, the “Surprise Menu”, with accompanying wines.  This menu must be ordered before 1.30pm at lunchtime, so I made sure we were there in good time.  The cost of the 7-course Epicurean menu is £170 per person, and the Classic Wine pairing is £110 per person.  There are other less costly menu alternatives, as well as more exclusive wine flights.  We were consulted on our preference for wines, so there is a lot of flexibility if you prefer different wine regions or types, and the pairing can be made to match your preferences.

We were served two canapes, a Ragstone goat cheese mousse with wood-roasted pepper, topped with micro basil, sitting on a short sable biscuit base, and a duck liver parfait with sour cherry and yoghurt.  Both canapes were very tasty and well balanced.

The first course was Norfolk crab with almond and grape.  This included a layer of cucumber poached in apple juice, roasted almonds, layers of white and brown crab meat mixed with chilli pepper, lemon zest and lemon juice, topped with an espuma and pimenton.  There was a lobster tuile on the side.  This was accompanied by a Nyetimber Blanc de Blancs Brut 2014 sparkling wine from Sussex, perfect with the crab.

Next was a ballotine of duck liver.  The foie gras was supplied by Philippe Andignac in Castelnau Chalosse in the southwest of France.  It had been marinated in port, Sauternes and Armagnac for 24 hours, rolled out with a port and spice reduction, and then wrapped in a spiced port jelly.  It was served with a preserved cherry gel, pistachio yoghurt and a micro salad.  This was accompanied by excellent toasted brioche as well as a pistachio Bakewell tartlet with pistachio frangipane, natural yoghurt, cherry gel, and candied pistachio nuts on top.  The combination of rich foie gras, with high quality cherry, pistachio and brioche was outstanding.  This dish was accompanied by a white wine, an Eroica Riesling, 2019, from Columbia Valley, USA, which had subtle mineral notes and medium acidity, well matched to the richness of the foie gras.

The fish course was Cornish turbot with courgette, broad beans, fennel and saffron.  The fish had been pan seared with a little curry salt, and was precisely cooked with a “mother of pearl” sheen.  The sauce was light and finished with an espelette pepper oil.  The fish was full of flavour.  This was another terrific dish.  It was accompanied by a Pieropan, La Rocca Soave Classico, 2020, from Veneto, Italy.  This fresh, medium gold colour white wine had aromas of peach and citrus, and matched the turbot very well.

Next, was a superb savoury egg custard (chawanmushi), with black Australian Winter truffle and Parmesan.  The egg custard was made with milk, cream, kombu and Parmesan, and whisked with aged Parmesan foam.  It was served on top of a truffle jelly, all topped with fine shavings of black truffle, and served with truffle sauce.  Gougeres, filled with Parmesan mousse and topped with black truffle, were served on the side.  This dish was accompanied by a Gonzalez-Byass, Vina AB Amontillado Fino sherry.  This was an unusual choice, but the sherry was not too dry, and it was a very good match to the custard, Parmesan and black truffle.

The main course was an Anjou pigeon “a la presse”.  This high-quality pigeon, from Anjou in the southeast of France, was served using the silver press in a similar way to the pressed duck dish at the famous 1 starred La Tour d’Argent restaurant, in the Quai de la Tournelle, Paris.  First, the pigeon breasts were roasted in the kitchen, and allowed to rest, then glazed in a reduced Madeira sauce.  The cooked pigeon was served at the table and carved in front of us.  Then, the juices of the carcass were extracted by squeezing it in the silver press, on a trolley at the side of our table, and port was added.  A sauce was made from a pigeon reduction, that had been prepared in the kitchen, the pressed juices, green peppercorns, foaming butter, and Cognac, and flambéed in a pan at our table.  On the side was a dish of crisp pommes souffle.  This was another very good dish, the pigeon was very tender, and the sauce rich but balanced by the vegetables.  This is the only restaurant I know of in the UK that is still using a press, even though many restaurants have them as ornaments.  It was marvellous theatre, with the whole restaurant watching the action, and the pigeon was fabulous.  It was accompanied by a Chateau La Fleur de Bouard, Lalande De Pomerol, 2014 from France.  This red wine from Bordeaux was a good entry level Pomerol, with lots of cassis and graphite notes that worked very well with the pigeon, peppercorns and cognac.  It was another excellent pairing.

A cheese course featured Tunworth cheese served on a wafer.  The cheese had been cut in half and filled with truffle.  This was accompanied by a pear puree, and the cheese was coated with honey from the Ritz beehives sited on top of the hotel.  It was covered by a honey tuille.

Next, was a pre-dessert of Kent strawberries with white chocolate Chantilly, and strawberry ice cream, covered by a honeycomb tuile.  The strawberry fruit was very refreshing.

The dessert was salted peanut with praline and milk ice cream.  On the bottom was a chocolate sable sitting on a small pool of salted caramel, with peanut mousse, caramelised peanuts, and gold leaf.  It was accompanied by a peanut praline, peanut mousse, and milk ice cream.  The matching wine was a Villa Mattielli, Ambra Recioto Di Soave, 2013 from Italy.  This white wine has a golden yellow colour, with floral and honey notes.  It was sweet but not too sweet, and had high acidity, cutting through the richness of the praline, ice cream, mousse, and caramel.

Coffee and a selection of very good petit fours were served outside on the terrace.

This was easily one of the best meals I can remember eating in London.  The quality of ingredients and the level of cooking on display were very high.  The service was top drawer.  The Ritz Restaurant is at the top of their game.

Inside the Ritz restaurant: John Williams, Executive Chef, was taught by his mother to cook, and continued with cookery classes at school.  His culinary career began in 1974 with his first position as a commis chef at the Percy Arms Hotel in Otterburn, Northumberland, at the age of 16, as he studied for his City and Guilds at South Shields College.

John qualified as a chef at Westminster College in London, while working at the Royal Garden Hotel, Kensington, and worked his way through the kitchen operation up to chef de cuisine in 1982.  In 1984, he accepted the position of director at the Restaurant Le Crocodile in Kensington.

John joined The Ritz as Executive Chef in 2004.

John was crowned the AA’s Chef of the Year in 2017, following in the footsteps of Michel Roux Jnr, Simon Rogan, Pierre Koffman, Heston Blumenthal and Rick Stein.

Spencer Metzger is Head Chef at the Ritz Hotel.  He is second in command of a brigade of more than 60 chefs at the hotel, working under Executive Chef John Williams across the Ritz restaurant, the Palm Court, the Rivoli bar, the Ritz Garden, room service and private dining rooms.

At the age of 15, he undertook a work experience placement at the Ritz.  John Williams helped Metzger to enrol at Bournemouth and Poole College, where he completed the chef scholarship.  When he graduated, he worked in the Ritz’s kitchen in 2010, working his way up the ranks and gaining experience in all the sections.

In 2015, Spencer left the Ritz for a position as chef de partie at Simon Rogan’s two-Michelin-starred L’Enclume in Cartmel, Cumbria.

He won the 2019 Roux Scholarship and completed a three-month internship at the three-Michelin-starred Frantzen restaurant in Stockholm at the start of 2020.

In 2019, he was also awarded The Caterer’s Acorn Award, recognising 30 of hospitality’s rising stars under the age of 30.

Spencer was crowned the GBM 2022 Champion of Champions.  He won the fish and main courses.  The fish course entitled Be Careful What You Fish For, drawing inspiration from the TV series Sherlock Holmes.  It was a dish of brill, served with a smoked beurre blanc sauce, dulse, finger lime, chives, marinated grapes and sea vegetables.  Judge Tom Kerridge said that “this is one of the best dishes I have eaten, anywhere in the World.  It is outstanding”.