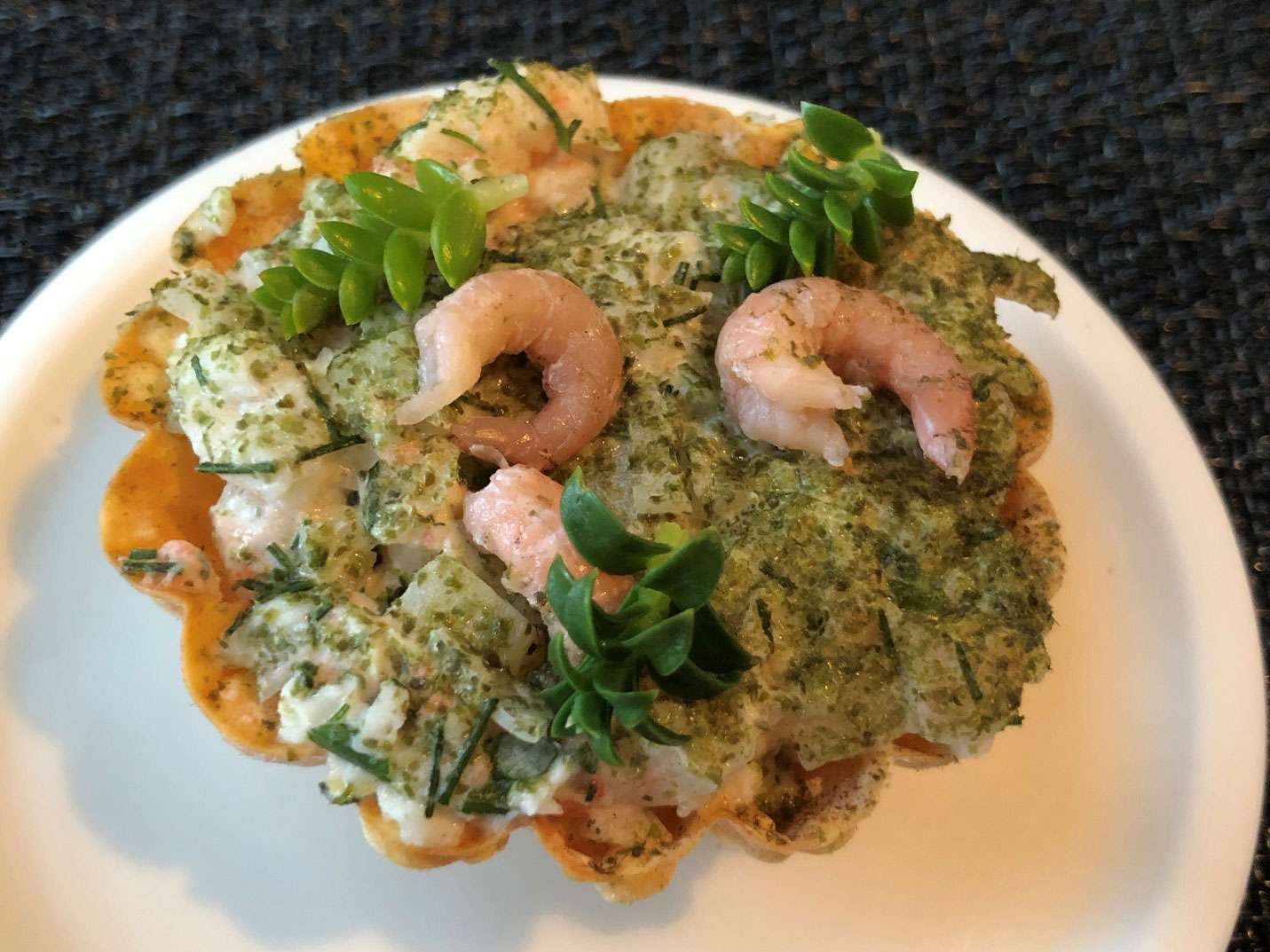 Tom and Michaela Kitchin opened their restaurant, The Kitchin on Edinburgh’s Leith waterfront in 2006, located in a converted whisky bonded warehouse.  The restaurant was awarded a Michelin star in 2007 followed by numerous prestigious awards including ‘Best UK Restaurant’, ‘Best Restaurant in Scotland’ and ‘Best Restaurant Experience’.

Tom has developed his “Nature to plate” philosophy.  The restaurant presents modern British cuisine influenced by French cooking techniques and an appreciation of the best quality ingredients available from Scotland’s natural larder.  The produce arrives daily, and all the meat and fish are bought in whole, and all the butchering and filleting is done in-house daily.

There are a range of taster menus, including vegetarian, and matching wine selections.  We chose the Summer a la carte menu, where two course cost £80 and three courses cost £95.  I added in an extra starter for myself!

The starter of Orkney scallops were baked in the shell, with the top of the shell sealed with pastry, with seasonal vegetables and a white wine, vermouth, and herb sauce.  The shell was opened at the table by the waiter.  This was an exceptional dish and one of the stand-out dishes of our tour of Scottish restaurants.

The starter of razor clams (called “Spoots”) from the Isle of Barra, broad beans, Chateau Leoube olive oil, Exmoor caviar was superb.  The clams were perfectly cooked and complimented by the caviar.  This was a £7.50 supplement, but well worth the extra spend.

Our third starter was the roasted Inverurie veal sweetbreads, served with first of the season girolle mushrooms and summer vegetable ragout in a separate bowl, with a Lardo di Colonnata (lardo on toasted brioche bread) served on the side.  The sweetbreads were perfectly cooked, slightly crisp on the outside and soft in the middle.  Another stand-out dish.

All three starters were of the highest standard and very enjoyable.

We both chose lobster for our main course.  This was a whole Newhaven lobster cooked a la plancha and grilled with an escargot butter, roasted Parma ham and squid.  For me, the lobster was slightly over.  The combination of lobster with the escargot butter and squid was very good.  This was a £15 supplement.

For dessert I chose the Scottish cherry and pistachio souffle, with macerated cherries, and a pistachio ice cream.  An excellent combination and the souffle was perfect.

We also chose the Blacketyside strawberry trifle with honey and Glenfiddich 15-year-old whisky.  The strawberries were very good, but the whisky wasn’t coming through for me.

The selection of whisky on the trolley was excellent, with rare examples ranging in price up to hundreds of pounds a dram.

The restaurant is very relaxed, the food is excellent, and the staff were knowledgeable and professional.

The problem for me was choosing my starter.  I opted for two, but I could have eaten them all……and will do next time I return.  This is definitely one of the best restaurants in the UK and I can highly recommend a visit.

Tom launched his debut book at The Edinburgh International Book Festival in August 2009 – From Nature to Plate: Seasonal Recipes from The Kitchin.  This was followed by his second book ‘Kitchin Suppers’ in 2012.

Michaela Kitchin – has more than 15 years of hospitality experience having worked in her native Sweden, with Anton Mosimann in London, Savoy London, The Savoy Group and at the world-famous 7-star hotel Burj Al Arab in Dubai before the couple settled in Tom’s hometown of Edinburgh.

There are two wine pairings to choose from:

We chose a Napa Valley, USA, white wine, a Newton Chardonnay Unfiltered 2015, rated 4.2 / 5 on Vivino.  This was buttery, with oak and vanilla notes.  A great choice with the shellfish courses we chose.  The retail cost is approximately £50 and it is sold at Kitchins for £126:

There is an extensive Scotch whiskey trolley with some superb top quality examples:

I chose a superb 1989 Rosebank (at £65 per shot) to accompany my coffee and petit fours: