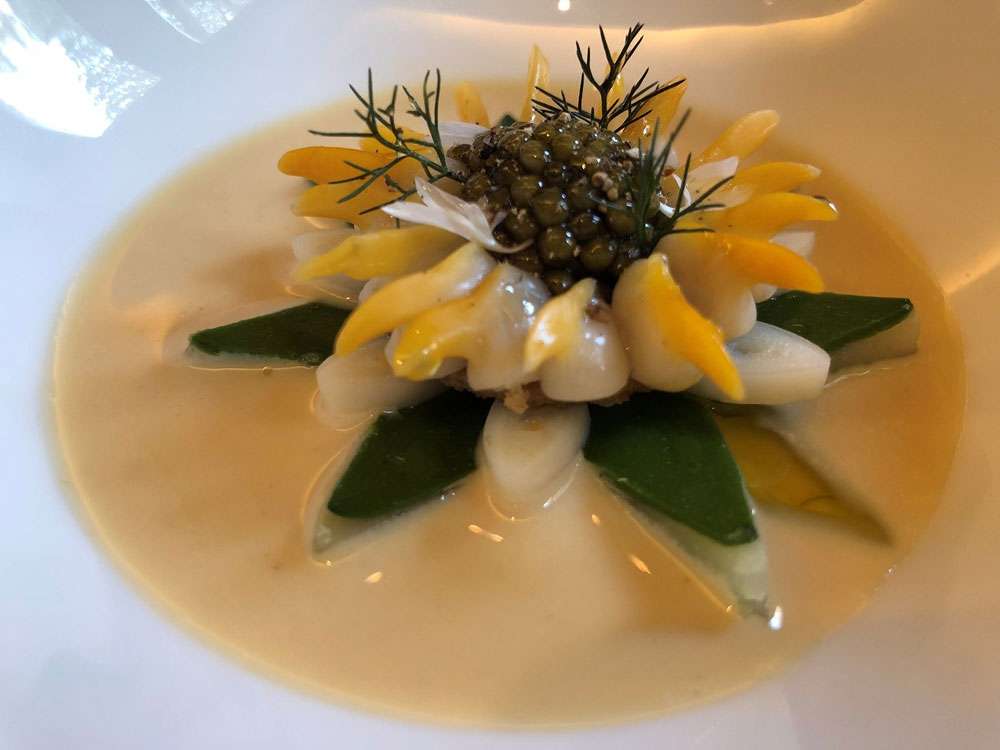 The Greenhouse serves superb two Michelin star modern French and European cuisine, accompanied by an extensive wine list of over 3,400 labels.  It is one of only four restaurants in the world to win the Wine Spectator Grand Award since 2005, the highest award given for an exceptional wine list.

The cuisine is imaginative, elegant and refined, with modern interpretations of classic dishes.  From the canapes served with my glass of champagne, all the way through to the petit fours, all of the dishes were exciting, original and perfectly cooked.

The service was superb as you would expect.  The staff are highly competent, and have an encyclopaedic knowledge of the food they are serving.

This is definitely one of the best restaurants in London, with fabulous food, impeccable service and an immense cellar.  I thoroughly enjoyed my gastronomic experience and highly recommend it.

It is worth every penny and I will be returning!

The Menus and Food:

Previously he worked for Hélène Darroze at the Connaught, where he led the team as Executive Corporate Chef, maintaining the London restaurant’s two Michelin stars as well as overseeing the Paris site.

Prior to this, in 2012, he was the Chef de Cuisine at New York’s Caviar Russe restaurant earning a Michelin star in 2013.

He has worked for Alain Ducasse, under the direction of Didier Elena and Tony Esnault at Adour in New York.  During his time the Manhattan restaurant achieved three Michelin stars in 2008 and two the following year.

The restaurant opened over 40 years ago.  In 1990 Gary Rhodes became Head Chef.  The menu became known for reviving British classics, including faggots, fish cakes, braised oxtails and bread and butter pudding.  He was awarded a Michelin star in January 1996.

It was acquired by MARC Restaurants in 2003 and gained a second Star in 2013.  Marlon Abela, chairman and chief executive of the Marlon Abela Restaurant Corporation (MARC) operates the Greenhouse as well as the Square, Morton’s Club and Umu.

Apart from the two Michelin stars, The Greenhouse is a member of Relais & Chateaux and Les Grandes Tables du Monde.

The restaurant is approached through a serene landscaped garden decorated with stone artworks by British sculptor Emily Young. Elements of the garden are carried into the restaurant with specially commissioned miniature sculptures on each table, as well as in the use of natural materials such as slate, marble and wood: Inside, the restaurant is bright and modern: To accompany the savoury courses, I chose a Chateau Yvonne Saumur Blanc 2015 from Saumur, France.  This is an excellent Loire Chenin Blanc and scores 4.3 / 5 on Vivino.  It has high acidity and is slightly off-dry.  There were hints of apple and pear, with excellent minerality. To accompany the desserts, I chose a Von Hovel Oberemmeler Hutte Riesling Auslese 2007, from Mosel, Germany.  This scores 4/2 / 5 on Vivino.  This is an excellent dessert Riesling with high acidity that balances the sweetness.  There were hints of yellow stone fruit.  It was very refreshing and matched the desserts perfectly.