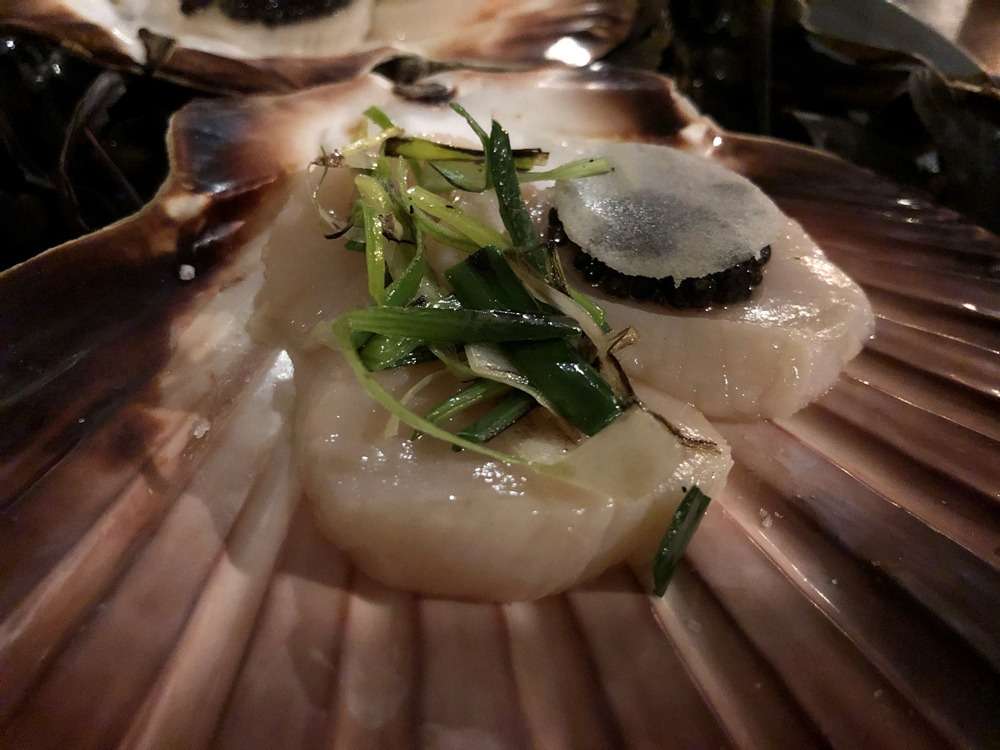 This was my first visit to this highly respected fine dining restaurant.  I have been missing out!!  We chose the tasting menu and the food was excellent.  The wine pairing was very unusual but carefully thought through and all the selections complimented the dishes.  The service was also excellent.

The restaurant has an excellent reputation for guest experience and leading the dining scene in Staffordshire.  I will definitely be returning for the Beef Wellington!

Chef Patron – Liam Dillon attended the College of Food at University College Birmingham.  After finishing his studies, Liam worked for Marcus Wareing at then 2 Michelin star The Berkeley for 6 months.

He then travelled to Australia and worked at Quay in Sydney, with chef Peter Gilmore for 6 months.

Next, he worked with Will Holland as Junior Sous Chef.  Will held a Michelin star at La Becasse in Ludlow.

Under the mentorship of Will Holland, Liam travelled to New York for stints in the kitchen at Eleven Madison Park (at the time eighth in the world) and Restaurant Daniel, both three stars, and two-starred Gilt.  He was offered a permanent role at Eleven Madison Park, but experienced difficulties in getting a working visa.

Liam won an internship at the world’s then best restaurant, Copenhagen’s Noma for 2 months.

He joined Tom Sellers’ new Michelin-starred Restaurant Story as senior chef de partie for 18 months and was then asked by Tom Sellers to help set up The Lickfold Inn in West Sussex.

He was awarded ‘Best Chef’ at the Midlands Food Drink & Hospitality Awards.

The Boat Inn has now been listed in the Michelin Guide ever since it opened.

Inside the restaurant you can see directly into the kitchen:

A fridge dedicated to keep the herbs in top condition:

The first wine was served to accompany the snacks.  It was a Nyetimber Cuvee Cherie Demi-Sec NV sparkling from Sussex, UK.  This scores a 3.8 / 5 on Vivino.  It is made from Chardonnay grapes and has hints of honey and pear balanced by lemon.

To accompany the burrata we were served a Cave de l’Ormarine Les Prades Picpoul de Pinet 2018.  This scores 3.8 / 5 on Vivino.  It is a Languedoc-Roussillon white wine made from Picpoul Blanc grapes.  This is an excellent, fresh white wine with citrus and tropical fruit notes, with high minerality.  It pairs very well with lean fish, pasta, poultry and is a great aperitif.

To accompany the beef short rib we were served a Palladino Biferno Riserva Rosso 2015 from Molise, Northern Italy.  This scores a high 4.1 / 5 on Vivino.  This has oak, chocolate and vanilla notes, with some blackcurrant and cherry in the background.  It is a light and dry red wine, that pairs well with lamb, beef and game.

The optional foie gras course was accompanied by a Lucien Lurton Garonnelles Sauternes 2017 from Sauternes, France.  It scores a 4.0 / 5 on Vivino.  This beautifully sweet white wine is made from Sauvignon Blanc and Semillon grapes.  It has orange, apricot and ripe pineapple notes with nice acidity.  It is made from the intense, naturally sweet grapes that have undergone “noble rot”. The grapes are picked by successive berry selection, each time taking only those affected by the Botrytis Cinerea which concentrates the sugars.  Then a rigorous sorting process is undergone to ensure only the best fruit is used.  The must is fermented in casks.  The maturation is for one year in barrels.  It pairs well with fruit desserts, blue cheeses and foie gras.

To accompany the fish courses, we were served a Vin de France Clos Ventas Les Pointes John Sanderson 2016.  Made from 80% Marsanne and 20% Grenache, this white wine is fresh and rich, with yellow fruits and citrus notes.    The domain is located in Saint-Jean-de la Blaquière in Languedoc (Terrasses du Larzac).  It was created in 2013 by John and Kirsty Sanderson. The 4.5-hectare vineyard is planted with Cinsault, Grenache, Syrah, Mourvèdre, Marsanne and Grenache Blanc grapes, and is cultivated according to biodynamic principles.  It worked very well with the scallops and trout and would make a great aperitif wine.

To accompany the venison we were served a red version of the previous wine.  This was the Vin de France Clos Ventas Les Pointes John Sanderson 2015.  Made from 100% Cinsault grapes.  It is a light red that would pair very well with veal or poultry:

To accompany the chocolate dessert, we were served a M. Chapoutier Banyuls Rimage Vin Doux Naturel 2018 from Banyuls, France near to the Spanish border.  This is a red dessert wine that scores 3.8 / 5 on Vivino.  It is made from the Grenache grape and is almost like a port.  It has raisins and ripe fig notes, and a slight bitter-sweet ending.  It would pair well with mature or cheddar cheese, or maybe beef.