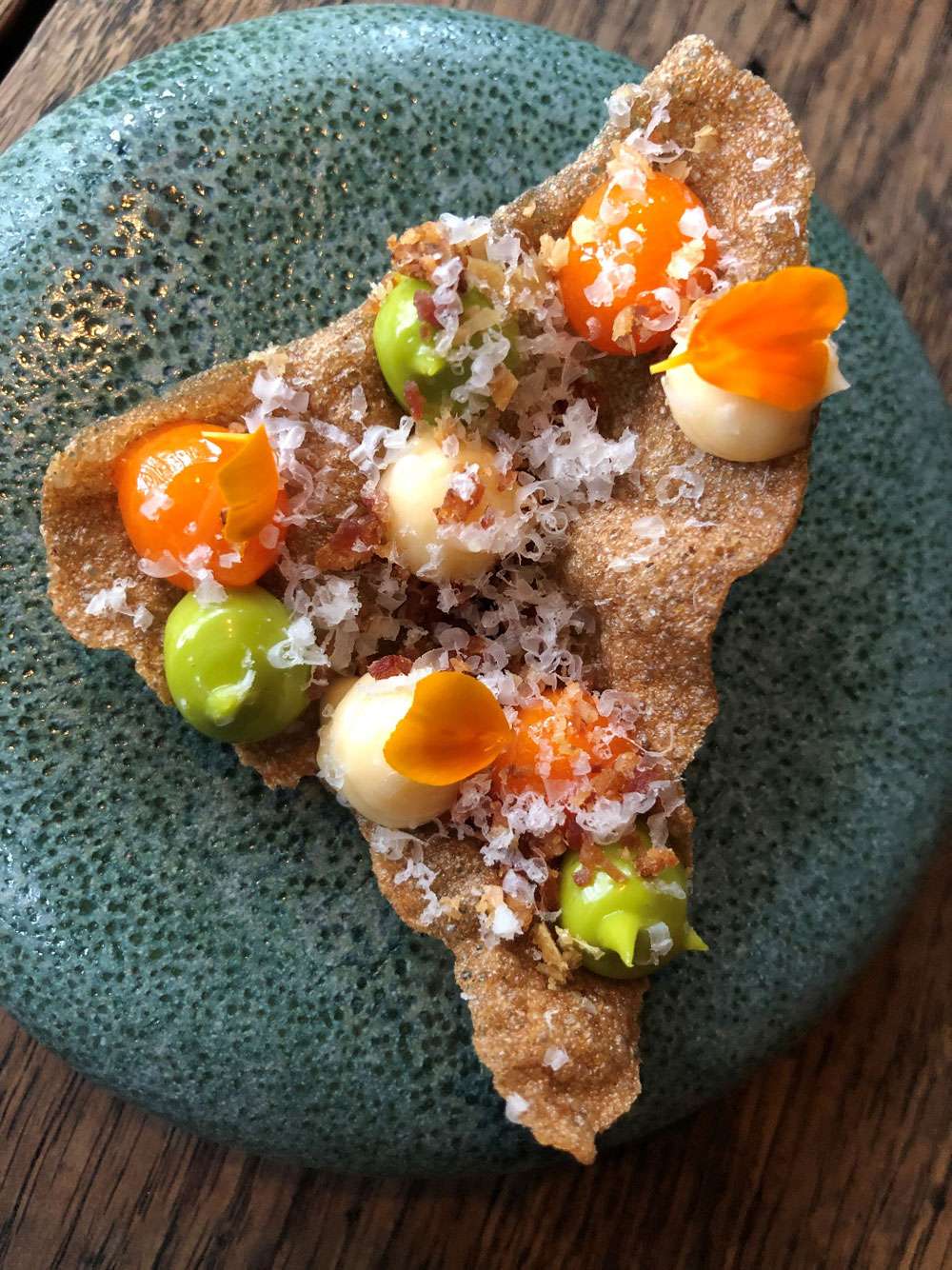 The Black Swan at Oldstead, Oldstead, York YO61 4BL

Set within the stunning landscapes of the North York Moors National Park, The Black Swan is a Michelin-starred, 4 AA Rosette restaurant, with rooms, by chef Tommy Banks.

This is the first time I have visited The Black Swan at Oldstead, although I have had a number of Made in Oldstead food boxes over the past months.

When we visited, the restaurant only offered a tasting menu, and there was no a la carte.  The tasting menu consisted of two amuse bouche, followed by six savoury courses, plus bread, a pre-dessert and dessert, and then chocolates.  The cost was £125 per person.  An additional cheese course can be added for a £19 supplement.

Two amuse bouche, a charred lettuce with Yorkshire pecorino on crispy sourdough and a smoked eel and fermented turnip wrapped in an excellent crispy pastry cigar, were served in the bar with our pre-dinner drinks.  Both were very good.

The restaurant is situated up a steep flight of stairs, but the toilets are situated adjacent to the bar on the ground floor.  The restaurant is airy, with a high roof, and great views over the kitchen garden.  The tables were well-spaced, and all the staff wore face masks and regularly sanitized their hands.

The first starter course was a salt aged beef tartare, English truffle, crispy shallots and grated Darling blue cheese.  This was excellent, with the beef perfectly chopped and the truffle complimenting the cheese and earthy beef flavours.

The second starter was an exceptional lobster claw and umeboshi (pickled or salted) rhubarb.  This was a “prawn cocktail” taken to a higher level and it was one of the stand-out courses of the night for me.  I only wish there was more of it.  It is served in a tall dish, but the cocktail only fills the top quarter.

Following the excellent bread and butter, the next course was a beef tomato, English mozzarella and basil sorbet.  This was very good and readied us for the main courses to follow.

The first main course was barbecued lobster tail, pea and nasturtium.  This was excellent, the peas were so fresh they popped in your mouth and the lobster tail was perfectly cooked.  The second was an outstanding loin of cod, with langoustine, battered Oldstead onion, and a fermented onion juice and cream sauce.  This was another stand-out course for me.  Finally, there was duck, cherry and beetroot with a duck fat brioche served on the side.  Again, this was outstanding, with the duck perfectly cooked.

The desserts comprised a sweet cicely, blackcurrant and sheep’s yoghurt compote pre-dessert, followed by some excellent strawberries, with strawberry jelly, ice cream and lovage.  These were both good.

This was a well-balanced dinner, and you were not left feeling as though you had eaten too much.

The staff were very professional and very enthusiastic and knowledgeable about the food and restaurant.

The cooking philosophy focuses on the best, seasonal, fresh local produce from the family’s smallholding or foraged locally.  In 2013 the family developed a three-acre kitchen garden in the field next to the restaurant. Having the garden allowed them to grow food that was unique and to serve ingredients that cannot be found elsewhere (such as Crapaudine beetroot, Black Truffe potatoes and Wineberries).

Each course is served in individually crafted plates and bowls made especially for that course by local artist Jane Schaffer.

We stayed overnight in one of the rooms in the cottage that is a 30-metre walk from the pub.  The room was well furnished with a nice four-poster bed.  The adjoining en-suite bathroom had a bath and walk-in shower.  This room was perfect for a one-night stay while you enjoy the food in the restaurant.

This is a strong one-star restaurant, located in a beautiful village in the North Yorkshire Moors.  We thoroughly enjoyed our visit and will be returning.

Tommy Banks comes from a farming background, with the Banks family farming in and around Oldstead for the past five generations. The Banks family purchased their local pub, The Black Swan, in 2006.

Although he has no formal training as chef, he worked several unpaid stages in Michelin-starred restaurants, including a week spent in Raymond Blanc’s Le Manoir aux Quat’Saisons.

The restaurant at The Black Swan first won a Michelin Star in 2012 with Adam Jackson as chef. When Jackson left to set up his own restaurant in June 2013, Tommy took over as head chef.

In 2013, at the age of twenty-four, Tommy became the youngest Michelin-starred chef in Britain when The Black Swan retained its star.

In 2016, The Black Swan also gained a 4th AA Rosette making it unique at the time as the only restaurant in Yorkshire to hold a Michelin Star and 4 AA Rosettes simultaneously.

In 2017, The Black Swan was named ‘The Best Restaurant in the World’ by customer review site TripAdvisor.

In 2018 Tommy and his close friend and business partner Matthew Lockwood opened Roots restaurant in the centre of York.  Also, in 2018, the Black Swan was awarded the Best Restaurant in the UK by Food and Travel Magazine.

In 2019, Tommy won the ‘Local Food Hero’ award at the Observer Food Monthly Awards and both The Black Swan and Roots were named in Restaurant Magazine’s Top 10 and Restaurants in the UK (at 29 and 42 respectively).

In 2020, Roots and the Black Swan received the accolade of the UK’s Best Fine Dining Restaurant in TripAdvisor’s travel awards.

The restaurant is based at a 16th Century pub in the beautiful village of Oldstead at the edge of the North York Moors.  Rooms are available on site as well as in a small house about 30 metres from the pub:

Our room was situated in the small house near to the Swan, about a 30 metre walk away.  The room was spacious, well furnished, with en-suite bath and walk-in shower, and a four-poster bed:

Downstairs, when you enter the main door, there is a bar area with tables, so you can order a drink.  There were no ales on tap when we visited.  The restaurant is situated up a flight of stairs and is light and airy, with great views over the countryside and extensive kitchen garden.  The tables were spaced well, and staff wear masks:

There were two matching drinks packages available, priced at £75 or £150 per person.

We chose a Seifried Estate, Pinot Gris 2020 from Nelson, New Zealand to accompany our initial courses.  This aromatic white wine has slight floral notes and is slightly off-dry.  It is rated 4.0 / 5 on Vivino.  This is sold at £46 per bottle at The Black Swan with a retail price of £15.