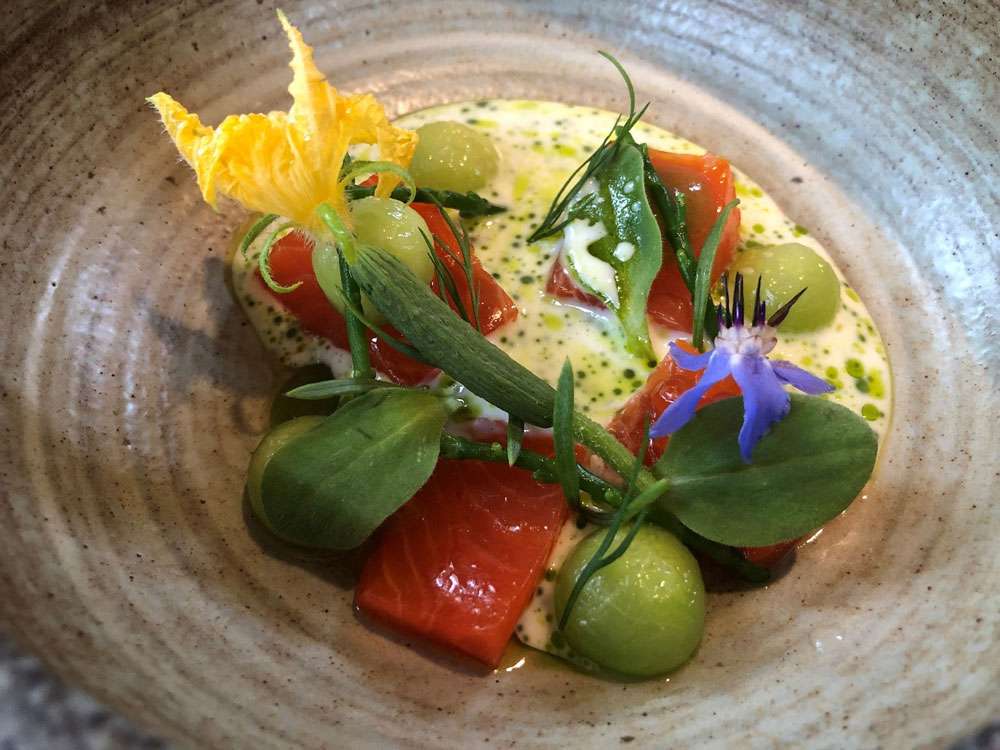 Chef Patron: Andreas Antona trained initially at Ealing Technical College, after which he spent six years working in hotels in Germany and Switzerland, before working under Anton Mosimann at The Dorchester and at the Ritz Hotel.  He also worked with Michael Quinn MBE, Britain’s first celebrity chef.

From 1987 he spent three years as Head Chef at Birmingham’s Plough and Harrow Hotel, at a time when its restaurant was among the finest in the Midlands.

He left London to work in the Midlands and it was in the renowned Plough and Harrow in Birmingham where he began winning international acclaim.

In September 1993, Andreas opened his first restaurant Simpsons in Kenilworth and was among the first restaurants in the area to win a Michelin star.  The restaurant’s name being taken from that of the chemists shop owned by his father-in-law that used to occupy the property.  Simpsons was awarded a Michelin Star in 1999 and moved to a grade II-listed Georgian villa in Edgbaston, Birmingham in 2004, by which time it had built a European-wide reputation.

Andreas left the kitchen to focus on life as a restaurateur and took over The Cross in Kenilworth in 2013, which was awarded a Michelin Star in 2014 just shortly after opening.  He is also part of the team behind Pure Bar & Kitchen in Birmingham.

He was a mentor to several other successful Birmingham chefs early in their careers, including Glynn Purnell, Luke Tipping and Andy Waters, and has been described in The Times as “the godfather of modern Birmingham food”.

Chef Director Luke Tipping entered the chef profession by mistake when his father found him a job at the Plough and Harrow – a once renowned hotel restaurant in Birmingham. It was during his time there that he met Andreas Antona.  After five years at the Plough, Luke moved on to set up Simpsons in Kenilworth with Andreas.

Apart from winning the coveted Michelin star at Simpsons, in 1999, Luke was awarded the first ever Midlands Chef of the Year Award.  He also received a Professorship of Culinary Arts by University College Birmingham in October 2010, in recognition of his efforts in promoting the next generation of kitchen stars.

Senior Sous Chef Leo Kattou started cooking in his family-run fish and chip shop Marina Fish Bar in Coventry, before going on to study at College of Food in Birmingham.  While at college he was offered a one-month full-time work placement at Simpsons and the rest is history. Leo entered British Culinary Federation Young Chef of the Year three times coming in second place each time and was a British Culinary Federation Chef of the Year 2018 finalist.  He also entered Masterchef: The Professionals in 2017 where he reached the semi-finals.  He cooked for us on our visit and his food is exceptional.

General Manager – Gianluca Austin-Rizzo was appointed GM in 2018.  He was previously beverage manager at the Cottage in the Wood hotel in Malvern, Worcestershire.  He has worked at The Waterside Inn, Bray and was manager of the White Hart Inn in Nayland, near Colchester, and sales manager for Eurowines, a London-based wine importer with a focus on Italian wines

Restaurant: Led by chef director, Luke Tipping, Simpsons has earned a well-deserved reputation for offering one of the best dining experiences in Birmingham.  They have held a Michelin star since 2000.

The restaurant is modern and spacious with sufficient space between tables, so you don’t have to listen to your neighbour’s conversation.

The gardens are well maintained and are a perfect location to take your aperitifs on a warm afternoon or evening.

Luke is renowned for producing stunning flavours inspired by the very best in season produce.  The dishes are vibrant, reflecting the seasonality and have a slightly Scandic style packed with flavour.

If you are dining in Birmingham, Simpsons will provide an extraordinary experience.

Review: Luke is always looking for fresh inspiration and only ever uses the very best seasonal produce.  The tasting menu was well thought through and the selection of dishes all worked well as a whole.  The dishes were visually appealing and colorful.  The tastes reflected a British Summer and all the courses were packed with flavor.

We were allowed to swap the duck dish on the taster menu with the turbot from the a la carte menu.  However, this caused another problem, because the turbot is accompanied by an oyster cream sauce and I have an allergy.  So, without hesitation, the chef agreed to create another turbot dish for me with summer truffles and leaks, which was outstanding.

There are two wine pairings available and we chose the prestigious Iconic paring.  The wines were all exceptional, most with Vivino ratings well above 4 out of 5.  The wines all matched the food extremely well, and there had obviously been a lot of planning in choosing the best combinations to enhance the food flavors.

The front of house team was also exceptional.  This team are very knowledgeable, friendly and took time to answer my many questions.  Managed by Gian Luca, we were lucky to have Ashley Shepherd and Giuseppe Fazio serving our table.  Our sommelier for the evening, Marketa Dlouha, is clearly an enthusiastic wine connoisseur with an incredible knowledge of the wines she served to us.  I learnt a lot!!

Everything about the evening was perfect.  The food, wine and service are all top-drawer.  I highly recommend this restaurant, and I am looking forward to returning soon.

We enjoyed our aperitifs in the garden:

In recent years, the restaurant has undergone a transformation in its design resulting in a bright, modern dining space inspired by the colours and shapes of nature:

The restaurant is spacious, so you do not have to sit at tables that are too close together.  The tables are large so there is space to spread out:

I was allowed to visit the kitchens and meet the chefs who prepared our dinner.  The kitchens are relatively large and immaculate as you would expect:

The kitchen, cleaned down at the end of the service, is spacious:

I had the pleasure of meeting senior sous chef Leo Kattou who kindly took some time out to show me the kitchen:

The Iconic Wine Selection started with a glass of 2008 Dom Pérignon to accompany the amuse bouche.  Each bottling of Dom Pérignon contains grapes only from a single year, showcasing that vintage’s unique characteristics.  Dom Pérignon does not produce a non-vintage wine.  In Champagne, only certain vineyards are classified as Grand Cru, and a Champagne must only be made from these vineyards in order to qualify as a Grand Cru Champagne.  However, Dom Pérignon is made with many grapes from Grand Cru vineyards, but each blend always includes grapes from the original plot in the Abbey of Hautvillers, which is classified as Premier Cru fruit, so Dom Pérignon is not classed as a Grand Cru.  Dom Pérignon is always a blend of Pinot Noir and Chardonnay, although the percentages change from vintage to vintage. The percentage is usually somewhere between 50/50 and 60/40 favouring one of the grapes.  The 2008 is 53% Pinot Noir and 47% Chardonnay.

The 2008 Vintage Dom Pérignon has achieved a high 4.5 on Vivino.  This is a big, rich champagne!  Its nose has toast, with brioche and almonds.  The taste is slightly apple and it has flint and citrus.  A fabulous choice:

Because the bubbles in Dom Pérignon are created at a lower pressure than those for other sparkling wines, Riedel has created a specific glass shape for Dom Pérignon:

The glass has the name “Dom Pérignon” etched on its base on one side and Riedel on the other side:

The Spitzer Point Gruner Veltliner Smaragd 2017 was served with the sea trout.  This is from Wachau, Austria and scores a 4.1 in Vivino.  Smaragd (meaning “emerald”) is the denomination of the best Wachau wines.  This Gruner is a well-balanced wine with straw, nuts and vanilla on the nose.  It is dry with high acidity and has tropical fruit in the background, and a rich and round palate with a crisp and refreshing finish.  It is an absolutely stunning wine:

The quail was accompanied by a 2016 Spottswoode Sauvignon Blanc from North Coast Napa, USA.  This scores a 4.1 on Vivino.  This has pear, grass and grapefruit on the nose, but much more refined than the NZ wines.  It is a fabulously refreshing wine and matched the courgette and lovage extremely well:

The beetroot course was accompanied by a light orange rose La Suffrene Bandol 2017 from Bandol, France.  This has a 3.9 rating on Vivino, but should be higher maybe!  It has a nose of strawberry, prunes and berries.  Its dry on the palate with a lingering finish.  It is a blend of Grenache, Mourvedre, Carignan and Cinsault grapes.  It worked extremely well with the iced goats’ cheese that was in the dish.  The fruit balanced the high acidity of the beetroot:

The Orkney scallop course was accompanied by a 2015 Knipser Mandelpfad Riesling from Pfalz, Germany.  This has a 4.2 rating on Vivino.  This has great minerality! On the nose you have passion fruit, honey and some floral.  On the palate you have great minerality that works well with the shellfish.  There is a slightly oily texture, it is dry and full bodied.  It is designated a top quality Grosses Gewächs wine (GG), meaning it is the product of a hand-harvested single vineyard with a maximum yield of 50 hl/ha:

The turbot course was accompanied by a 2015 Vincent & Sophie Morey Santenay Les Hates, from Santenay, France.  This has a 4.1 rating on Vivino.  This is a light 100% Pinot Noir red wine that works well with the turbot.  It is soft and smooth with berries and savoury spices:

The desserts were accompanied by a Gerovassiliou Malagousia Late Harvest 2009 dessert wine.  This is from Epanomi, Greece and scores a 3.8 on Vivino.  It won a bronze medal with 86 points in the 2016 Decanter World Wine Awards.  It is 100% Malagouzia grapes (a naturally sweet grape) and aged 3 years in French oak barrels.  It has a medium straw gold colour, a rich texture and apricot, peach and exotic fruits on the palate, with high acidity and a sweet finish.  Perfect with the peach dessert: