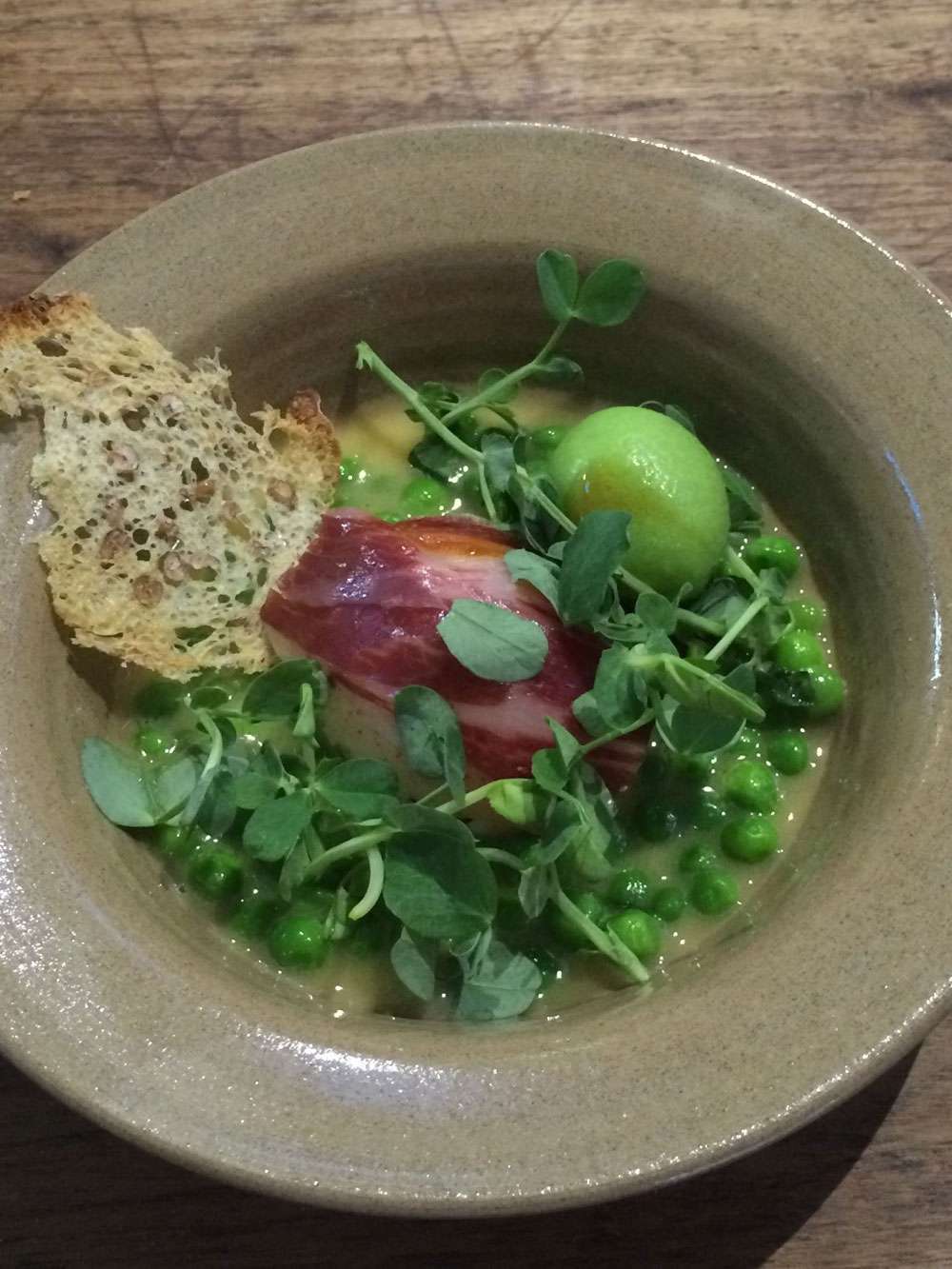 Raymond Blanc hired Bains as one of eighteen staff members for the opening of the first Le Petit Blanc in Oxford in 1996.  He moved on to work at the London-based L’Escargot for 3 months.  He won the Roux Scholarship in 1999, and this enabled him to travel to France to work at the three Michelin starred Le Jardin des Sens, before returning to the UK and opening his own restaurant.  He became head chef at the Hotel des Clos in Nottingham, which was relaunched as Restaurant Sat Bains with Rooms in November 2002.  He was awarded a Michelin star in 2003 becoming the first restaurant in Nottingham to win a star.  He was one of the winners on the BBC show Great British Menu in 2007.  His second star was awarded in 2011.  He runs the restaurant with his wife Amanda.

This kitchen bench seats the diners in the restaurant.  There are high stools in the pastry kitchen for four guests.  We saw an evening service from all angles and were served by the chefs whilst watching them prepare the food.  We were also given a tour of the kitchen, the vegetable and herb gardens, and the development kitchen, named Nucleus, where new dishes are created and tested.

Review: We started with a drink in the bar.  I was made to feel a little foolish when I ordered a dry martini cocktail, and the barman explained that they do not sell cocktails.  So, I had to ask for a straight gin (double No 209), with an ice cube and olives, which I stirred myself.  I found this all a bit strange, but this was the only negative point of the night.  Everything else was exceptional.

We were escorted through the restaurant to the kitchen and met Sat Bains and his brigade.  We were seated at the kitchen bench, which is a large table, with four high chairs adjacent to the pastry section, with a view of the majority of the kitchen.  The chefs were very friendly, and Sat took time out to come over and chat with us.  The chef working in the pastry section was very happy to chat and answer all of our questions whilst she prepared our food and all her dishes for the rest of the diners.

These chefs are very proficient and professional.  There are no raised voices, and no swearing (or not much!), and everything they do seems to be practiced and choreographed.  Everything is timed, and everybody knows what they are doing.

Sat’s food is remarkable and worth every star.  The experience at the restaurant, and in the kitchen, was exceptional and a highlight in my gastronomic adventures.

One of the chefs took us to view the vegetable and herb gardens and we walked round the food laboratory.  They even took refreshments out to our driver who had parked in the car park and was waiting for us (thanks Paul!).

We went for the 10-course tasting option with wine pairings, and added in an extra course which was Sat’s famous duck egg.  There is a 7-course option which is slightly less expensive.

This tasting menu isn’t simply a selection of dishes from an a la carte menu, it is a very clever and well thought out partnership of courses that takes you through a taste journey.