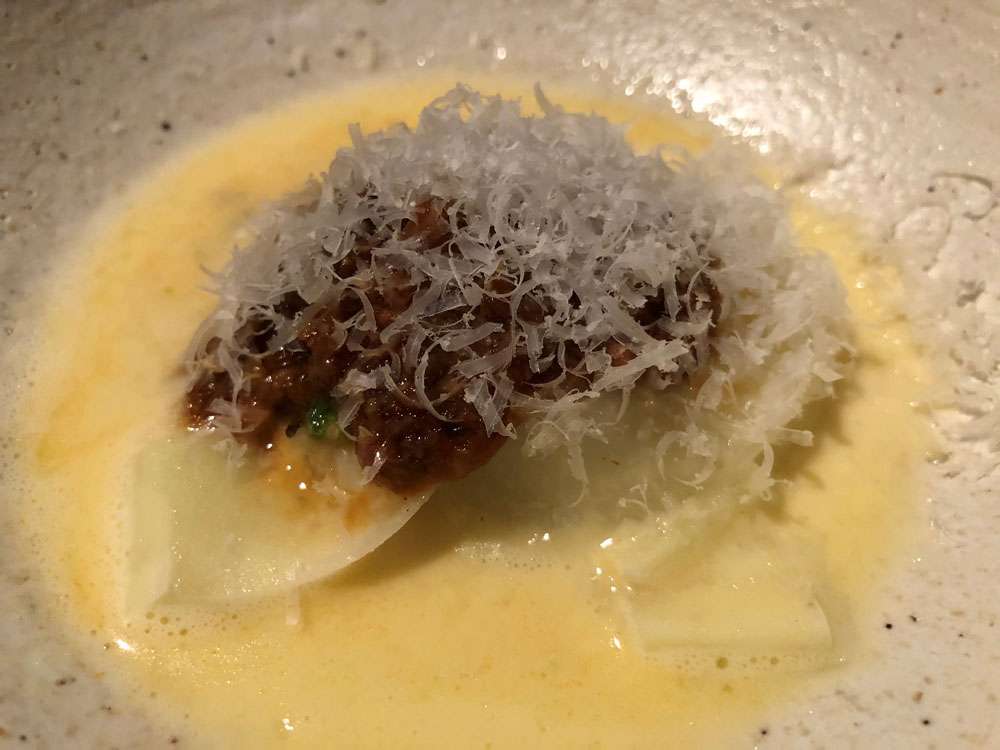 Sat’s food is definitely “excellent cooking that is worth a detour”!  A lot of thought has clearly gone into designing a menu that follows Sat’s five tastes philosophy – sweet/salt/sour/bitter/umami, and this is reflected on the menu where each course has a key representing the dominant tastes present.  This is very clever!  The combination of tastes and textures in Sat’s food is outstanding.

We chose the 10-course menu with accompanying wines.  For me, the standout courses were the veal sweetbread, superb steam-fried potato, partridge ragu and an excellent turbot.  My least favourite was the savoury custard dish, which was not to my personal taste.  All of the dishes were well executed and packed with flavour.  The presentation was excellent.  This was very impressive cooking from a chef who’s at the top of his game.

The service was friendly, and professional.  The waiters and sommelier were very knowledgeable and took time to explain the dishes to us in detail.

We stayed in one of the rooms and also enjoyed a very good breakfast.  You can book a package that includes the room with dinner.  The room was conveniently located across the courtyard from the restaurant.  It was a converted stable, with exposed oak beams, a dressing room, and bathroom with shower over the bath.  The bath was quite high and might be difficult to access if you have mobility challenges.  The breakfast was excellent and included a selection of a starter and main course, a selection of cooked eggs and some very good homemade crumpets.

Dining at a 2 Michelin Star restaurant is usually expensive, and this was no exception.  However, the food, service and overall experience were all extraordinary and very memorable.  It was worth every penny.

The Food and Kitchen:

Raymond Blanc hired Sat as one of eighteen staff members for the opening of the first Le Petit Blanc in Oxford in 1996 and then he moved on to work at the London-based L’Escargot for 3 months.

He won the Roux Scholarship in 1999.  This allowed him to complete a stage at Le Jardin des Sens, a three Michelin Star restaurant in the south of France.

He became head chef at the Hotel des Clos in Nottingham, which was relaunched as Restaurant Sat Bains with Rooms in November 2002.  He was awarded a Michelin star in 2003.  His second star was awarded in 2011.

Sat competed in the 2007 series of Great British Menu, winning a place at the final banquet for his starter of egg, ham and peas, which won a perfect ten score from each of the three judges.

Sat’s cookbook, Too Many Chiefs Only One Indian, was released in September 2012 and is still regarded as one of the most beautifully designed and influential cookbooks from a British chef.

Head Chef – John Freeman started as a Commis Chef working voluntarily on his days off from his job in 2002 at Restaurant Sat Bains at Hotel des Clos.  John was appointed as Head Chef in 2005.

Hattingley Valley, Classic Reserve, Sparkling from England.  Scores 3.8 / 5 on Vivino.  This is a solid English sparkling wine, that is biscuit with brioche and lemons on the nose, with some lemon sherbet on the palate.  This is from Chardonnay, Pinot Gris, Pinot Meunier and Pinot Noir grapes.  This was served with ‘The Introduction’: Hugel Estate Riesling 2015, from Alsace, France.  This scores 4.0 / 5 on Vivino.  It has mineral and petroleum notes, with citrus and grapefruit on the palate.  It is dry, crisp, with refreshing acidity.  This was served with the smoked eel, turnip, apple and truffle: Lopez de Heredia Vina Tondonia, Reserva Blanco, 2005. This scores 4.2 / 5 on Vivino. It has oak, vanilla and some caramel on the nose, with honey, apple and sultana and some minerality on the palate.  It has some sherry qualities, like a Manzanilla.  It is slightly oxidised.  It was served with the veal sweetbread, miso, cabbage coleslaw, green cabbage puree and sauce Robert: Louis Michel & Fils, Chablis Grand Cru “Vaudesir”, Chablis, France.  This scores 4.1 / 5 on Vivino.  It has minerality, and honey on the nose.  There is apple, peach and pear on the palate.  Its crisp with good acidity.  It was served with the Steam-fried potatoes with Rossini Baerii prestige caviar, samphire and a seaweed velouté:

Verum, Pinot Noire, 2018 from Rio Negro, Patagonia Argentina.  This scores 3.6 / 5 on Vivino.  It has cherry and red fruit on the nose.  It is earthy with hints of mushroom on the palate.  It was served with the partridge ragu, turnip tagliatelle, wild garlic salsa verde, 2014 vintage parmesan: Philippe Alliet, Coteau de Noire Chinon, 2018, from Chinon, France.  This scores 4.0 / 5 on Vivino.  On the nose there are hints of chocolate, plum, earth and leather.  There are plum, and dark berries on the palate.  It is very dry and spicy.  It is made from the Cabernet Franc grape.  It was served with the savoury custard, wild mushroom, and sea leek: Chateau Changyu Moser XV, Bland de Noir, Cabernet Sauvignon, 2017, from Ningxia, China.  This scores 3.3 / 5 on Vivino.  There are delicate hints of melon, apple and peach on the nose.  There is strawberry and red fruit on the palate.  This is a very unusual wine, with low acidity.  It was served as a supplement with the Coddled egg and Baerii caviar: Meyer-Nakel, Pfarrwingert Spatburgunder, 2015, from Ahr, Germany.  This scores 4.0 / 5 on Vivino.  There are raspberry, and red fruits on the nose.  On the palate there is minerality, cherry, strawberry and some smoke.  A Spatburgunder is also known as Pinot Noir.  It was served with the Cornish turbot, morels, wild garlic, and truffle tapenade: The 2010 Ice Cider, Domaine Leduc-Piedimonte, Quebec, Canada.  The cider is made like an ice wine and has a strong apple aroma.  This was served with the chocolate marquise, long pepper and 25-year-old Balsamic vinegar: Zuccardi Torrontes Tardio is a late harvest Torrontes from Argentina’s Mendoza region. It is a delicate, light dessert wine with aromas of pears and apricots and flavours of fresh fruit and honey.  During the winemaking process the fermentation is stopped by a sudden drop in temperature so that not all of the sugar is converted to alcohol and a rich sweetness remains in the wine.  This was served with the potato “waffle” made from a Maris Piper potato, served with cinnamon, vanilla ice cream, Creme Patissiere, and a blackcurrant jam: