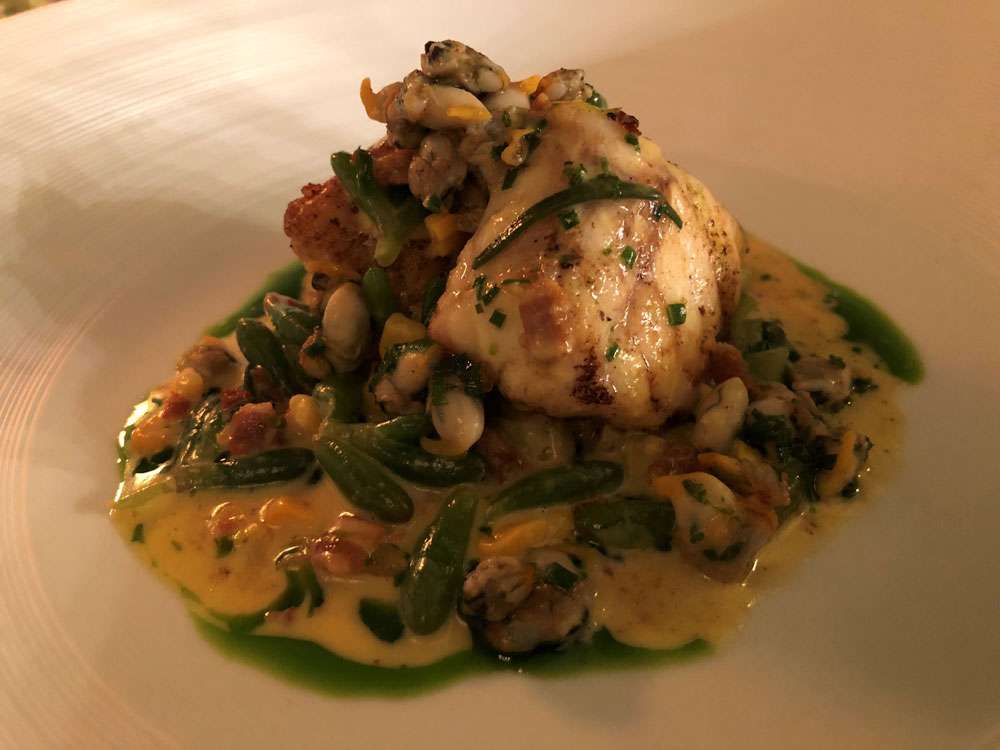 Arriving early so we could enjoy a cocktail or two, we were warmly greeted and shown to a table in the bar.  The cocktails were excellent.

While we were enjoying our drinks, we perused the menus.  There was a very well-priced Market Menu, as well as an a la carte menu with a wide variety of starters including oysters, a “tails of the sea” fruits de mer, scallops or smoked salmon, and a great selection of main courses from high-end beef and lobster dishes to fish and chips.  This is a menu that I would like to revisit.

We chose tempura oysters and a fabulous beef tartare to start, with lobster and monkfish as main dishes.  All the dishes were exceptional.  The beef tartare starter and monkfish main course were magnificent.  The lobster was unusually cooked in a red pepper butter and served with a potato salad.  I had thought thermidor was the ultimate lobster dish, but I was wrong!  This red pepper with the lobster is an outstanding combination.

We were seated near the serving hatch so we could watch the chefs at work and examine some of the other dishes being prepared.  I will be returning for the Beef Rossini which looked fabulous!

The service was friendly, attentive and relaxed.  After the meal I had the chance to meet Executive Head Chef Lee Smith who gave me a tour of his kitchen and we chatted about his time on Great British menu and his upcoming plans.

This is a restaurant that I highly recommend.  Both the food and the service are excellent, and the prices are very reasonable.  When I return to Jersey this will be a restaurant that will be on top of my list.

Lee featured in The Great British Menu Series 14 (2019), winning the South West Region heat.  His starter – “Beets of the Sixties” involved a pesto that initially he couldn’t taste prior to plating because of his hazelnut allergy, which he replaced with peanuts in the judging round.  The pesto was piped on the plate, and then a beetroot tartare and pickled beets were added, with viola flowers, a rocher of beetroot sorbet and a scoop of smoked cream cheese.

The fish course – “A Whiter Shade of Pale” featured pan-fried turbot topped with turnip pappardelle, Champagne and turnip sauce, a spoonful of caviar and a froth of Champagne emulsion foam with a pickled turnip.

The main course – “Welcome to the Nineties but Why All the Beef” was a homage to the musical rivalry between Oasis and Blur.  The sirloin was sous vide then pan-seared and basted in Jersey butter, then sliced and topped with bone marrow jam, alongside pickled Thai shallots.  The griddled hispi cabbage was covered with yeast extract butter and topped with strands of celeriac remoulade and celeriac crisps.  Truffle was grated on top, accompanied by scatters of nasturtium leaves.  The dish was presented on vintage-style record players with a beef sauce on the side.

The dessert – Beatles-inspired dish “Strawberry Fields” was the only dish that week that gained a perfect score from judge Daniel Clifford.  Cylinders of strawberry parfait were rolled in sheets of strawberry jelly, sliced, then added to plates of piped vanilla and lime flavoured yogurt. Compressed strawberries, basil gel, strawberry pastilles, white chocolate coated almonds, meringue and a basil and lime sorbet were added.

Samphire offers all-day dining options in the main restaurant, a private dining room, an al fresco terrace, 2 bars, and an all-weather rooftop garden. You can enjoy breakfast, a quick coffee, lunch or dinner.

You can watch the chefs at work through the serving hatch in the restaurant:

The restaurant area with approximately 50 covers:

The kitchen after service:

The kitchen cleaned down after the evening service: