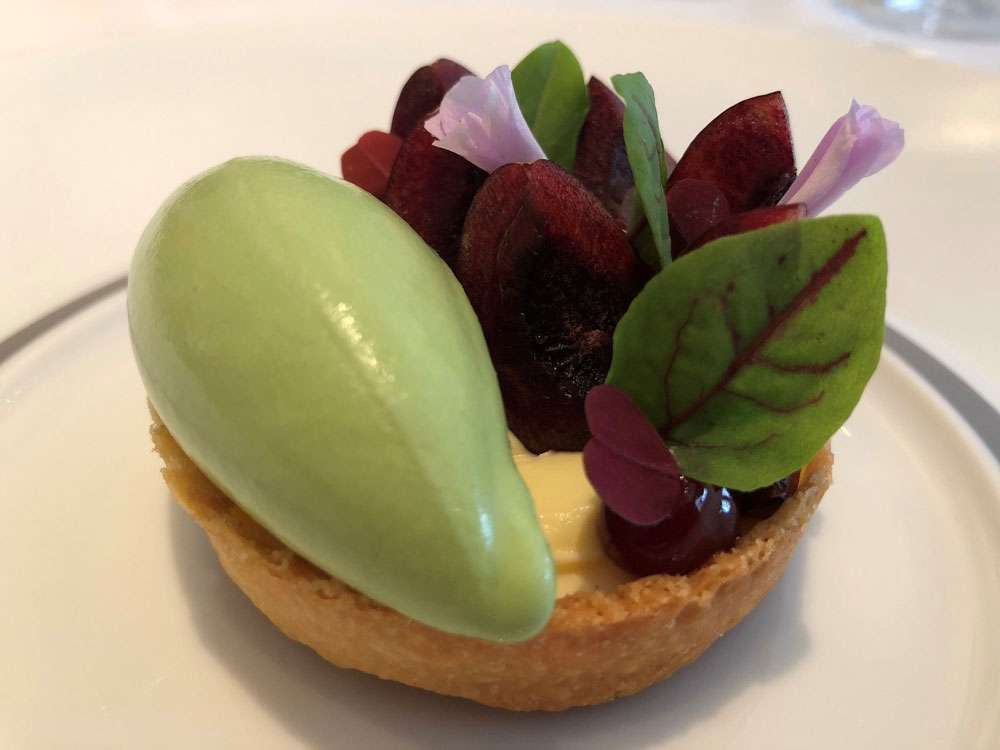 This is one of Britain’s finest restaurants and London’s longest running with three Michelin stars.  It shows!  The food was excellent, even exceptional, and the service was outstanding.

We were invited to have an aperitif in the reception area, and we chose the Seasonal Inspiration menu with the wine pairing.  There were no problems for us to swap one of the grouse main courses for a turbot, and order the Tarte Tatin as an extra dessert.  We were served some exceptional cheese balls to accompany the champagne.

The restaurant decor is modern with clean lines, and large, well-spaced tables with comfortable chairs.

All the dishes were excellent, and, for me, the scallop tartare starter and custard tart dessert were exceptional.  The taste combinations in each of the dishes were very good and the presentation was outstanding.  There is a huge amount of detail in each of the dishes.  Its obvious that the chef is striving for perfection.  Overall, the Seasonal Inspiration menu is well balanced, and the wine pairing was well thought through with all the wine selections working well with the food.

The Restaurant Manager, Ali Rasouli Nia, and his staff were excellent.  The waiters were friendly and very knowledgeable, and took their time explaining each of the dishes to us.  The service was outstanding, as you would expect, and we were not rushed even though we were the last lunch time sitting.  I was given a short tour of the kitchen after we had finished eating.  The kitchens have been extended and totally refurbished since my last visit.

Overall, this was an exceptional, memorable lunch.  Although it was expensive, it was worth every penny.  Here, the food and service live up to their three-star expectation.  I will definitely be returning.

Chef de Cuisine – Matt Abé grew up in Sydney, Australia and spent four and a half years working at Sydney restaurant Aria under Matt Moran.  From there he moved to Melbourne and worked for Shannon Bennett at Vue de Monde as a chef de partie for two years.

In 2003 he moved to the UK as chef de partie and then sous chef at Gordon Ramsay Restaurants at Claridge’s (1 Michelin star) and was there for two and a half years.  Then he moved to Restaurant Gordon Ramsay in 2009, working for Clare Smyth, starting as a chef de partie and then after four years he was promoted to chef de cuisine and runs the kitchen.

The restaurant seats 45 customers.  In September 2006 a £1.5 million refurbishment was completed.  The interior was designed by Fabled Studio.

In 2007, Clare Smyth MBE, was appointed to the position of Chef Patron, becoming the only female chef in the UK to hold a three Michelin star accolade.

In 2015, Matt Abé was appointed Chef de Cuisine and now leads the team.

We chose to have the wine pairing to accompany the Seasonal Inspiration menu:

The scallop tartare was accompanied by a Castello Langhe Arneis Montebertotto 2018 from Langhe, Italy.  This North Italian white wine scores 3.9/5 on Vivino.  The Arneis grape provides a citrus and grapefruit note, with hints of peach, apricot and melon.  It is quite flinty and an excellent pairing with the scallops:

The organic spelt course was accompanied by a Louis Cheze Pagus Luminis Condrieu 2017.  This French white wine scores 4.3/5 on Vivino and is rated among the top 1% of all wines in the world.  There are apricot and peach notes, with some tropical fruit.  It is a full-bodied Viognier and is quite minerally in the aftertaste:

The smoked eel was accompanied by an excellent Domaine Jean-Michel Gaunoux Meursault Perrieres Premier Cru 2011.  This scores only a 3.9/5 on Vivino.  It is an excellent Burgundy Cote de Beaune white that accompanied the smokey eel flavour perfectly.  The Chardonnay grape gives a butter, oaky note, with minerals, honey and salt.  It has great minerality:

The grouse was accompanied by a Camille Giroud Corton Grand Cru ‘Le Rognet Corton’ 2011.  This is an excellent red Burgundy wine that scores 4.3/5 on Vivino.  The Pinot Noir grapes give raspberry and strawberry notes with oak, tobacco and black jerry, perfect with the gamey grouse taste:

The turbot was accompanied by a Miles Mossop Saskia 2015 white wine from Stellenbosch, South Africa.  It scores 4.1/5 on Vivino.  It is a mix of 73% Chenin Blanc, 18% Viognier, and 9% Clairette grapes, with a golden colour and jasmine, peach, citrus and toasted brioche aromas:

The desserts were accompanied by a Johanneshof Reinisch Eiswein 2017 from Thermenregion, Austria.  It scores 4.0/5 on Vivino. This is an excellent red, high viscosity, Merlot eiswein, with fabulous black cherries and ripe strawberry notes, and excellent acidity.  The sweetness is not overpowering.  It worked very well with the custard tart and the Tarte Tatin: