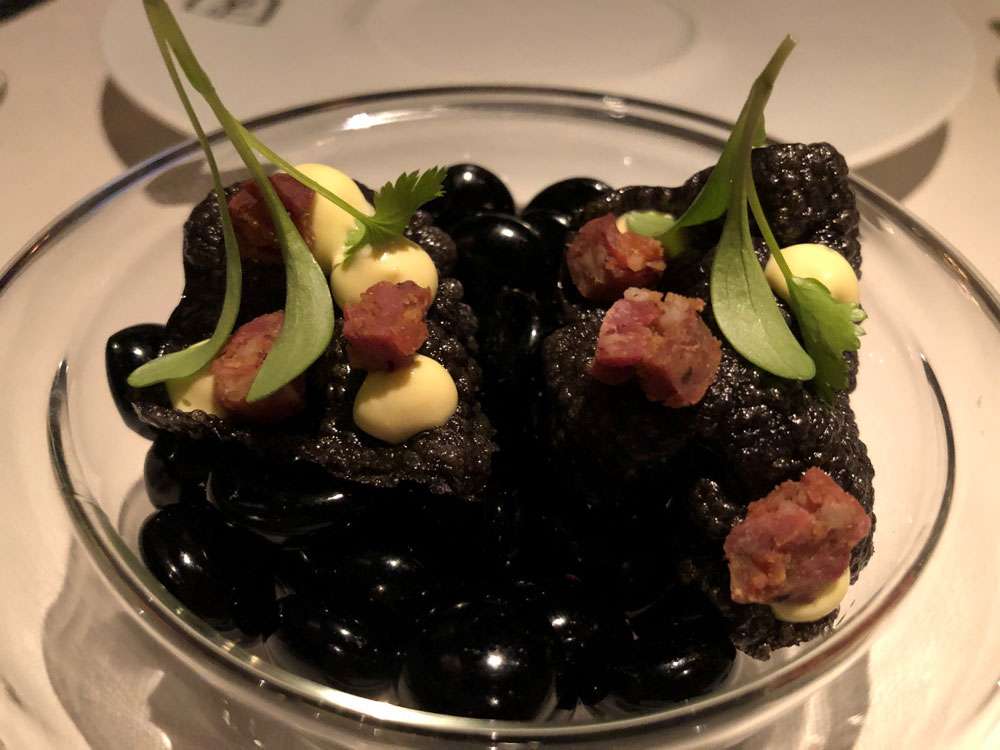 Sadly, Andrew lost his long battle with his brain tumor in January 2019 and the restaurant, that still proudly bears his name, is run by Head Chef Stephen McLaughlin who has retained the 2 Michelin Star rating.

The restaurant leases a 2-acres walled Victorian-style kitchen garden, some 10 miles away from the hotel, and now also benefits from the newly built herb garden situated to the rear of the hotel.

The restaurant has a close connection with Champagne Krug.  It is one of ten restaurants in the UK to be selected to hold a full allocation of six bottles of the new vintage and has the second largest consumption level of Krug in the UK.  One of my standout dishes, was the signature tasting dish of smoked lobster that is paired with Krug Grand Cuvee.  This dish is created by removing the meat from the lobster shells, cold smoking it over whisky casks, and placing it back in the shells, before baking it at a high temperature with butter, herbs and lime juice.  Simply amazing!

All the dishes were very well executed and packed with flavour.  Other standout dishes were the King scallop with a fricassee of sea vegetables, honey, and homemade dashi, and there was a memorable roast lamb with slow braised lamb shoulder.

The matching wine selections worked well with the food.  The Krug and lobster match were stunning.

The staff were very friendly and attentive.  The overall level of service was extremely high.

Andrew Fairlie (21 November 1963 – 22 January 2019) won the inaugural Roux Scholarship in 1984 and this enables him to complete a stage with Michel Guérard at Les Pres d’Eugenie, an experience he treasured for the rest of his life.  Andrew often spoke of how the Roux Scholarship changed his life, here he described the experience on the 21st anniversary of the competition in 2005:

“When I was encouraged by my chef Keith Podmore to enter this new competition that the Roux brothers had started back in 1984, I had no idea the huge influence the scholarship would have on my career and life.

I had applied, unsuccessfully for a commis position in a number of kitchens in France. At that time, it was unheard of for a British chef to gain entry into a 3-star Michelin in France, so winning the scholarship at the age of 20 was both terrifying and exciting. Now 21 years on it makes me immensely proud to see how the scholarship has evolved into THE most influential, worthwhile and most sought after culinary prize in Britain today. But it’s not just about winning a competition, it’s about joining a very elite chefs club and taking on the responsibility of being a Roux Scholar. I can honestly say that I would not have been as successful if I had not won the scholarship and all the support it has given me over the years.

It was a great honor after the 21st anniversary to be invited to join the judging panel of the scholarship, the fact that I was replacing Victor Ceserani who was a judge when I won the scholarship made it all the more special. When I look at the quality of the past and present judges, not to mention the list of previous winners it’s not a role that I take lightly.”

Following spells working on the Royal Scotsman cruise and the Disneyland Hotel in Paris, Andrew joined One Devonshire Gardens, Glasgow, in his first head chef role in 1994, and earned his first Michelin star in 1996.

He then set up his first restaurant, the self-titled Restaurant Andrew Fairlie at the Gleneagles Hotel, in 2001.  Both his head chef Stevie McLaughlin and general manager Dale Dewsbury came with Fairlie when he transitioned from One Devonshire Gardens to Restaurant Andrew Fairlie.  A year after opening, the restaurant was awarded a Michelin star.  A second star was added in 2006.

In 2002, Hotels magazine voted Restaurant Andrew Fairlie one of the world’s top ten hotel restaurants.  In the same year he became the inaugural Scottish Chef of the Year.  During the G8 Summit 2005 he cooked for the Queen and 44 of the world’s leaders.  In 2006, he was AA Chef’s Chef of the Year.  He was named a Relais & Chateaux Grand Chef du Monde in 2011, one of just seven in the UK.  In 2012 Restaurant Andrew Fairlie topped the Sunday Times Food List of the top 100 UK restaurants.

Andrew lost his battle against cancer and sadly died aged 55.  He is credited with leading the transformation of Scotland’s culinary scene and inspiring a generation of chefs to follow in his footsteps.

Head Chef – Stephen McLaughlin started as Commis Chef at One Devonshire Gardens in 1993, rising through the ranks to junior Sous Chef.  He left when with Andrew to set up Restaurant Andrew Fairlie in 2001.  Maintaining the extremely high standards of cuisine at Andrew Fairlie, he has also retained the 2 Michelin stars.

The restaurant is the proud owner of a duck press, similar to that at The Ritz, London, and The Waterside Inn.  Sadly, it isn’t in use: The selection of Armagnacs and Cognacs: To accompany the introductory snacks, we started with a glass of Larmandier-Bernier, Latitude Champagne NV.  This Blanc de Blanc (which means it is made from 100% Chardonnay grapes) scores 4.1 / 5 on Vivino.  This very impressive champagne has minerals, lemon, apple, brioche, with soft bubbles.  A perfect start: To accompany the poached crab claw, razor clam, cauliflower, grapefruit and Oscietra caviar, we were served a Domaine Zind Humbrecht, Muscat Alsace Grand Cru Goldert, 2015, from Alsace, France.  This scores 3.9 / 5 on Vivino.  There is some minerality, and its slightly off dry.  There are lemons and grapefruit on the nose: To accompany the chicken terrine and the foie gras we were served a Charles Hours, Uroulat Jurancon, 2015, from Jurancon, France.  This scores 4.0 / 5 on Vivino.  This is a light gold colour, sweet wine made from the Petit Manseng grape.  There are aromas of honey and exotic fruits, and a long, silky finish. To accompany the King scallop, fricassee of sea vegetables, honey, and homemade dashi, we were served a Coto de Gomariz (Maria Alvarez Serrano), Dende o Seculo X, 2015, from Ribeiro, Spain.  This white wine is made from the Trajadura grape and scores 3.8 / 5 on Vivino.  There is stone fruit, hay and some limestone notes on the nose, and a long, smoky, minerally finish To accompany the cep and truffle ravioli, preserved black truffle and white bean velouté we were served an Au Bon Climat, Chardonnay Santa Maria Valley, 2016, from Santa Maria Valley USA.  This scores 3.9 / 5 on Vivino.  This Californian 100% Chardonnay white wine has lemon, peach, and tropical fruits on the nose, and great oak flavours: To accompany the smoked lobster, we were served a Krug, Grande Cuvee Brut Champagne NV.  This superb champagne scores 4.6 / 5 on Vivino.  There are great fruity, floral and yeasty flavours.  Brioche, toasted almonds, caramelised peaches are all there.  A perfect Pinot Noir champagne to accompany a sensational dish: To accompany the lamb, we were served a Domaine Les Pallieres, Gigondas Terasse du Diable, 2014, from Gigondas, France.  This Southern Rhone red wine scores 3.9 / 5 on Vivino.  It has red flowers, raspberry, pepper and herbs on the nose, and cherry and raspberry on the palate.  It is made from 90% Grenache, 5% Mourvedre and 5% Clairette grapes, perfect with lamb, beef and game, and has low tannins: The Hennessy Paradis to accompany the coffee.  The blend was first created in 1979, and named for the Hennessy Founder’s Cellar, where only the finest, rarest and oldest eaux-de-vie are kept.  It is a superb cognac of remarkable depth and elegance, made from 100 eaux-de-vie that have been aged for up to 130 years.