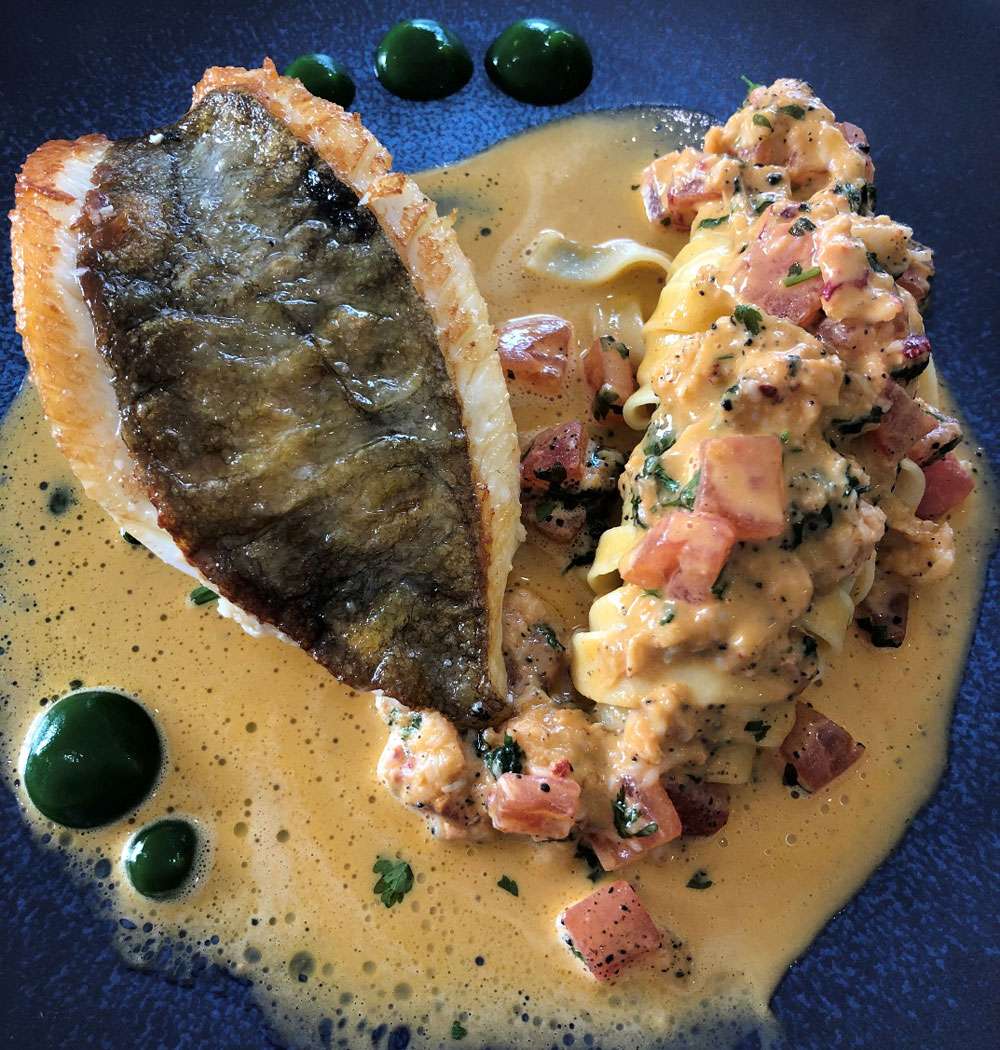 The Atlantic Hotel’s Ocean Restaurant is one of the top gourmet destinations in Jersey.  The hotel itself is situated adjacent to a golf course with sweeping views down to the sea.  The restaurant is light and airy, with comfortable chairs and large, well-spaced tables.  The food, cooked by Will Holland and his brigade is outstanding.  The menus are well designed and feature lots of courses that I want to return and try.  We both enjoyed the same starter and main course and they were tremendous.  The service is impeccable.

This is a destination you must go to when you visit Jersey.  It is well worth the visit.

His next job was at Gravetye Manor, where he worked for five years under Mark Raffin.

He joined Alan Murchison’s L’Ortolan in Reading in 2004, initially as sous chef, but was promoted to head chef within months and ran his kitchen there for three years.  He then became head chef at Murchison’s sister restaurant La Bécasse in 2007.

Will earned his first Michelin star at La Bécasse two years after joining and before his thirtieth birthday.  He also earned three AA rosettes and the Good Food Guide named him one of the ten most influential chefs of the decade.

In 2014, he opened his own restaurant Coast in Pembrokeshire in a purpose-built venue.  Coast was received with wide acclaim, including being named ‘AA Restaurant of the Year for Wales 2015-2016’.  Will was named UK Restaurant Chef of the Year 2016 by The Craft Guild of Chefs.

Will joined The Atlantic Hotel as Executive Chef in October 2017 replacing Mark Jordan.  The Ocean restaurant lost its 1 Michelin Star that it had held since 2007 when Mark left.

The Atlantic Hotel is family owned and celebrating its 49th anniversary.  It is a member of Small Luxury Hotels of the World, situated in extensive grounds adjoining La Moye golf course and enjoys dramatic views over St Ouen’s.

We enjoyed lunch in the Ocean Restaurant, but the hotel has also developed a new concept called the “Tasting Room” with a seven-course gourmet menu which Will describes as ‘a modern adventure in food and wine’.  The dishes served are gastronomic in nature and unique to this dining room, offering a celebration of the very best local ingredients and finest Jersey produce.  Head Sommelier Benjamin Smith has also chosen a bespoke drinks selection to go with each course.  There are only five tables, and it is open for dinner Tuesday through to Saturday.

Fabulous views from the restaurant:

Inside the restaurant blues, whites and beiges create a modern classic look.  There are large tables and comfortable chairs.  The hand-crafted furniture and specially commissioned artwork emphasise the feeling of luxury.  White shutters frame stunning views over the gardens to the ocean beyond:

The restaurant is light and comfortable: