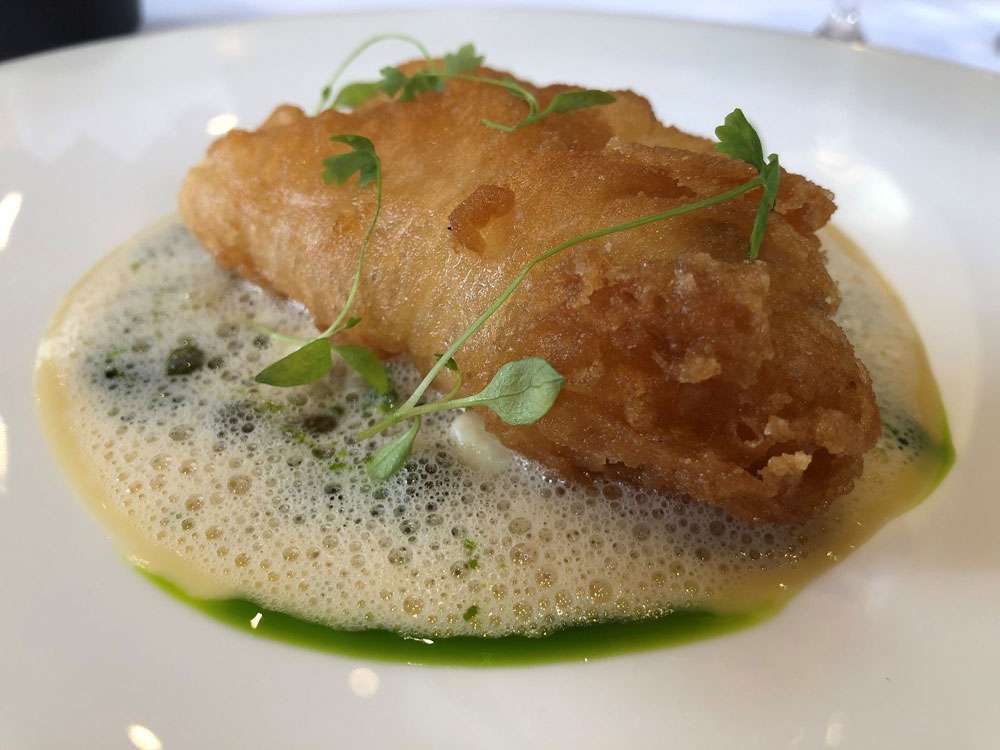 I last visited Northcote for dinner about five years ago and found the food and service to be very good.  Its now moved up a gear.  The food is fabulous.  The service is outstanding.  This is a restaurant striving for a second star, and I think they are going to get it.

The food is innovative and perfectly cooked, often showcasing local produce.  Chef Lisa Goodwin-Allen is putting her heart and soul into this, and it shows.  The wine pairing was unusual, with many wines I had not tried before, but they all worked well and enhanced the food.

The service was top drawer.  All the waiters knew the details of the ingredients in each of the courses, and they were enthusiastic and friendly.  The sommelier had an encyclopaedic knowledge of the wines he was serving and took time to explain the nuances of each selection.  The very high service quality was what you would expect from a Michelin starred restaurant.

The accommodation is excellent at Northcote.  If you are visiting, I would recommend you investigate the very good value room and dining deals that are available.

This was a great gastronomic experience, and definitely worth the money.  I will be returning again…soon!!

After a year in Cheltenham, Lisa joined Northcote working for Nigel Haworth as a demi chef de partie in 2001.  After a year she was promoted to chef de partie.  Then, in 2003, she became a junior sous chef and was again promoted to sous chef after a year.  In 2004, Lisa was named head chef of the restaurant and placed in overall charge of the kitchen.  In 2015 she became Executive chef.

When Nigel Haworth stepped back to take up an ambassadorial role in October 2017, Lisa took over and in 2018 she successfully retained the Michelin star at Northcote that had been held by Nigel since 1996.

Lisa was a finalist for the Roux Scholarship in 2006.  In 2008 she was named Chef of the Year by the Northern Hospitality Awards.  Lisa also competed in the fifth season of the BBC cooking show Great British Menu in 2010, in the north-west section of the competition and won the round to go through to the final.  Lisa won and became one of four chefs to cook at a banquet hosted by Prince Charles.  Her winning dish was a rabbit and leek turnover with piccalilli.  In 2011, she was named Restaurant Chef of the Year by the Craft Guild of Chefs.  Lisa also appeared in series 8, episode 18 of MasterChef: The Professionals as a chef mentor for the semi-finalists.

The Gastronome meets the chef:

He worked as a chef at 2-Michelin star Hotel Plaza Athénée, Paris, and has worked in a number of prestigious properties including Browns Hotel, The Westbury and Grosvenor House, alongside some more commercial experience at The Strand Palace, Regent Palace and The Cumberland.

He joined Northcote as General Manager in 1983 and has focused on creating this oasis of food and wine excellence with exceptional service.

The Northcote list includes 52 Champagnes and Sparkling Wines and 500 Bins of still wines from 20 different countries, ranging from £26 through to £800.  In 2016 and 2017, their hard work was recognised when Northcote won the Best of Award of Excellence in the 2016 Wine Spectator’s Restaurant Awards for an outstanding wine list.  This extremely prestigious award has only been granted to 11 English restaurants.

The Iberico pork Milanese starter on the lunch menu was accompanied by a Michael and Stephane Ogier, Viognier de Rosine, 2016, from Collines Rhodaniennes, France.  This excellent Northern Rhone white wine scores 3.9 / 5 on Vivino and has been awarded 88 / 100 by Robert Parker.  There are apricot, peach and pear notes on the palate, with slight citrus aroma, ideal with the pork:

The beer battered turbot main course on the lunch menu was accompanied by a white Petritis, 2018, from Kyperounda winery in Lemesos, Cyprus.  This scores a 3.8 / 5 on Vivino.  This dry white wine, made from the Xynisteri grape, is partially aged in wood.  It has melon, honey and peach on the palate and is minerally and crisp:

The chilled Isle of White tomatoes starter on the 6-course tasting menu was accompanied by an excellent Dr Loosen, Riesling Kabinett, Wehlener Sonnenuhr, 2017, from Berkastel, Mosel, Germany.  This Riesling scores a 3.9 / 5 on Vivino.  It has apple and peach on the palate, with some honey and minerals.  There is a slight fizz and it is nicely off-dry with high acidity:

The day boat turbot on the 6-course tasting menu was accompanied by a Wildeberg, Franschhoek, South Africa, 2018.  This excellent white wine scores a 4.5 / 5 on Vivino.  It is a Semillon with grassy and floral notes that worked very well with the fish:

The Iberico pork on the 6-course tasting menu was accompanied by a Lawson’s Dry Hills, Pinot Noir, Reserve, Marlborough, New Zealand, 2015.  This light red wine scores a 4.1 / 5 on Vivino.  There is cherry and raspberry on the palate, with some oak and vanilla:

The wild sea bass on the 6-course tasting menu was accompanied by a Josmeyer, Mise du Printemps Le Pinot Blanc, from Alsace, France, 2017.  This Alsace Pinot Blanc scores 3.9 / 5 on Vivino.  There is apple, peach and pear on the palette, with honey and some minerality.  It is slightly off-dry but this is balanced well with the acidity:

The Herdwick lamb on the 6-course taster menu was accompanied by an Orgo, Separevi, Old Vines, from Kakheti, Georgia, 2018.  This velvety, dark red wine scores 4.1 / 5 on Vivino.  There is cherry and raspberries on the nose:

The English strawberries on the 6-course taster menu was accompanied by a Moscato, Innocent Bystander, from Victoria, Yarra Valley, Australia, 2017.  This scores 4.2 / 5 on Vivino.  It has a salmon colour with apricot, blackcurrant and strawberry on the palate.  There is a nice fizz.  This is an outstanding wine for the price: