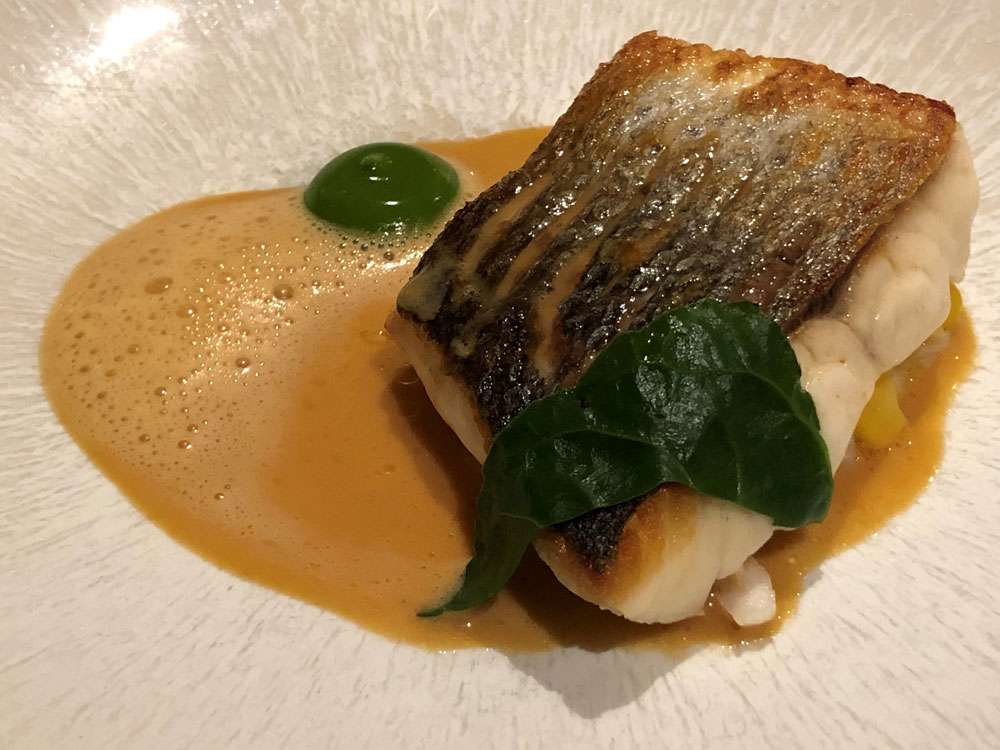 It holds four AA red stars and four AA rosettes, as well as a Michelin star for a remarkable 21 consecutive years.

Many of you will know Morston Hall’s chef patron Galton Blackiston from his regular appearances on James Martin’s Saturday Morning TV show.  He has showcased some great cooking on the programme, such as his Luxury Fish Pie, and English Breakfast, although James has managed to cremate a very interesting pizza that Galton created.

The food and service at Morston Hall are remarkably good, and Galton and his team are justifiably proud of their high standards and hugely impressive, long-standing Michelin star record.

We started our dinner with some canapes consisting of an excellent merguez pastilla with garlic aioli, tuna with avocado and coriander, and a hasselback potato with black truffle.

These were followed by a very good cannellini bean velouté with caramelised onions and Morteau sausage.  The beans and sausage are a great combination and set us up for the next courses.

Next, we were served the Anjou pigeon, with new season kabocha squash, black trompette mushrooms (trompette de la mort), and crispy potato.  This was accompanied by our first paired wine which was a Fratelli, Antonio e Raimondo, Barbera d’Alba 2019 red wine from Italy.  The cooking of the pigeon was well judged, moist but not undercooked.  The red wine matched the food very well, as did all the wines in the flight.

Next, was an excellent fillet of wild sea bass.  This had been caught off the coast of Lowestoft, cooked on the plancha griddle, and served on fresh Cromer crab and sweetcorn, with a lovage emulsion, a shellfish bisque, and sea beets.  This was paired with a Gabrielskloof, Magdalena, Semillon 2018 white wine from South Africa

The assiette of Richard Vaughan’s Middle Wight suckling pig was a standout dish for me.  This included pork loin wrapped in pancetta, leg meat and cheek topped with whole grain mustard, a turnip top, with baby turnip, crispy sage and a well-made Sauce Robert (a brown mustard sauce made with onions, mustard, and white wine simmered in a basic demi-glace).  This was paired with an unusual but excellent Kozlovic, Teran 2018 red wine from Croatia.

The pre-dessert was puffed wild rice, with a good lemon thyme ice cream and local Cromer honey.  The dessert was an excellent Brillat-Savarin and passion fruit cheesecake with coconut sorbet and an exotic fruit compote (Brillat-Savarin is a soft-ripened triple cream cow’s milk cheese from Burgundy).  This was matched with a very nice, light Yealands Estate, Noble Riesling 2019 dessert wine from New Zealand.

Cheese was available from a well-stocked cheese trolley at a supplement of £17.50 per head.  Unfortunately, I was too full to order cheese!

Finally, we were given some very good Morston Hall chocolates.

The 7-course tasting menu changes daily.  It costs £105 per person and the wine pairing is available at £70 per head.

The food and service at Morston Hall are of an exceptional standard.  Although I haven’t stayed overnight in one of the rooms, they look very well appointed, and I’m sure the breakfast would be superb.  This is a restaurant that I highly recommend and will be returning to.

Chef-Patron Galton Blackiston had planned on pursuing a career as a professional cricketer.  By the time he was 17 he ran a stall selling homemade cakes, biscuits and preserves at a local market and the range of ‘Galton’s Goodies’ were so successful he realised that his talents lay in cooking, so he decided to focus on a career as a chef.

With no formal training, his first job was with one of the original celebrity chefs, John Tovey, at Miller Howe Hotel, overlooking Lake Windermere.  This might have been a spur of the moment decision as Galton’s parents were on holiday at the Miller Howe when there was a vacant position in the kitchen.  However, Galton spent four years working in the pastry section, and eventually become head chef.

Galton then worked at restaurants in London, New York, South Africa and Canada, before he and his wife, Tracy, found Morston Hall on the North Norfolk coast.  At that time, it was a country house with only 4 rooms and a 20-cover restaurant. Galton and Tracy have transformed Morston Hall into a beautiful 13-room hotel and, in 1999, the restaurant was awarded a Michelin star, which has been retained ever since.

In the 2006, Series 1, of Great British Menu, Galton represented the Midlands and East of England, knocking out celebrity chef Antony Worrall Thompson to gain a place in the final.

Some of Morston Hall’s many awards: