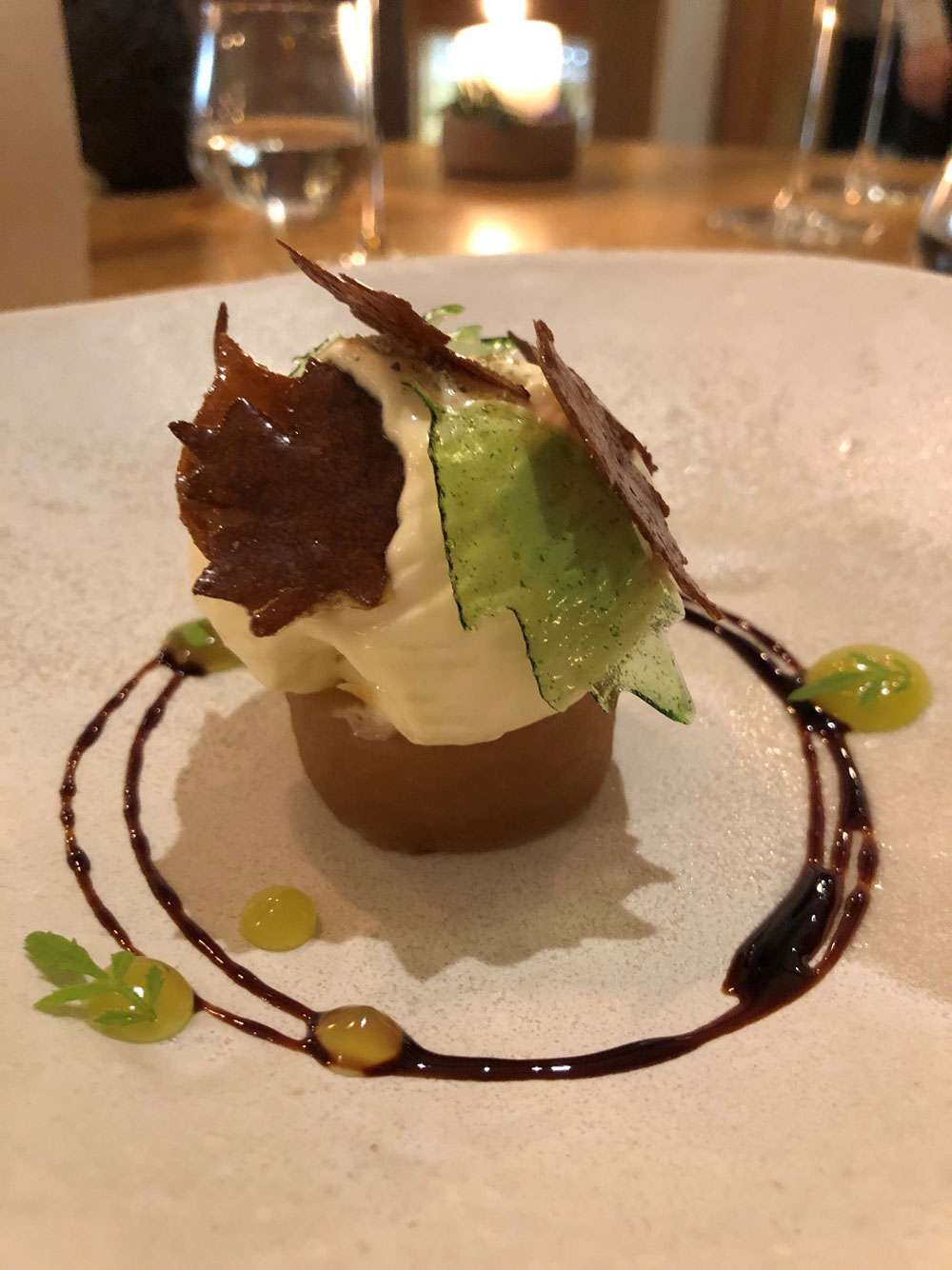 Moor Hall is an impressive restaurant in a Grade II listed country house in Aughton, Lancashire.  It has 7 bedrooms, a kitchen garden with raised beds and glass houses, an impressive cheese room and a wine cellar to store the 350-bin wine list in.  A second dining area, The Barn, is a more casual restaurant that serves lunch and dinner.

We chose the 8-course tasting menu at £155 per head with the matching wines at £95 per head.  We booked an Escape Package, that includes dinner and an overnight stay.  There are 7 rooms available, 5 are located in the main Hall with a further 2 in the gatehouse by the lake.  Our room was large, with exposed beams, a great view of the grounds, an excellent bed, well sized bathroom with bath and a walk-in shower.  The standard of the room was very high.

Dinner started in the adjoining bar where drinks were served along with homemade charcuterie and other excellent and original snacks.  We were then led into the dining room and visited the open kitchen where we eat our final snack, smoked eel, potato, fermented garlic, and flowers, while standing at the pass.  This was an excellent introduction and very memorable.

The 50-cover dining room is spacious with high ceilings and well-spaced tables.  It has views into the open kitchen on one side and the grounds and lake on the other.

The standard of the food was exceptionally high.  Mistakenly, I expected the food at Moor Hall to have similarities to L’Enclume, because of Mark’s history there.  I eat at L’Enclume the night following my dinner at Moor Hall, and I was wrong.  Mark’s food has its own distinct style.  Highlights for me were the beef tartare, which was the best I have ever tasted, the turbot and the superb venison.  There were no courses I didn’t enjoy.  The food was original, packed with flavour and had interesting texture combinations.  Foraging and home-grown vegetables were clearly big influences.  There were lots of interesting herbs used and a small booklet introduced the more unusual varieties.

The wine selections were very good, and all worked well with the food.  The cheese room is extraordinary, and I would advise a visit even if you can’t make space for an extra cheese course.  I’m sure you will change your mind as soon as you are in the room!

The standard of service was very good.  The waiters were friendly and extremely knowledgeable.  The pace at which the courses were served was well judged.

Moor Hall is a relatively new gastronomic destination and Mark Birchall is clearly one of our top chefs.  This was a superb restaurant experience and I highly recommend a visit. Mark Birchall – trained at Runshaw College, working at a placement at The Pines in Chorley.  He then moved to the then Michelin starred The Walnut Tree in Wales working for Head Chef Franco Taruschio.  Then after some time at Northcote working for Nigel Haworth, he gained his first head chef role at Haighton Manor in Lancashire in 2004.

He then joined Simon Rogan as Sous Chef at L’Enclume in 2006 which at that time had 1 Michelin Star and 4 AA Rosettes.  He eventually worked his way to Head Chef.

He won the Roux Scholarship in 2011 and spent a further two years as Rogan’s group executive chef.  The prize for winning the Roux Scholarship was a stage at El Celler de Can Roca, Girona, a 3 Michelin Star Restaurant owned by the Roca Brothers, twice voted the world’s best restaurant.

He left L’Enclume in the summer of 2015, to open his own restaurant.  He opened Moorhall in 2017 with business partners Andy and Tracey Bell, and was awarded a Michelin star within six months of opening.  This was followed by a second star in 2019.

As well as a second Michelin star, Moor Hall also received four AA Rosettes in the AA Restaurant Guide 2019.  It was awarded a further rosette the following year, giving it the full five rosettes.  It was awarded Best Breakthrough at the GQ Food & Drink Awards 2018.

Minimus, Vitae Springs Vineyard, Gruner Veltliner, 1980 from Willamette Valley, USA.  This scores 3.6 / 5 on Vivino.  This is an “earthy” wine, with cocoa and coffee.  It was served with the raw langoustine, with radish, nasturtium, and marigold: Ktima Gerovassiliou, Malagousia Single Vineyard, 2019, from Epanomi, Greece.  This scores 4.4 / 5 on Vivino.  It has peach and melon on the nose and citrus and subtle tropical fruit on the palate.  It was served with the oyster course: Pierre Frick, Pinot Gris, 2014, from Alsace, France.  This scores 3.7 / 5 on Vivino.  This is a bio-dynamic wine with zero sulphites, plenty of acidity and hints of peaches and pineapple.  It was served with the baked carrots: Equipo Navazos, Niepoort Blanco, 2016, from Andalucia, Spain.  This scores 3.8 / 5 on Vivino.  Made from the Palomino grape, it is a “sherried” white wine, slightly nutty, dry and oaky, with honey and stone on the palate.  It was served with the turnip and crab with anise hyssop and sunflower seeds: COS, Nero di Lupo, 2018, from Terre, Sicily.  This is a Southern Italian red wine made from Nero d’Avola grapes, scoring 3.6 / 5 on Vivino.  It has a medium ruby colour, with red cherries and a light touch of tobacco on the nose, and blackberry and cherry on the palate.  It was served with the superb Holstein Friesian tartare, barbecued celeriac, mustard and shallot: Stolpman Vineyards, Roussanne, 2017, from Ballard Canyon, USA.  This white wine made from the Roussanne grape, scores 3.8 / 5 on Vivino.  On the nose there is flint, vanilla, peach and melon, with toast, peach and honey on the palate.  It was served with the grilled scallop with cauliflower, truffle and fermented grains: Filipa Pato, Nossa Calcario, 2018, from Bairrada, Portugal.  This red wine scores 4.0 / 5 on Vivino.  This Northern Portuguese wine I made from the Baga grape.  It is light but slightly spicy, fragrant, with cherry and blueberries.  It has a light body and fine tannins.  It was served with the turbot cooked on the bone, mussels, artichoke and roe: Newton Johnson, Family Vineyards, Granum, 2016, from Hemel-en-Aarde Valley, South Africa.  This Western Cape red wine is made from Shiraz and Mouvedre grapes.  It scores 4.4 / 5 on Vivino.  There is ripe black fruit, tobacco and warm spice, with a “grainy” tannin and medium body.  It was served with the Aynhoe Park fallow deer, with beetroot, kale and elderberry: Domaine Rotier, Renaissance Vendanges Tardives, 2015, from Gaillac, France.  This dessert wine is made from the Loin de l’Oeil grape and scores 4.2 / 5 on Vivino.  It has a scent of oranges, and dried apricot, with marzipan, marmalade and honey on the palate.  There is good acidity, so it is not overly sweet.  It was served with the cheese: Quinta do Vale Meao, Vintage Port, 2007.  This scores 4.6 / 5 on Vivino.  It has cherries, red berries, currants, spices, chocolate and some vanilla.  This is a great port!!  It was served with the cheese: Hertszolo, Tokaj, Late Harvest, from Tokaj, Hungary.  This bio-dynamic dessert wine scores 3.6 / 5 on Vivino and was the Bronze Medal winner in the 2017 International Wine Challenge.  It has a floral, peach and apricot nose, with some pear and yeast on the palate.  It was not overly sweet.  It was served with the rhubarb dessert: Domaine du Petit Metris, Coteaux du Layon “Saint-Aubin”, 2014, from Coteaux du Layon, France.  This Loire Chenin Blanc dessert wine scores 4.1 / 5 on Vivino.  It is not too sweet but has high acidity with notes of flowers, honey and straw.   It was served with the green apple dessert: