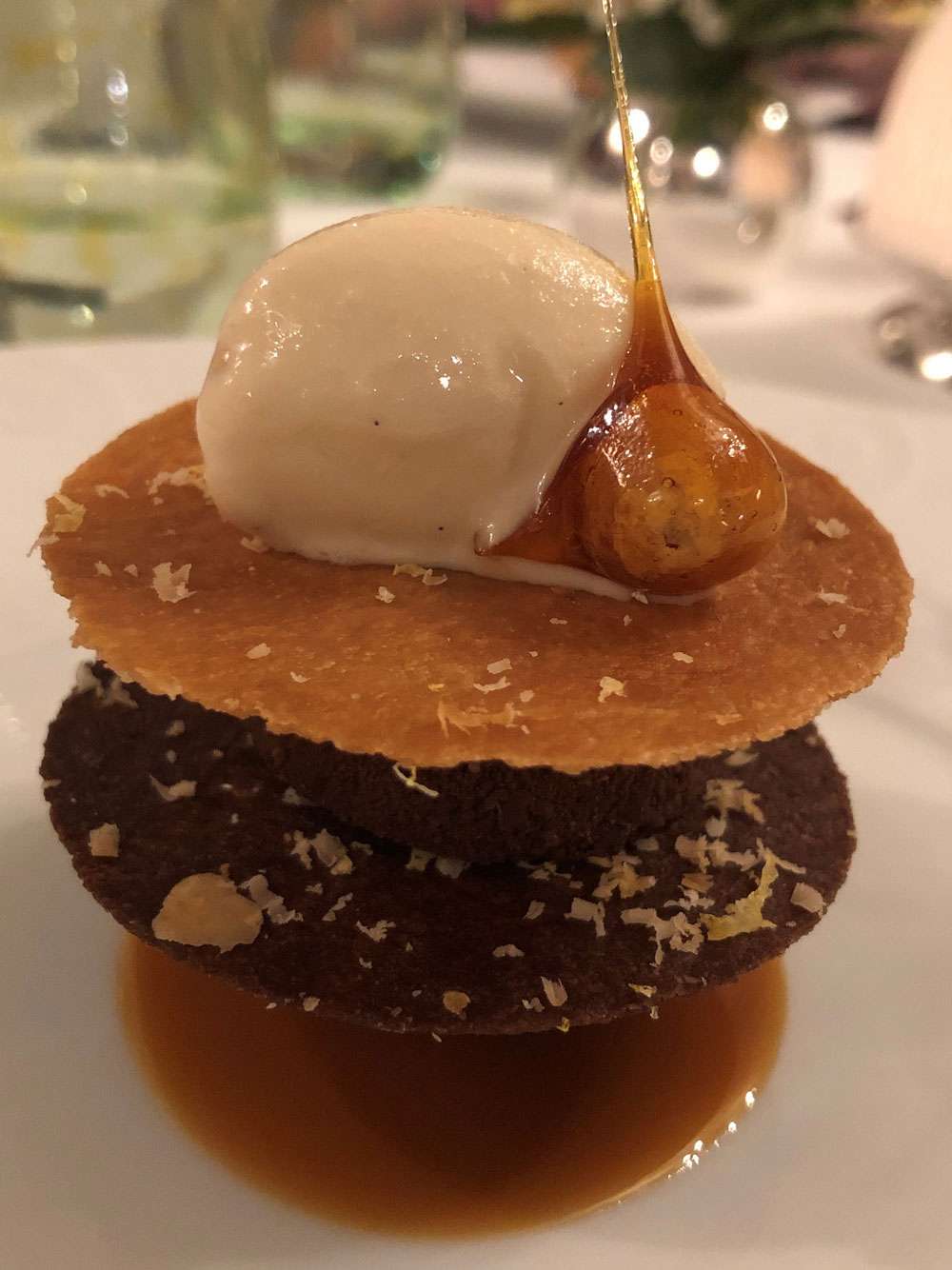 You approach Midsummer House walking over a bridge that spans the River Cam, or walking across a Common, past grazing cattle.  I didn’t see any cows, but I’m assured they are there.  The restaurant is on the riverbank next to a large weeping willow.  It’s a picturesque setting and only a few minutes from the centre of Cambridge.

Midsummer House was awarded its first Michelin star in 2002, followed by a second in 2005, which have been retained ever since.  The restaurant also proudly holds five AA rosettes.  This is definitely one of the top restaurants in the UK.  The food is delicious, ingenious, and presented beautifully.  The service is top drawer.  My experience at the restaurant was exciting and memorable.

We started with a glass of Krug champagne and some very impressive and inventive amuse bouche.  A “cheese on toast” presented in the form of a honey glazed egg that was delicious, an Italian tartlet with Iberico ham and parmesan, an IPA glazed chicken wing, and a wonderful trio of small prawn dishes that included a consommé made from the prawns’ heads.

Next, we were served salt-baked beetroot with wild venison tartare.  The taste was excellent and the presentation ingenious.  It was served with different flavours of mustard and a horseradish tuile, together with a beetroot brioche loaf, and a mustard and beetroot juice dipping oil.

Then we were treated to the Midsummer signature dish of roasted Orkney scallop, with salt baked celeriac and Granny Smith apple.  This is one of the restaurant’s most popular dishes that has been on the menu since it opened.

The roasted Norfolk quail breast was served with a rillettes of the leg, duck liver, and a superb confit quail egg tartlet.  This was my standout dish of the evening.  The quail was cooked perfectly and served with a very good brown sauce.  We switched to an excellent South African Constantia red wine, recommended by the sommelier.  This was extremely light, and we enjoyed this with the remaining savoury dishes.

The confit fillet of Yorkshire beef was very tender.  It was served with tenderstem broccoli in an anchovy hollandaise, pickled anchovy, broccoli puree, and a beurre rouge sauce.

An excellent macaron was served next.  It had flavours of pear, Stinking Bishop cheese and gingerbread, and prepared us for the cheese course that followed.

The two-part cheese course included rich butter fried brioche fingers, that were filled with malted Baron Bigod cheese and topped with a duxelles layer of truffle, served together with a glass of yoghurt, with sweet marsala wine, mushroom honey, brioche foam and grated truffle.

The first dessert was poached English blackcurrants and a blackcurrant leaf sorbet, all covered in a light blanket of candy floss.

Then, the main dessert was a hazelnut chocolate mousse, with a hazelnut and almond praline, puff pastry wafers, and reduced milk and vanilla ice cream.  This was another standout dish.

Finally, the basket of Bottereaux was served with two dipping sauces of apple and vanilla custard.  These were the best doughnuts I have ever tasted, but I was full by this time and, regrettably, couldn’t eat them all.

We didn’t choose the wine pairing, but selected bottles from the extensive wine list, with some great suggestions from the very knowledgeable sommelier.

For a tasting menu, with amuse bouche, nine courses and sweet treats, the size of the courses is very generous.  So, I would advise you to be prepared for a substantial meal.

This was one of the best meals I have ever eaten.  It’s expensive, but worth every penny.  I highly recommend a visit.

The restaurant is open Wednesday to Saturday lunch and evening service. The Tasting Menu is priced at £230.00 per person and the Lunch Menu at £130, although prices will increase in November 2021.  There is no a la carte menu available.

Thanks to our great waiter Harry who was very patient when he explained the details of each of the courses to me. Midsummer House was awarded its first Michelin star in 2002 and a second in 2005 list.

Daniel has made it to the Great British Menu banquet on two occasions, winning in 2012 and 2013.  In 2012, his dish featured a slow-poached chicken, served with an artificial egg made from sweetcorn, as well as an accompaniment of buttered spinach, bacon and peas.  Then, in 2013, his winning dessert was a combination of pineapple cheesecake, coconut sorbet, pineapple textures and piña colada.

On 5 October 2015 Clifford was awarded the Chefs Chef of the Year at the AA awards held at the Grosvenor House Hotel. He was praised for turning Midsummer House into one of the country’s finest restaurants, while being an “inspiration to so many chefs at all levels”.

I can highly recommend Daniel’s book “Out of my Tree” which gives an honest and detailed account of his career, the ups and downs, with some of the fabulous recipes created for Midsummer.

Head Chef Mark Abbott trained under Michael Deane at his Michelin starred restaurant in Belfast.  He also worked at Andrew Fairlie’s Restaurant at Gleneagles, and Paul Kitching at 21212 in Edinburgh.  Mark did a couple of stages in London, Pied a Terre and Hibiscus.  He moved to Cambridge to work at Midsummer House in September of 2010, starting as a chef de partie, working up to becoming head chef in December 2014. The restaurant lit up at night: You can watch some of the action in the kitchen from the window in the restaurant: There is a wine pairing with eight wines available at a cost of £135 per person, and an extensive cellar that you can also choose from.  The sommelier is very helpful and knowledgeable.  We chose to select from the wine list instead of having the pairing.

The first wine was a Sebastien Treuillet Pouilly-Fume 2019.  This white wine from the Loire Valley scores 4.1 / 5 on Vivino.  This has some delicate tastes of citrus and apple, with great minerality that worked well with the early dishes on the menu. For the quail dish, we chose a red wine from Constantia, South Africa.  The Groot Constantia, Rood, 2018 is a blend of Shiraz, Cabernet Franc, Merlot and Pinotage, and scores 4.1 / 5 on Vivino.  It is a deep burgundy colour, with plum and dark fruits on the palate, with soft tannins. The dessert wine was a Black Canvas, Meta Riesling, 2018 from Marlborough, New Zealand.  This superb wine scores 4.2 / 5 on Vivino.  This light dessert wine has a palate of citrus, honey, and ripe apricots, and worked very well with the cheese and desserts we were served. Superb Bas Armagnac with coffee, a Marquis de Montesquiou, 1973.  The interesting bottle shape is a reflection of the Musketeers who used to each carry their gourd at the waist.