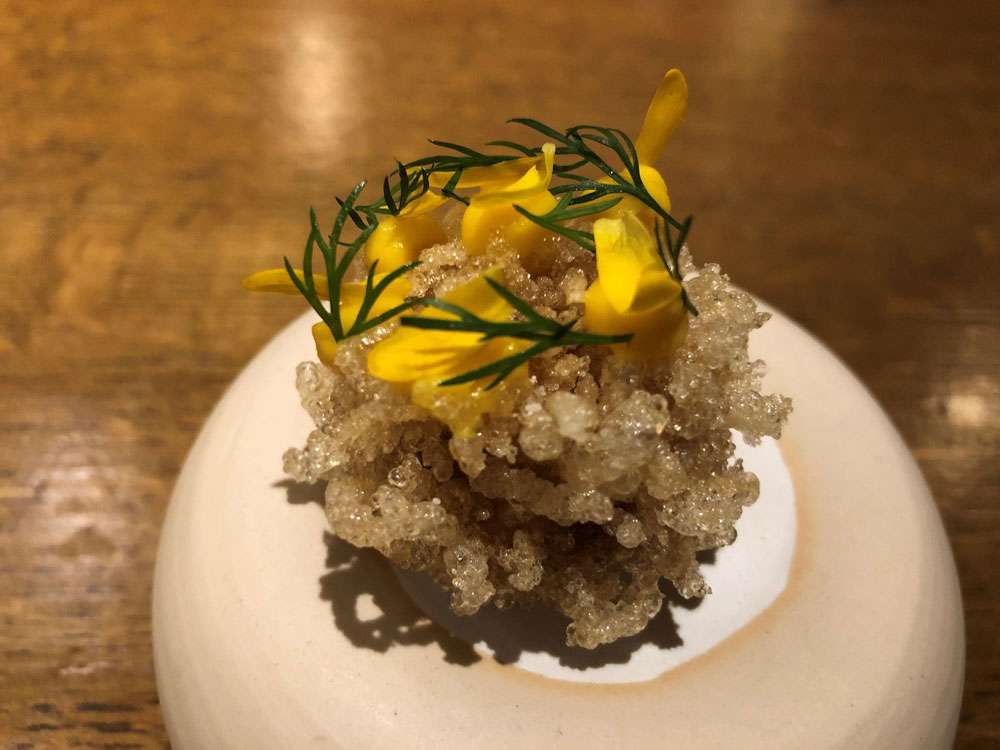 L’Enclume holds two Michelin stars, five AA Rosettes and was named the number one restaurant in the UK by The Good Food Guide 2020.

We booked a Cartmel Escape package that included dinner at L’Enclume, and a superior room at L’Enclume House which is situated next door to Rogan & Co (a 1 Michelin Star restaurant), where you take a very good breakfast the following morning.  The accommodation is approximately 300m from the L’Enclume restaurant, so be prepared for a short walk.

The food was outstanding and totally authentic.  My personal highlights were the superb pork and smoked eel fritter that cleverly combined salt/sweet/umami/fatty flavours all in a crispy textured mouthful, an outstanding turbot and mussels dish, and an excellent dry-aged duck.  All the dishes were perfectly cooked and beautifully presented.  The wines were carefully selected and worked well with each of the courses.  The service was very professional, and the staff friendly and knowledgeable.  This was a first-class dining experience and I highly recommend a visit.

If you do visit, one thing you should be careful of is the parking in Cartmel which is strictly controlled.  If you want to park near to the accommodation in a parking bay you can only stay for 1 hour before you have to move your car again (between 0800hrs up until 1800hrs when it becomes free).  Otherwise, parking is available at Cartmel racecourse, located 300 yards from L’Enclume House, where you can buy an overnight ticket.  There were several cars with parking tickets, so you will need to be wary. At the age of 17, following catering college, Simon started work as an apprentice at Rhinefield House Hotel in Hampshire.  Then in 1988 he took a position as a pastry chef at Geddes Restaurant in Southampton, under chef Jean-Christophe Novelli, working with him for the following 8 years.

During this time, he had stints working at The Maltster’s Arms in Devon (then owned by Keith Floyd), Gordleton Mill in the New Forest, Hampshire, and Nansidwell House Hotel in Falmouth, as well as stage placements under Marco Pierre White and John Burton-Race.

In the 1990s he worked for two years at the three-star Lucas Carton in Paris, under Alain Senderens.  This was followed by his first head chef role at Adlington Place in Croydon.

In 2002, Simon and his partner Penny Tapsell opened L’Enclume in Cartmel, Cumbria.  The restaurant is sited in an 800-year-old former smithy.  The name L’Enclume means ‘anvil’ and pays homage to the former blacksmith’s workshop it is located within.  His first Michelin star was awarded in 2005, with the second in 2013. He also currently holds the maximum five AA rosettes.

He opened a second restaurant in Cartmel, Rogan & Co, in 2008.  This is more informal that L’Enclume, and holds 1 Michelin star.  In 2013 he took over The French Restaurant at Manchester’s Midland Hotel, and in 2014 he starred in the BBC’s Restaurant Wars where he competed with Aiden Byrne as they both try to open fine dining restaurants.  Also, in 2014 he opened Fera at Claridges Hotel, London, which he operated for the following 3 years.

Simon is influenced by French chef Marc Veyrat, who specialises in molecular gastronomy and the use of mountain plants, herbs and flowers.  Simon has had huge success, and these are some of his outstanding accolades: Our aperitif was a Suenen, Oiry, Blanc de Blancs, Grand Cru “Cramant” Champagne.  This Chardonnay grape champagne scores a 4.1 / 5 on Vivino.  On the nose there is green apple and brioche, and there is great minerality and citrus on the palate.  This is a superb aperitif: Furmint, Dobogo, Tokaji, Hungary, 2016, served with the scallops.  This wine is made from Furmint grapes and scores a 3.8 / 5 on Vivino.  This crisp, dry white has apple and pear flavours on the palate and was a perfect match with the scallopes: Pino Noir Blend, Exton Park Vineyard, Brut, Hampshire, England, NV.  This was served with the Seaweed custard and razor clam.  This English sparkling is made from Chardonnay and Pinot Noir and scores 3.6 / 5 on Vivino.  It is dry with some acidity and a good mousse.  It has apple, citrus and minerality. There is also some toast and honey: Alvarinho, Anselmo Mendes, “Contacto”, Moncao e Melgaco, Portugal, 2018.  This was served with the Biodynamic young leeks.  This Vinho Verde white wine scores 3.8 / 5 on Vivino.  It has notes of peach, pear, lemon and there is some minerality: Garganega, Anselmi, “Capitel Croce”, Veneto, Italy, 2018.  This was served with the Cornish crab and potatoes in chicken fat.  This white wine is made from Garganega grapes and scores 3.9 / 5 on Vivino.  It has a straw colour in the glass, with peach and apricot on the nose.  It is rich and creamy, and there are peach, apples and grapefruit flavours on the palate: Sauvignon Blanc Blend, Man O’War, “Gravestone”, Waiheke Island, New Zealand, 2017.  This was served with the West coast turbot, mussels, broccoli.  This white wine made from Semillon and Sauvignon Blanc scores 3.6 / 5 on Vivino.  It’s not overpowering, its fresh and there are nice herbs and fennel notes.  Perfect pairing with the turbot and mussels: Virua, Moraza, “4 Caminos”, Rioja Alta, Rioja, Spain, 2018.  This was served with the Wilted Koto spinach with Valley honey, green juniper and sorrel.  It is a savoury short-maceration orange wine made from 100% white Viura grapes grown on 40-year-old vines at high altitude.  It only has a few days skin contact which gives the wine its delicate colour and light savoury aromas: Pinot Noir, Lethbridge, Geelong, Victoria, Australia, 2017.  This is served with the duck hearts and breast.  It scores 3.8 / 5 on Vivino.  This has a deep ruby colour with cherry flavours and a hint of red currant.  A perfect pairing with the duck: Vespaiola, Maculan, “Torcolato”, Breganze, Veneto, Italy, 2015.  This was served with the Frozen Tunworth cheese with verbena.  This has a brilliant gold colour, with intense aromas of honey, vanilla, brioche and peach.  It is sweet and full-bodied.  It is made from the Vespaiola grape and scores 4.4 / 5 on Vivino: Chenin Blanc Blend, Vincent Alexis Barouillet, “Monbazar”, Vin de France, France, 2018.  This was served with the desserts and scores 3.8 / 5 on Vivino.  It is made from 50% Chenin Blanc, 20% Muscadelle and 30% Semillon grapes.  There is quince, apple and pear on the nose.  It has a superb caramel finish but it’s not too sweet: Meroni, Il Velluto Amarone della Valpolicella Classico Riserva 2011 was served with the cheese selection.  This beautiful Italian red is made primarily from the Corvina grape and it scores 4.4 / 5 on Vivino.  It is rich and dry, with plum and dark fruit on the nose.  It has a full body with high acidity and tannins, perfect with cheese: