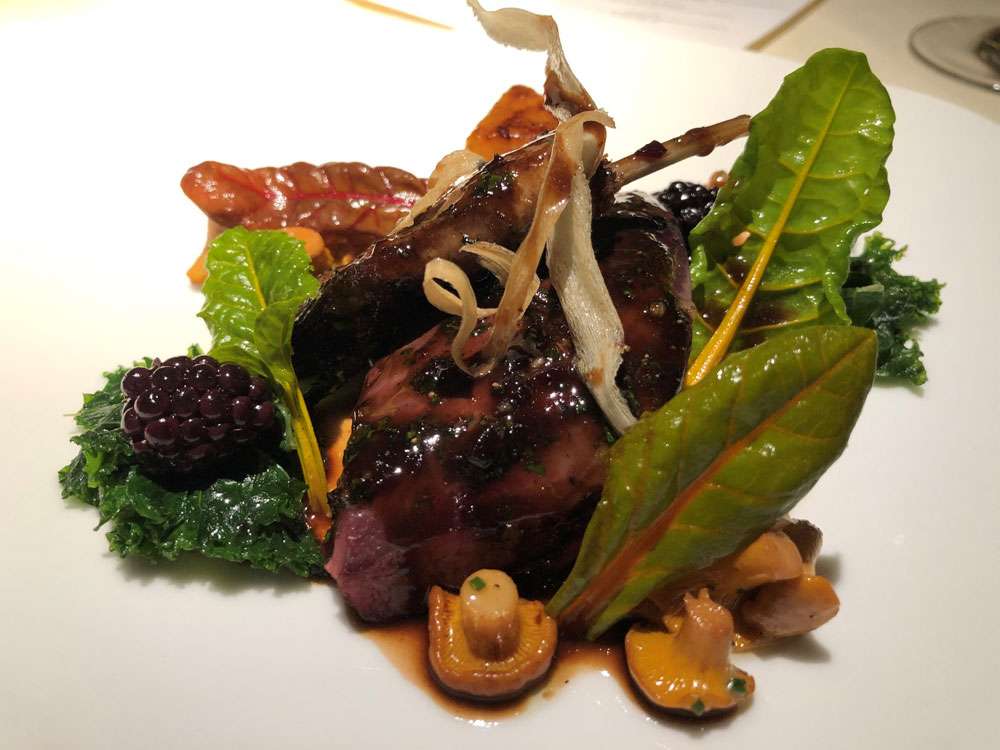 Le Manoir au Quat’ Saisons has one of the most beautiful settings of any UK restaurant, located near the Oxfordshire village of Great Milton.  Parts of the manor house date to the 15th century, although there have been a number of extensions in recent years.  The hotel and restaurant are surrounded by manicured lawns, flower borders, orchards and spectacular sculptures.  There are extensive vegetable and herb gardens that provide the kitchens with fresh, organic produce. The hotel has 32 rooms and suites.

In 1983, Raymond Blanc purchased and refurbished Le Manoir and was awarded two Michelin stars in 1984.  Since 1999, Gary Jones has led the kitchen, retaining the 2 stars and attaining a score of 9/10 in the Good Food Guide.  Holding 2 Michelin stars for 35 years is a remarkable achievement.

We visited the cookery school for the afternoon, then eat in the restaurant in the evening and stayed overnight.  The cookery school caters for all levels, and we attended a half day introductory course.  We thoroughly enjoyed the afternoon and I would recommend the school to anybody who is interested in improving their cookery skills.

Each of the courses were superb.  My favourite dish was the outstanding spiced monkfish, which was bursting with flavour, exemplifying this restaurant’s superb cookery.  For me, my least favourite was the dish that combined crab, lime, coconut and mango.  Its so easy to overcook grouse, but here it was perfectly cooked, tender and very moist, and extra bread sauce was provided on request.

All the accompanying wines worked very well with the food.  This was a superb selection, even though it was the least expensive.  Our sommelier was extremely knowledgeable and explained the details of each of the wines.  He topped our glass up when we were nearing the bottom!

The following morning, we were given a tour of the kitchen by Executive Head Chef Gary Jones.  Gary is a legend in the catering industry and were very lucky to be able to meet and chat with him.  His enthusiasm and passion for cooking at Le Manoir and developing his team are very evident.

There is so much to do here, apart from eating some of the best food available in the country.  I highly recommend the cookery school, there is a highly respected gardening school, and you should explore the wonderful gardens and orchards.

The prices at Le Manoir are relatively high, but the overall experience is worth every penny.  I highly recommend a visit.  I will be returning very soon.

Chef Patron – Raymond Blanc OBE (born 19 November 1949 near Besançon, the capital of the Franche-Comté region in eastern France, between Burgundy and the Jura mountains) is entirely self-taught, but has himself taught and mentored many other famous chefs including:

After training as a waiter, Raymond worked at the Michelin-starred Le Palais de la Bière in Besançon, France. In 1972 he was fired and moved to the UK to work at The Rose Revived in Newbridge, Oxfordshire.  He worked for a time under chef patron André Chavagnon, who had opened a French restaurant, La Sorbonne, in Oxford High Street in 1966.

In 1977, he opened Les Quat’ Saisons in a row of modern shops in Summertown, Oxford.  He recalls: “We mortgaged the house, owed 18 further people, and opened in a corridor between a lingerie shop and Oxfam”.  He soon won “Egon Ronay Guide Restaurant of the Year”.  He gained a first Michelin star in 1979, and then a second star in 1982.

In 1981, Raymond opened La Maison Blanc, a chain of boulangeries and pâtisseries that also contain cafès.

In 1983, he purchased a manor-house in the village of Great Milton, Oxfordshire where he opened Le Manoir aux Quat’ Saisons, a fabulous country house hotel.  Le Manoir was duly awarded two Michelin stars in 1984 after the move, and has retained them ever since. He has also been awarded five AA stars and with a score of 19/20 from respected French guide Gault Millau.

Executive Head Chef Gary Jones – from Merseyside, completed a two-year catering course at Carlett Park on the Wirral.  His first notable kitchen role was working in a small restaurant in Rickmansworth before moving to London and working at the Mountbatten Hotel in Covent Garden, where he trained under a purely classical head chef.

He filled his free time by taking shifts at The Waterside Inn, run by Albert and Michel Roux. Although he was offered a chef de partie position at the Waterside, out of regard for his current head chef at the Mountbatten Hotel, he stayed on until he had completed 18 months at the hotel.  At The Waterside he worked his way through the brigade to chef de partie on the sauce section.

In 1990, a year to the day after taking over the sauce section at the Waterside, he began a new job at Le Manoir, as chef de partie.  After 1 year he was promoted to the role of sous chef, working for Clive Fretwell who was then head chef.

Richard Branson part owned Le Manoir at the time, and a position came up on Necker Island, his private, luxury resort island. In the early 1990s Gary took an executive chef teaching role on the Island.

In 1996 he returned to the UK and by 1998 he had earnt his first Michelin star and four AA rosettes at Homewood Park, Bath.  Next, he headed the kitchen at Waldo’s, the renowned restaurant at Cliveden.  He was awarded his second star, another four AA rosettes and 8/10 in the Good Food Guide.

One day, Raymond Blanc came to dinner at Waldo’s and in 1999 he convinced Gary to re-join Le Manoir as executive head chef.  20 years later Gary Jones still runs the kitchen at Le Manoir, every year retaining the two Michelin stars that the restaurant has held and earning the maximum five AA rosettes. Chef Pâtissier – Benoit Blin, from Normandy, France is one of Europe’s leading pastry chefs.  In 1991 he became chef de partie in pastry at the Ritz, Paris.  In January 1995, he joined the staff at Le Manoir as pastry chef.  Today, as Chef Pâtissier, he leads the Le Manoir team of 13 pastry chefs, making everything from the wide variety of breads, freshly baked for each service, to the range of chocolates, ice creams, pastries and plated desserts.  He won the Pastry Chef of the Year in 2009.  Having been involved with the UK pastry Team as team president in the 2011 pastry World Cup in Lyon, he is now the Chairman of the UK Pastry Club.  He was awarded the MCA in 2005 (MCA – Master of Culinary Arts is the ultimate recognition and is awarded once every 4 years).  Benoit is also a judge on Bake Off: The Professionals.

The Hotel and Restaurant: The side of the hotel, approached from the gardens, with the terrace and restaurant veranda on the right side: The main restaurant after the dinner service: Preparing lunch in the main kitchen: Artichokes, both real and a bronze by Lloyd Le Blanc, with mushrooms in the background: Some of the mushrooms at Le Manoir are huge, with the Scare Crow in the background: The Mother of the Garden is a fabulous bronze statue by Judith Holmes Drewry: The Japanese tea house and garden are perfectly tranquil: The Japanese tea garden reveals itself as you explore the gardens: The lake with bronzes of two swans in flight, and a flock of 29 terns, both by Lloyd Le Blanc, and a dragon fly in bulrushes by Ian Gill: The lake and swans: The cookery school with Cookery School Director, Mark Peregrine, who brings over 30 years’ experience to the role and has a natural ability to explain the different cooking techniques and processes, and make cooking seem possible: The two starter courses – chargrilled garden beetroot, with walnut pesto and lemon confit, and the Cornish crab, with kaffir lime, coconut, passion fruit, were accompanied by a Riesling Hohenrain 2016, Schloss Reinhartshausen, from Rheingau, Germany.  This white wine scores a 3.8 / 5 on Vivino.  It is 100% Riesling grapes.  There are hints of apple, tangerine and peach, with some citrus notes.  It is clean and dry on the palate and has good minerality.  It is ideal with cured meat, shellfish, poultry and pork. The truffled hen’s egg, with wild mushroom tea and truffle was accompanied by a Saint-Romain 2016, Domaine de Chassorney, “Combe Bazin” from Saint-Romain, France.  This Burgundian, Cote de Beaune white wine scores a 4.2 / 5 on Vivino.  It is 100% Chardonnay grapes.  There are honey, citrus, lemon, and pear notes.  There is flinty minerality.  It was smokey and there were hints of burnt toast.  The wine has great acidity.  It works well with cured meat, shellfish, pasta, rich fish (eg salmon) and mild cheeses. The spiced monkfish, with alliums and aromatic Cornish mussels was accompanied by an Engelgarten Le Jardin des Anges, 2016, Domaine Marcel Deiss, from Alsace, France.  This wine scores a high 4.3 / 5 on Vivino.  There are aromas of lemons, pears and apricot, and there is intense minerality.  This wine is excellent with creamy food, and can accompany veal, venison, pork, shellfish, rich fish, spicy food, poultry and mature cheeses.  It is made from a blend of Pinot Noir, Pinot Gris, Riesling and Muscat Blanc grapes. The roasted grouse, with braised red cabbage, bacon, and bread sauce was accompanied by a young Gevrey-Chambertin Vieilles Vignes, 2017, Domane Marc Roy, from Burgundy, France.  This Cote de Nuits Burgundy scores a 4.4 / 5 on Vivino.  There are red fruit, raspberry and strawberry notes, with oak and vanilla.  This powerful red wine is 100% Pinot Noir with a medium to full body and medium tannins.  It works well with veal, game, beef and poultry. Both desserts, the Autumnal still life pre-dessert with quince and chestnut, and the seasonal pear Almondine, with caramel croustillant, and ginger sauce, were accompanied by a Ruster Ausbruch 2016, from the Feiler-Artinger winery, from Burgenland, Austria.  This dessert wine scores a 4.2 / 5 on Vivion.  It is made from Chardonnay, Weissburgunder and Weischriesling grapes.  It is rich, prune like character, with honey, apricot, raisins and dried fruit.  The town of Rust is best known for its world-class late harvest wines.  The “Ruster” describes that it is from this town, and the “Ausbruch” describes the method of only picking out the most perfectly shrivelled & botrytized grapes.