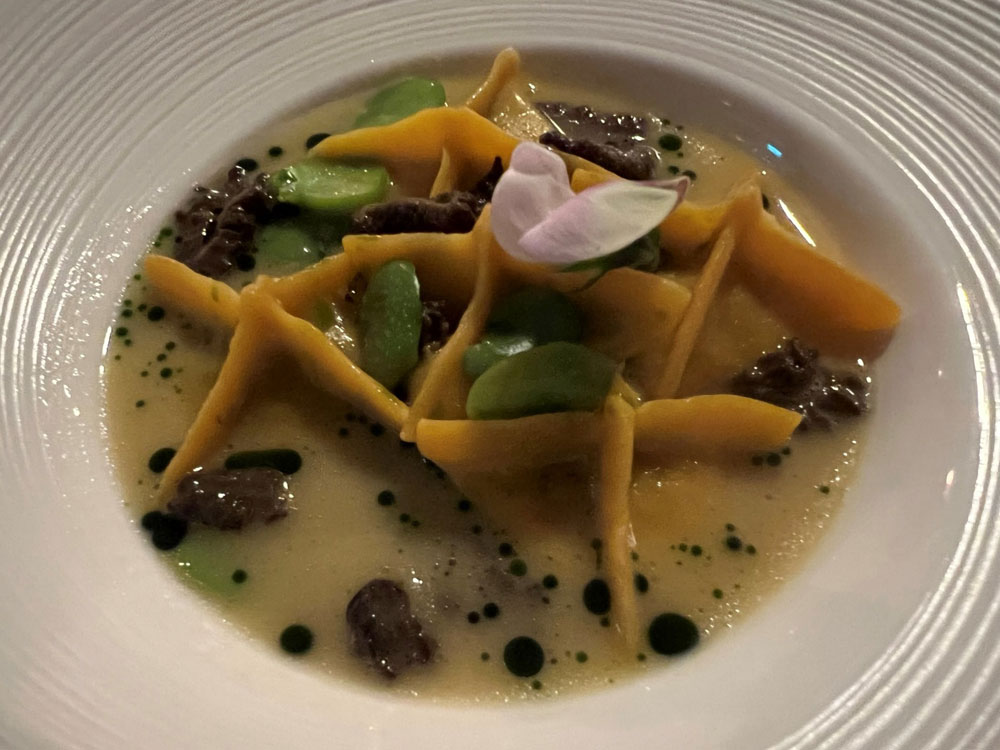 Le Gavroche was opened in 1967 by Michel and Albert Roux, although the original premises were at 61 Lower Sloane Street until 1981.  Its name comes from the character Gavroche in Victor Hugo’s Les Misérables.

On our latest visit, we arrived early and were seated in the bar area.  The bar is located upstairs on the same level as the front entrance.  When you are seated, it is remarkable that you can’t hear any noise from the restaurant downstairs, and you might think you are the only customers.  We were served three canapes – taramasalata in a taco shell, leek and truffle croquette served with a parmesan mousse, and a coronation chicken.  All of these were good, and the tara was especially tasty, but many restaurants are now serving similar canapes, and maybe Le Gavroche needs to upgrade theirs.

We were escorted downstairs to our table.  As you descend, you can start to hear the other guests talking and enjoying their dinner, and you will be surprised at how many people are there!

To start, we chose one of the classic Roux signature dishes, the Soufflé Suissesse, which is a twice-cooked soufflé made with Cheddar, Gruyere and double cream.  The cheese and double cream make for a rich dish, but the soufflé is light and airy, and melts in the mouth.  It’s packed with flavour.  This is an exceptional dish that I order every time I visit Le Gavroche!

We also chose two other starters.  The fagottini, which are mushroom filled pasta shells, with morel, broad bean and Madeira ragout, are served with a wild garlic oil.  This was fresh and bursting with flavour, with well-made, silky pasta.  We also tried the butter poached lobster tail, with grilled green asparagus, asparagus shavings, and lobster jus.  The lobster was precisely cooked and very sweet.  This was another very good starter course.

The main course of roast veal loin, with fresh peas, new season onions and gem salad was good.  The veal was very tender, and the vegetables and salad brought a very clean freshness to the dish.

The second main was roast turbot on the bone, with braised white asparagus, parsley, tarragon and hollandaise.  The turbot was precisely cooked, and roasting it on the bone had added even more flavour.  The hollandaise was excellent.  This was a very good main course.

We did not order desserts or cheese from the extensive cheese trolley.

Petit fours, including a madeleine, chocolates, and a lime jelly, were served with coffees.

The service was top drawer, attentive but not intrusive.  After the meal, Michel Roux walked round the tables and we enjoyed a short chat with him.

This was an excellent dinner that we very much enjoyed.  Le Gavroche is still operating at a very high level.

Each table is decorated with an ornament made from silver cutlery: