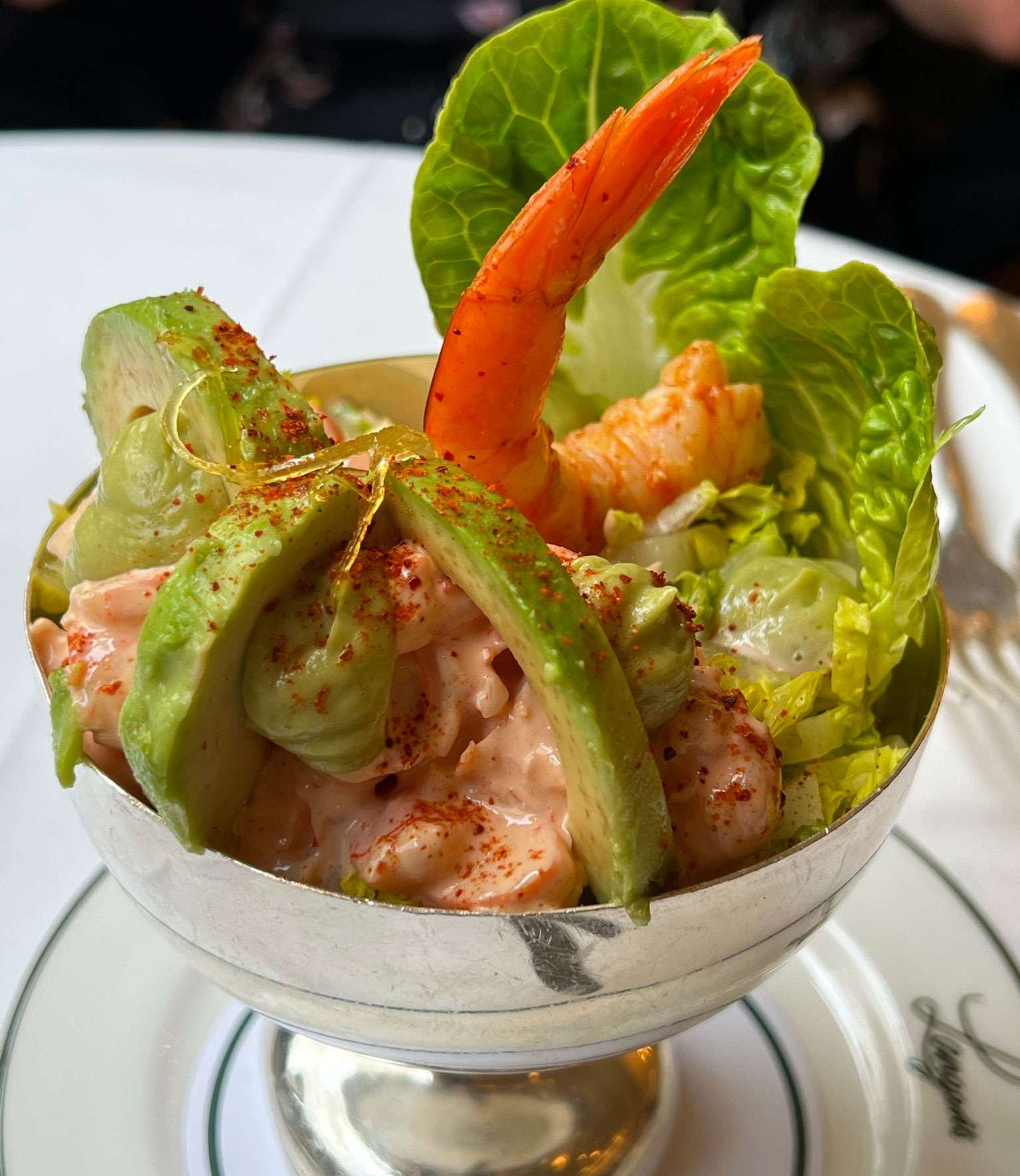 Langan’s Brasserie was opened by Peter Langan in October 1976 in partnership with the actor Michael Caine.  Richard Shepherd, the former head chef at the Michelin starred Capital Hotel in London, joined in 1977.  It was the place to go and be seen.  Unfortunately, it closed in March 2020 following Covid and did not reopen.  Happily, it has been rescued and was reopened in November 2021 by restaurateurs Graziano Arricale (who’s also behind Chucs) and James Hitchen (former CEO of a Manchester restaurant group) who have switched the orange neon signage back on and given the restaurant a complete refurbishment.

We went for lunch, and I was very impressed.  We started with cocktails at the new bar that is situated opposite the entrance.  Then we were escorted to our table to order lunch.  We started with a shellfish cocktail with lobster, Obsiblue prawn, avocado, Marie-Rose sauce and lime.  We also ordered the starter of five Obsiblue prawns with aioli.  These superb Obsiblue prawns have a soft, slightly sweet flesh, perfect for seafood cocktails or just for dipping in aioli.

The Langan’s spinach souffle was as good as it ever was.  It is served with an anchovy and hollandaise sauce, with the anchovy providing the saltiness for the dish.  I would have liked more of the sauce.

For mains we ordered a classic Caesar salad with Romaine lettuce, parmesan, sourdough croutons, and chicken breast.  This is a large portion, with crispy lettuce, moist chicken breast slices and a very good Caesar dressing.

I tried the Dover sole Meuniere which was perfectly cooked, and filleted at the table on request.  I added some fries as a side dish.  These were very good, crispy, and evenly salted throughout.

We did not order dessert, but enjoyed some excellent chunky chocolate with nuts, which accompanied our coffees.

This was a very enjoyable lunch.  The food was good and the service professional and friendly.  I visited Langan’s several times before it closed, and this newly refurbished restaurant has managed to maintain the vibrant buzz it always had. From the grill menu:

Langan’s Brasserie was opened by Peter Langan on 20 October 1976 in partnership with the actor Michael Caine, at the site which had previously housed the Le Coq d’Or.  Richard Shepherd, the former head chef at the Michelin starred Capital Hotel in London, joined in 1977.

Peter was a larger-than-life character.  There were many stories of his antics when he ran the restaurant.  He had Wayne Sleep dance naked across the tables; he extinguished a fire in the kitchen with Moet & Chandon champagne; when somebody complained about finding a cockroach under the table, he swallowed it whole and washed it down with Krug; he bet Shell heiress Olga Deterding five pounds that she wouldn’t sit naked in his window all afternoon, which she did; when Diana, Princess of Wales came to dinner he invited himself to her table and fell asleep; he went on a five-day foreign bender with the painter Francis Bacon and, on his return to Heathrow, put himself through the luggage carousel.

A notorious alcoholic, Peter died at the age of 47 on 7 December 1988, several weeks after a fire at his home in Essex which he might have started himself.  Richard Shepherd subsequently bought Michael Caine’s share of the company and become the sole owner of Langan’s Brasserie.

The restaurant closed in March 2020 following the Covid outbreak and did not reopen.  Thankfully it was rescued from administration, and in November 2021 it was reopened by restaurateurs Graziano Arricale (who’s also behind Chucs) and James Hitchen (former CEO of a Manchester restaurant group) who have given the restaurant a complete refurbishment.