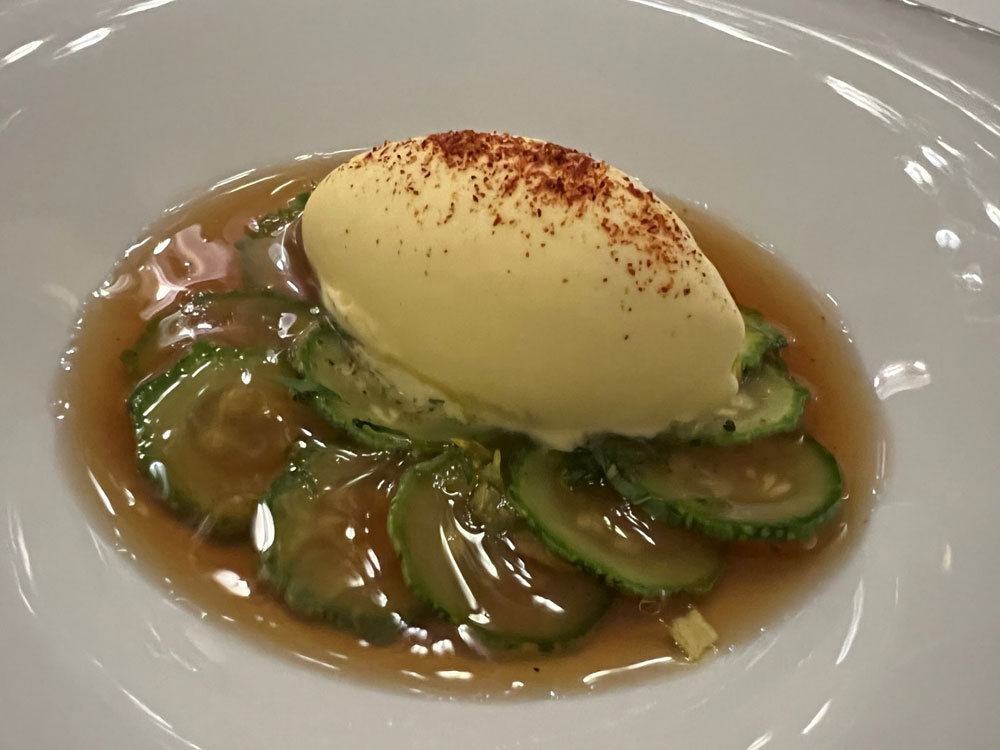 The Four Seasons hotel is spectacular and has a very good bar that serves a superb classical Negroni with Tuscan gin “Ginarte” and vermouth “Bitter Fusetti”.

We started with a selection of bread and breadsticks that were made from scratch on the premises.  These were the best breadsticks I tasted during this trip to Florence.

The first appetizer was zucchini marinated with mint, San Miniato saffron ice cream sprinkled with cayenne pepper, and an onion infusion.  San Miniato is a town and commune in the province of Pisa known for the cultivation of tomato “sanminiatese”, artichoke and saffron, and famous for its white truffles.  The course was simple, but used very good local ingredients, and had great depth of flavour.

The first course of risotto with tomatoes and ‘‘Pecorino di grotta” cheese reminded me of the flavours of a pizza.  Again, top quality local products were used, and the flavour was excellent.

Our other first course was Livornese (Leghorn) cockerel agnolotti, Parmigiano Reggiano cheese with a generous shaving of San Miniato summer truffle.  Agnolotti is a type of pasta typical of the Piedmont region, made with small pieces of flattened pasta dough that are folded over a filling of roasted meat or vegetables.  The pasta was very well made, and the cockerel had a deep flavour, enhanced with the Parmesan and truffle.  This was an exceptional dish.

The main course was Casentino lamb from the “Fracassi selection” (Simone Fracassi is a famous Italian butcher, known as the “King of Chianina meat”, with a butchery in Rassina in the province of Arezzo), lamb sweetbread, with carrots smoked with hay, and cardamom mousse.  The lamb was perfectly cooked, and the sweetbreads added a nice dimension to the dish.

We were served a palate refresher of watermelon sorbet, with a sugar waffle on top.  The dessert was a very nice soft fig pie with pine nuts ice cream.

Coffee and excellent petit fours followed.  The petit fours included a peach and lavender jelly, a coconut and almond tartlet, a white chocolate macaroon, a cherry jelly, a melon tartlet, and a coffee ice cream.  We chose a coffee blend from the specialized coffee menu.  The coffee was ground and brewed on a trolley at the side of our table.  We tried the intense Jamaican Wallenford Estate Blue Mountain, and the Columbian Barrique di Rum that had notes of rum and cherry from the barriques the beans were aged in for 8 years.  Both coffees were excellent, and it was nice to see the coffee being carefully prepared and vacuum brewed.

The food at Il Palagio was excellent, as was the service and our overall experience.  This is a restaurant working at the top of their game.  We also enjoyed the pre-dinner cocktails in the bar and appreciated the knowledge and professionalism of the staff.  When I return to Florence, this will be one of the restaurants I will revisit. Warming the water for the coffee: Paolo then worked for ten years in Brazil, first at the Hotel Fasano in Rio de Janeiro, and then at the Four Seasons Hotel São Paulo.  He led the Neto restaurant for two years as executive chef, and was awarded the Gambero Rosso International’s Tre Forchette Tricolore in 2019.