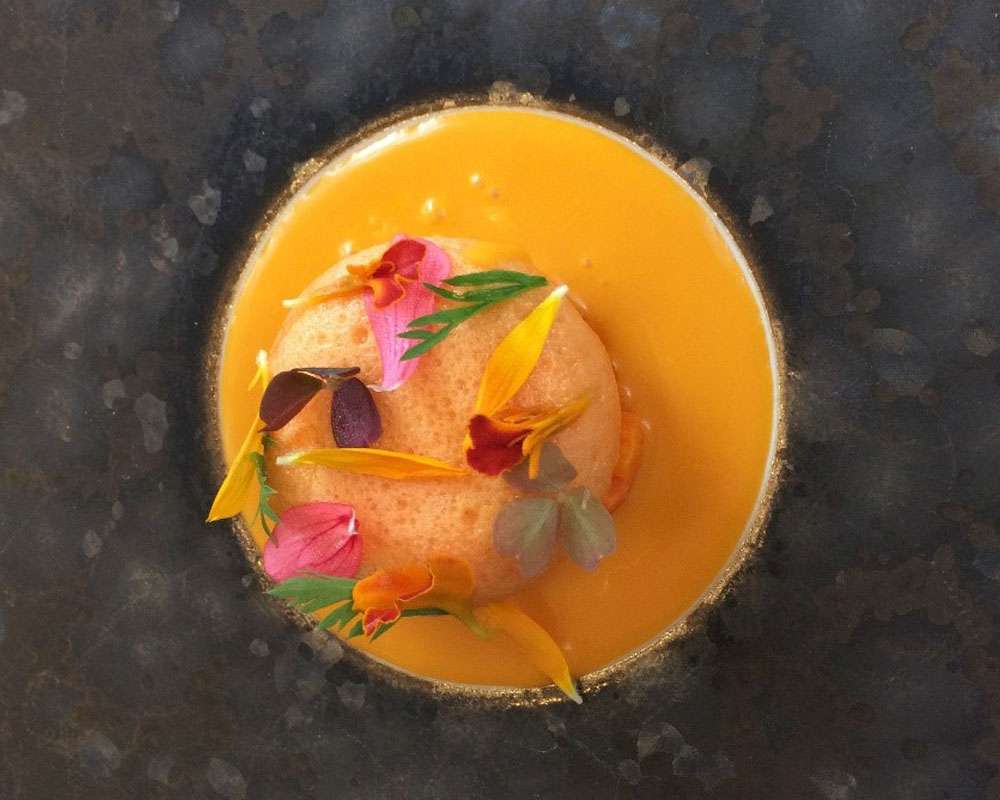 Chef: Chef Ronan Kervarrec (Ronan joined Hostellerie de Plaisance in 2016.  He was previously at the 2 star Chateau de la Chèvre d’Or, Royal Mansour in Marrakesh, and a finalist of the golden Bocuse France 2012.  He is also a member of the Culinary College of France since 2014).

Saint-Emilion is a medieval village located in the heart of the famous Bordeaux wine area.  Saint-Émilion is one of the principal red wine areas of Bordeaux along with the Medoc, Graves and Pomerol.  The region is much smaller than the Médoc and adjoins Pomerol.  As in Pomerol and the other appellations on the right bank of the Gironde, the primary grape varieties used are the merlot and Cabernet Franc, with relatively small amounts of Cabernet Sauvignon also being used by some châteaux.

The Hostellerie de Plaisance hotel and restaurant is a restored monastery, and is located at the heart of the village, with a fabulous view of the vineyards and village below.  James Martin trained here when he was a young lad starting his career, and featured the restaurant in his French Adventure series (Episode 1).

The food is outstanding, and the service was exemplary.  There is a huge difference between 1 and 2 star Michelin cooking, and this restaurant is 2+ star standard.

Review: The views from the hotel terrace over the village and vineyards are magnificent.

Saint-Emilion Wines:  Bordeaux produces some of the finest wines in the world.

Saint-Emilion sits on the north of the River Dordogne.  It is designated for red wines only.  A fine Saint-Emilion can be as good as a top Medoc, in my opinion, but the wines are subtly different.  This is probably because in Saint-Emilion the dominant grape is Merlot, with Cabernet Franc as a blending partner (a Medoc has Cabernet Sauvignon as the main grape).  Also, Saint-Emilion is located further inland than the Medoc, which mean that its summers are slightly warmer and dryer, and the grapes are harvested slightly earlier.  The soil in Saint-Emilion is mostly limestone, while that in the Medoc is gravel.

So, these factors result in a young Saint-Emilion being less tannic and austere as a young Medoc, and the key aromas are from the pluminess of the Merlot and herbal characters from the Cabernet Franc, instead of the blackcurrant aroma of Cabernet Sauvignon.

In 1955 the Saint-Emilion wines classified (there were not classified in the Bordeaux Wine Official Classification of 1855, that covered wines from the Medoc and Graves regions).  The Saint-Emilion list is updated every 10 years or so.  The fifth classification of Saint-Emilion wine, announced in September 2006 and comprising 15 Premiers grands crus classes and 46 Grands crus classes, was challenged by four dissatisfied producers that had been demoted.  Then there were further complaints about the 2012 classification, and legal proceedings are underway.