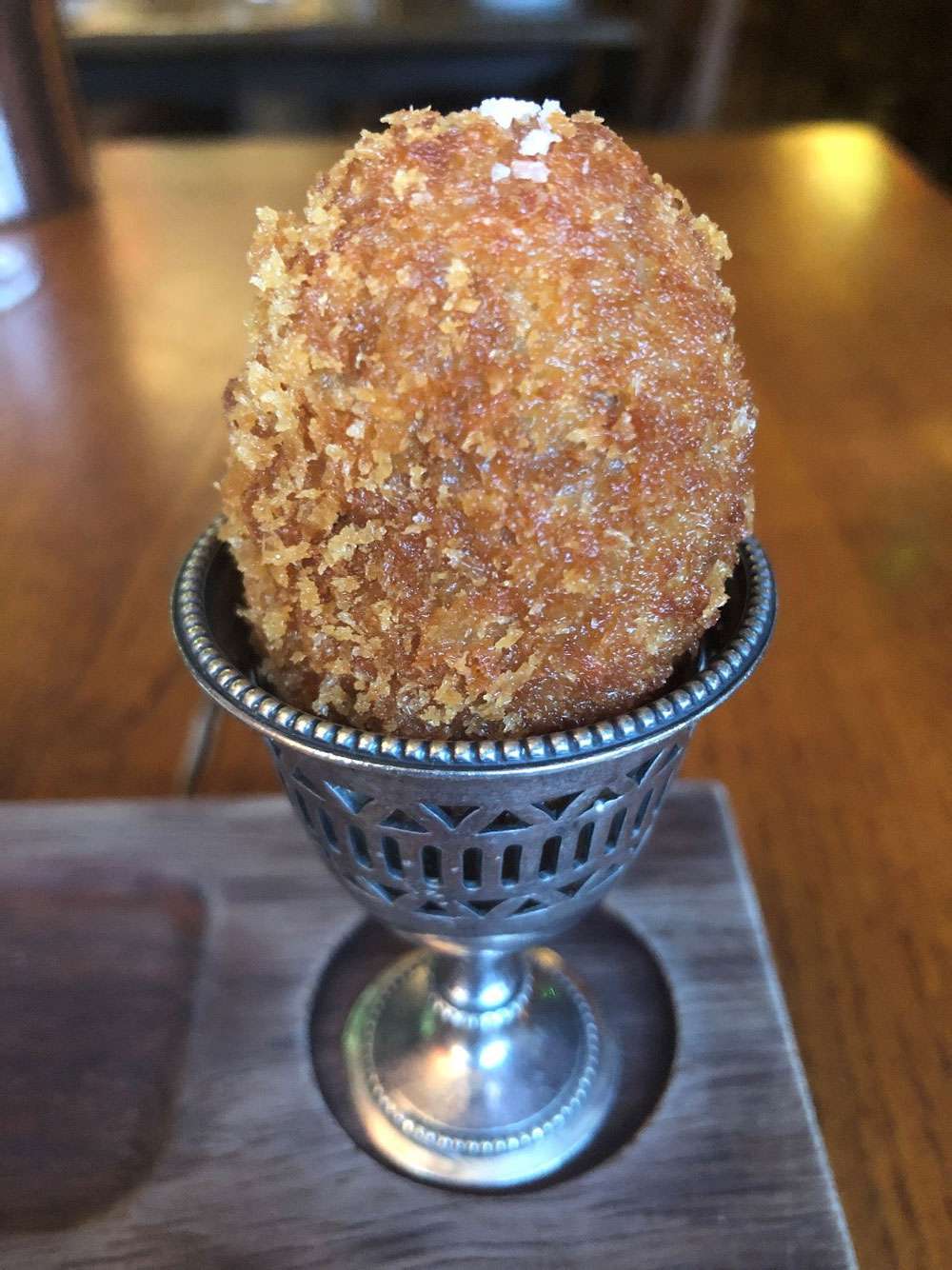 Peter originated from Yorkshire.  He began his career in the hospitality industry at the age of 16, working in the 2 AA rosette kitchen at Middlethorpe Hall in York.  Starting out as a kitchen porter Peter soon elevated himself up the ranks in the kitchen taking on the role of commis chef and working his way up to become chef de partie.

From here he moved to Juniper in Manchester, working for Michelin starred chef Paul Kitching.

After a three-year stint working abroad, Peter returned to the UK where he joined Heston Blumenthal’s Hind Head in Bray as junior sous chef.  Pete steadily rose through the ranks, being made sous chef, then senior sous chef and finally head chef in November 2017.

Review: We have visited the Hind’s Head a number of times over the past few years and always enjoyed the food and experience.  The pub was established in the 15th Century, and Heston has tried to keep the decor quintessentially old English.  The beers are excellent and the food is superb, definitely worth its 1 Star rating.

The dish of the night was the Oxtail and Kidney pudding.  If you visit I recommend that you try this suet sensation.  Also, Heston’s chips are in a league of their own.

The service is excellent.  The staff are very friendly and knowledgeable.  Even though the pub was very busy, they took time to explain the dishes to me in detail, and even showed me round the kitchen and introduced me to Executive Chef Peter Grey.

This is a great Michelin pub experience.  I thoroughly recommend you visit.  The problem is that there are so many other fabulous destinations in Bray, and so little time!

The Hind’s Head dates from the 15th century and was converted into a restaurant in the 1920s.

In 1947, Philip Mountbatten (now the Duke of Edinburgh) held his bachelor party there prior to his marriage to Princess Elizabeth.  Prince Philip returned in 1963 along with a party of fifty guests which also included Queen Elizabeth II, Prince Charles, the Princess Royal and King Olav V of Norway.

It was sold by a brewery to Heston Blumenthal in 2004.  He made the decision to serve British cuisine rather than the molecular gastronomy showcased at his nearby Fat Duck restaurant.

The pub entered itself in the 2012 Scotch Egg Challenge, as judged by Tom Parker Bowles and others.  The entry from the pub placed second; it was an Iberico pork sausage-meat covered quail’s egg, coated in a breadcrumb mixture seasoned with salt infused with vinegar.

In 2017 the pub underwent a complete refurb which saw the upstairs transform from a function room into a lounge bar with a hunting lodge theme featuring stained glass windows, taxidermy on the walls and Persian rugs.

In 2007 it was named the fourth best pub in the UK for food in the PubChef awards.  The Michelin Eating Out Guide named The Hinds Head as the best pub in the UK in 2011.  It was awarded a Michelin star in the 2013 edition of the Michelin Guide.  It was the fifth UK based star for Heston Blumenthal, and had previously been named a Bib Gourmand restaurant.  It holds three AA Rosettes.