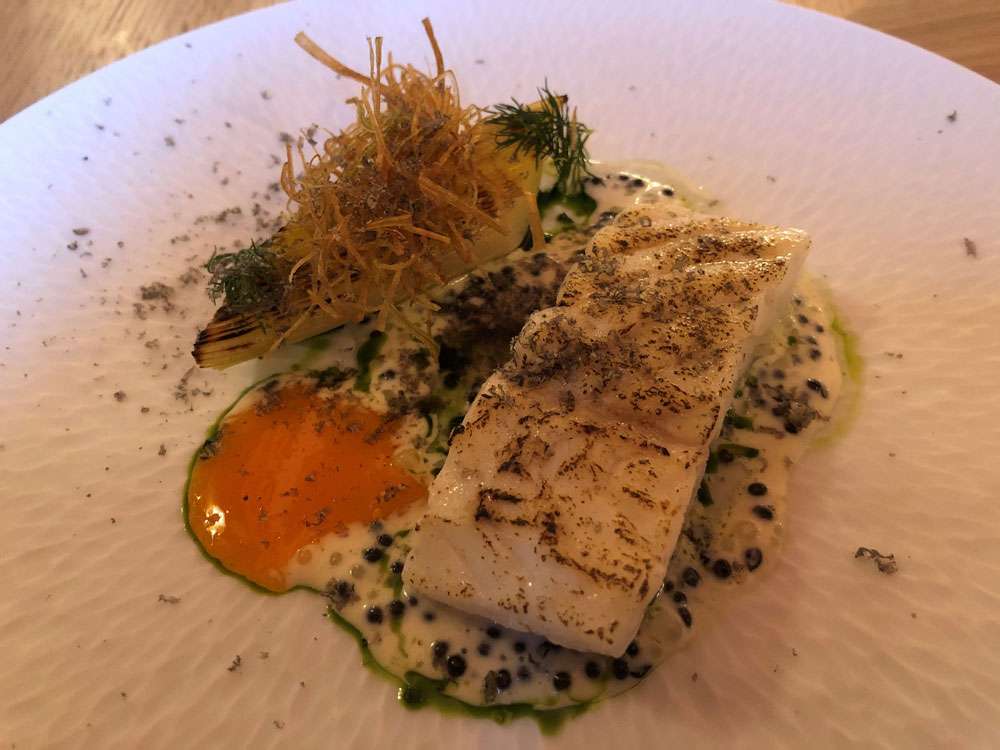 The review: Two months after closing for a major refurbishment to coincide with the restaurant’s 10th birthday, Hélène Darroze at The Connaught has reopened and is serving superb food.  With 2 Michelin stars, this French restaurant also offers one of the most extensive cellars in London and impeccable service.

The recent refurb has seen the restaurant’s interior been given a fresh, contemporary much lighter interior by the French designer Pierre Yovanovitch, who stripped back the mahogany stained panels.

The restaurant tables are large and well-spaced.  Unfortunately, there are no table cloths.  The chairs are very comfortable.

It’s been a while since I have been to a restaurant and every course has been as consistently good as this.  I chose Foie Gras, Smoked Eel, Turbot, Sweetbread and the Signature Baba dessert.  All five dishes were well executed and tasted superb.  This is unquestionably one of the finest restaurants in London.  The food was exceptional, the accompanying wines all worked well and were not too over-priced, and the service was professional and friendly.  I highly recommend a visit.

The a la carte menu

In 1990, after graduating from university, Darroze began working for Alain Ducasse in the office of the 3 Michelin star Le Louis XV restaurant in Monaco.  After she was convinced to enter the kitchen by Ducasse, she worked for him for three years, before returning to her family’s restaurant and kept its existing Michelin star.

In 2008, Darroze was named as the new chef at the Connaught in London, replacing Angela Hartnett, and took over as part of a £70m refurbishment of the hotel.  Famously, Jay Rayner described the food there as “Two of the very worst dishes ever to be served to me at this level.”  However, the restaurant was awarded a Michelin star in 2009, and then a second star in 2011.

In 2012 Darroze was admitted into the French Legion of Honour as a Chevalier (Knight) by President Nicolas Sarkozy, and was recognised by Veuve-Cliquot as the World’s Best Female Chef in 2015. The Helene Darroze Restaurant following the recent refurb by the French designer Pierre Yovanovitch, who stripped back the mahogany stained panels: The Christmas tree in the hotel lobby: To accompany the foie gras – Domaine Georges Vernay Les Terrasses de L’Empire Condrieu 2018 from Condrieu, France.  This Northern Rhone Viognier grape scores a 4.2 / 5 on Vivino.  This has apricots, peach and tropical fruits on the nose.  You can taste some minerality and salinity.  Perfect white wine to accompany the foie gras: To accompany the crab – Patrick Piuze Chablis “Terroir de la Chapelle” 2017 from Chablis, France.  This white Burgundy scores 3.9 / 5 on Vivino and 89 / 100 by Robert Parker.  This is a complex, elegant white wine with moderate acidity and sweetness.  It has green apple, pear and lime notes and is a perfect accompaniment to shellfish, pork, and rich fish dishes: To accompany the lobster – David and Nadia Chenin Blanc, 2017, from Swartland, South Africa.  This Chenin Blanc scores 4.0 / 5 on Vivino.  It is rich and full bodied with apple, pear and peach notes, and good minerality.  This is a great wine with lean fish, shellfish, such as the beautiful lobster served here, and spicy food: To accompany the smoked eel – Vincent Girardin Les Vieilles Vignes Meursault, 2015 from Meursault, France.  This Burgundy Cote de Beaune white scores 4.0 / 5 on Vivino.  This is slightly smoky, with sea salt notes.  It is buttery, with some oak, with citrus and vanilla notes and good minerality.  This wine is perfect with cured meat, shellfish, pasta and rich fish.  It was a great accompaniment to the smoked eel: To accompany the venison – Benedicte et Stephane Tissot Singulier Trousseau, 2017, from Arbois, France.  This Jura red wine, made from the Trousseau grape, scores 4.1 / 5 on Vivino.  It has strawberry and cherry notes, with some minerality and pepper.  Perfect with venison: To accompany the turbot – Yves Cuilleron Cote-Rotie Bassenon, 2016, from Cote-Rotie, France.  This Northern Rhone red wine scores 4.3 / 5 on Vivino.  It is made from Shiraz/Syrah and Viognier grapes.  There are blackcurrants, plums, pepper and dark chocolate notes: To accompany the sweetbread – Bolyki, Egri Bikaver 2016, from Eger, Hungary.  It was decanted from a Nebuchadnezzar 15L bottle displayed in the centre of the restaurant: To accompany the sweetbread – Bolyki, Egri Bikaver 2016, from Eger, Hungary.  This scores a 3.5 / 5 on Vivino.  It has plum, blackcurrant and cherry notes: The dessert wine to accompany the Baba was a fabulous Szepsy, Tokaji Szamorodni, 2013, from Hungary.  This Tokaji dessert wine scores a high 4.5 / 5 on Vivino.  There are orange blossom, honey, ripe apricot and peach notes, with a bright, intense colour.  It is made from a blend of Muscat Blanc, Furmint, Kovidinka and Zeta grapes: To accompany the signature Baba dessert you can choose from three Darroze Armagnacs.  Each Armagnac vintage will lend a subtly different flavour to the Baba.  We chose the 1980 vintage: On the full Armagnac trolley there is a wide selection from early 1900s up to much more recent vintages.  With my coffee, I chose the Darroze 1974 vintage: