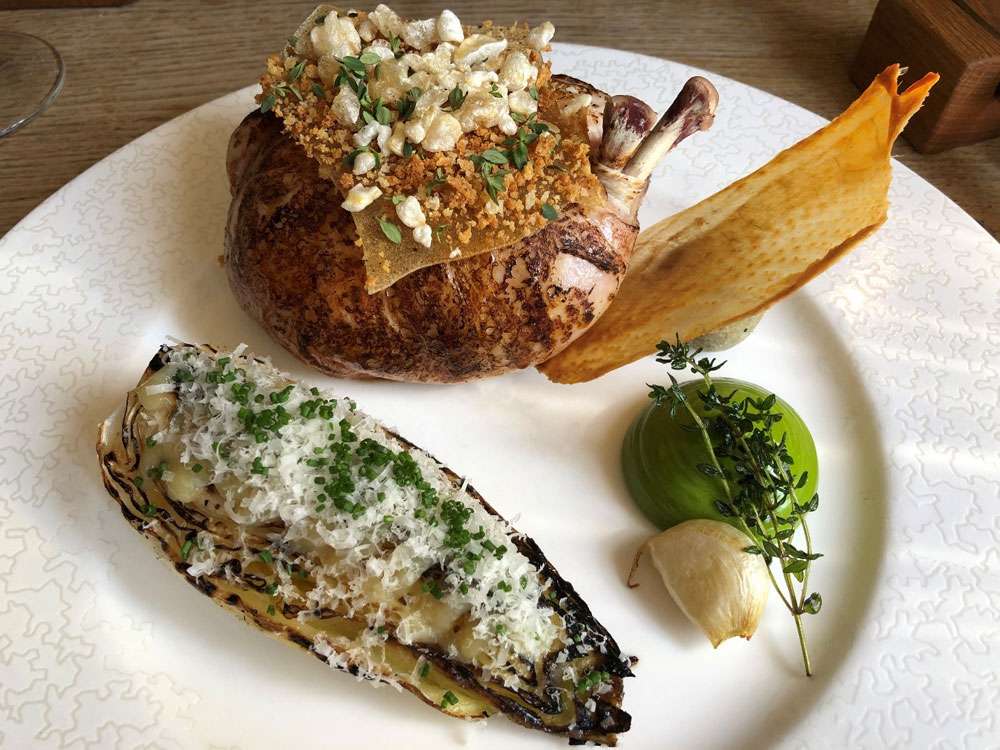 Chef patron: Tom Kerridge – Tom’s first role in a professional kitchen was as a commis chef at Calcot Manor in Tetbury in 1991.  He moved around several restaurants as a chef de partie before joining Rhodes in the Square as sous chef under Gary Rhodes in 1999.  He spent a further two years as sous chef at Odettes in London.  In 2001, he became head chef for the first time, at Bellamys Dining Room, and then at Great Fosters in Surrey.  Tom then moved back to London to become senior sous chef at Monsieur Max until 2003, before moving to Adlards in Norwich as head chef once more.

Tom appeared in series five and six of the Great British Menu, providing main courses to the final banquet on both occasions, and has subsequently appeared as a judge on the programme every year since competing.  In series 5 he won with a main course of slow-cooked Aylesbury duck with duck fat chips and gravy.  In series 6 he won with a hog roast.

He has also appeared on Saturday Kitchen, co-presented Food and Drink, and presented his own food programmes.

Tom also owns and runs two other pubs in Marlow – the Butcher’s Tap (pairing a pub and a butcher’s shop) being the most recently opened and The Coach, which achieved its first Michelin star in 2017.  Tom also overseas Kerridge’s Bar and Grill at The Corinthia Hotel in London.

Head Chef: Jamie May was promoted to Head Chef on 1st May, 2019, replacing Aaron Mulliss who had been Head Chef for 12 years.  Jamie has worked at the pub for eight years, moving through the ranks from junior sous chef to senior sous chef, and now to the new head chef.

Review: The Hand & Flowers is the only pub in the UK with two Michelin stars.  It is owned and operated by Tom Kerridge and his wife Beth Cullen-Kerridge.  The pub is very popular and Tom is a well-respected and well-liked chef.

The pub gained its first Michelin star and three AA rosettes within a year of opening, and a second Michelin star in the 2012 list.  It was named the AA Restaurant of the Year for 2011–12.  However, some of the reviews from food critics have been mixed.

The menu reflects Tom’s preference for good, honest, pub food like pork and mushroom terrine, and chicken or steak and chips.  However, the cooking is very accomplished, and the dishes are created to satisfy with maximum flavour.  These are generous portions and I struggled to finish my main course chicken, which was a pity because it was outstanding!

However, I’m not sure about the rating when you compare the experience here to other 2-star restaurants, like Le Manoir or Le Gavroche for example.  This isn’t a criticism of the pub or Tom, who I can’t praise enough, it’s a reflection on the mystery associated with Michelin stardom.

Tom’s food is innovative and of the highest quality.  The service is friendly and knowledgeable.  We had a great experience and I will be returning.  I’m also looking forward to trying out Tom’s other establishments.

The Hand & Flowers is open daily for lunch and for dinner Monday through Saturday. The restaurant offers an a la carte menu and at lunchtime there’s a well priced set lunch menu.