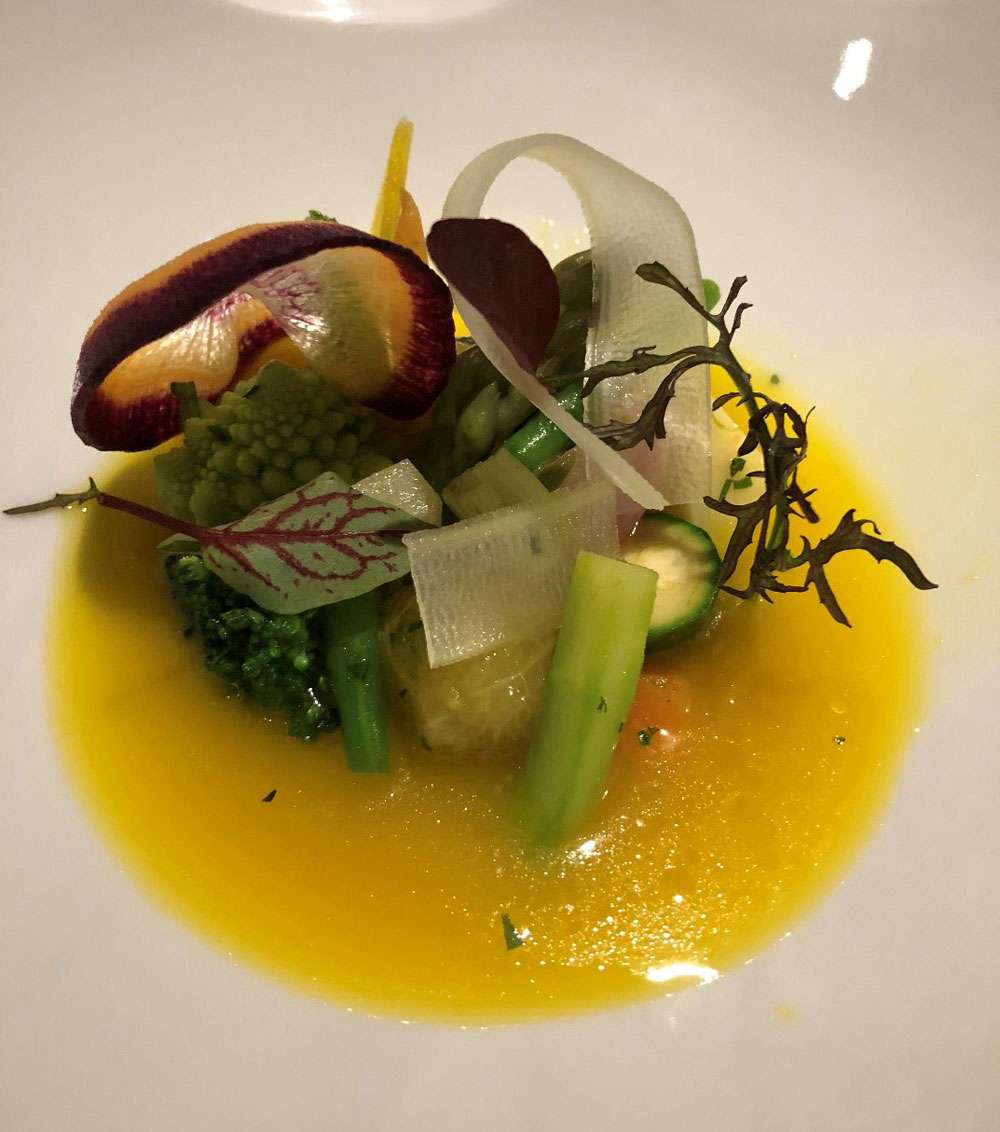 Master Chef: Juan José Carmona – previously with the 5 star Hotel Hacienda Benazuza el Bullí, near Seville, and with Chef Benito Gomez at his one Michelin star Bardal restaurant in Ronda.  He joined El Lago in 2013.

The restaurant: Opened in 2000, Restaurant El Lago is situated in the beautiful backdrop of the Greenlife Golf Course, Elviria Hills, Marbella.  The restaurant has great views overlooking the golf course and lake:

The restaurant has great views overlooking the golf course and lake

A Michelin star was awarded in 2005

The bar adjoins the restaurant

The walls are decorated with photographs from the Ángel Ábalos collection

Review: This is one of the best restaurants I have visited in Spain.  Unfortunately, it was dark and raining heavily when we arrived, so we missed the patio and great views.  Most importantly, the food was exceptional and not overly expensive, and the cost of the wine pairing was also very reasonable.  The service was very friendly and efficient.

All of the dishes on the tasting menu were at least very good, and some were exceptional and memorable.  The vegetable ceviche was remarkable, and I would return just for this.  The steak tartar with fried egg sauce was a close second.

I will definitely return and try some of the dishes from the a la carte menu.  Overall, this is an exceptional restaurant with great cooking, and I can’t recommend it highly enough!!

The dessert was a chocolate mousse with saffron and cocoa ice cream.  The waiter suggested we paired this with our coffee (which surprised me), but we went for a very nice Pedro Ximénez dessert sherry instead.

Pedro Ximénez is most widely grown in the Spanish wine region of Montilla-Moriles, where the grapes are used to make this fortified sherry-style wine, labelled as PX.  After a harvest the grapes are traditionally laid out on mats to further desiccate and dry in the sun.  The wine is high in sugar with low acid and it has a very sweet and strong aroma with flavours of raisins.  The wine can be aged in a solera, similar to Sherry, with the age of the solera often stated on the wine label, in our case 1927.

The solera process is very traditional.  A succession of barrels are filled with the sherry (Madeira, Lillet, Port wine, Marsala, Mavrodafni, Muscat, and Muscadelle wines; Balsamic, Commandaria, some Vins doux naturels, and Sherry vinegars; Brandy de Jerez; beer; rums; and whiskies, e.g. Gelfiddich, are all be made using a solera process) over a series of equal aging intervals (usually a year).

A group of one or more containers, called “scales”, “criaderas” (‘nurseries’), or “clases” are filled for each interval.  At the end of the interval after the last scale is filled, the oldest scale in the solera is tapped for part of its content, which is bottled.  Then that scale is refilled from the next oldest scale, and that one in succession from the second-oldest, down to the youngest scale, which is refilled with new product.

This procedure is repeated at the end of each aging interval.  The transferred product mixes with the older product in the next barrel.  No container is ever drained, so some of the earlier product always remains in each container.  In a Spanish sherry solera, the vintner may transfer about a third of each barrel a year.  A solera sherry has to be at least three years old when bottled.