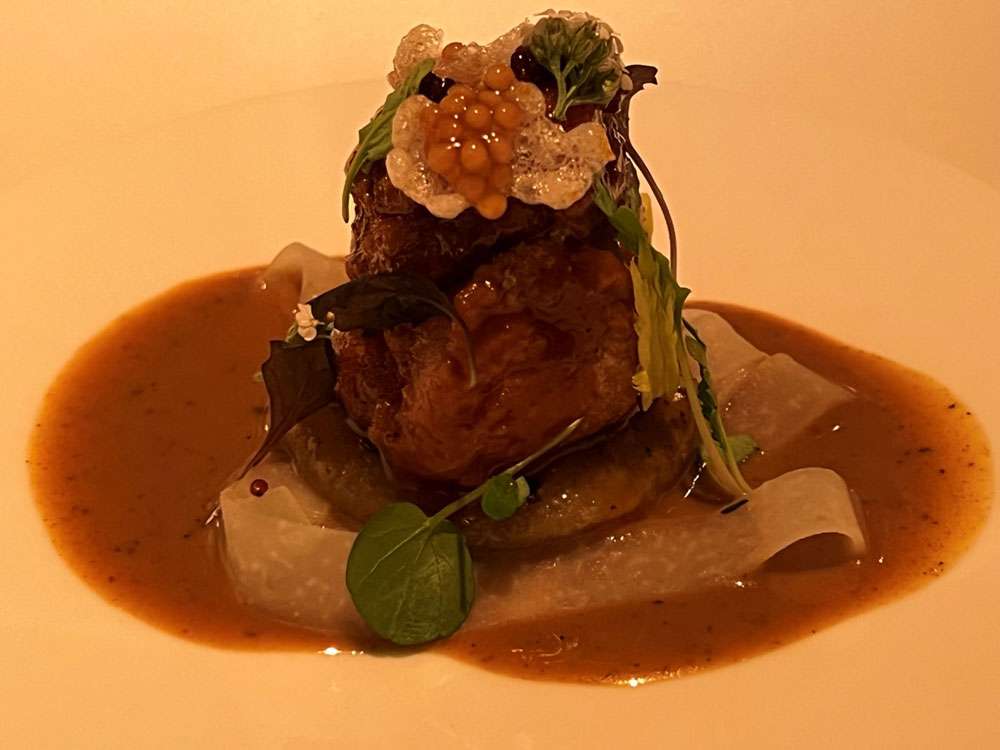 Since opening it has received numerous awards including 10/10 in the Good Food Guide, five AA rosettes, Best Restaurant at the GQ Food and Drink Awards, New Restaurant of the Year by The Craft Guild of Chefs, and the Service Award at the National Restaurant Awards.

We were served four very nice canapes.  These included a pea, mint and goat’s curd gougère; a ‘deconstructed’ jellied eel where smoked eel and dices of gel, sprayed with malt vinegar, were served on toasted seaweed in a thin tartlet; a sensational crispy, smoked, deboned chicken wing brochette, with honey glaze, lemon thyme and mushroom; and foie gras parfait and duck ham served under a thin madeira veil on a thin tartlet.  All of these were very good, especially the chicken wing.

The bread was a malted sourdough made from scratch in the kitchen with an 18 year old starter, flour from Wessex Mill and malt from Scotland.  It had a good crust with a moist, regular crumb and dense interior.  The cultured butter came from Ampersand dairy in Oxfordshire.

Our first course was Steamed Portland crab, that was served three ways – a bowl of crab salad, topped with brown crab sabayon and a spoonful of imperial oscietra caviar; a shot of crab consommé made from the roasted shell with lemon grass; and steamed crab claw covered by a crab jelly.  This was superb.

Next, was an asparagus tart with a five-year-old aged cheddar cheese royale, capers, cornichons, chopped egg whites and yolks, and wild garlic, served with an asparagus reduction, and a lemon hollandaise covering the asparagus spears.  This excellent asparagus is sourced from Spilmans, Church Farm, Sessay, and was cooked perfectly.

The fish course was Cornish turbot with grilled mussels, leeks, fennel and pepper dulse.  This dish showcased the turbot and mussels.  The sauce was made from the mussel cooking liquor, with shallots, white wine, and crème fraiche.  The fish and shellfish were cooked perfectly.

The crispy veal sweetbread had been brined, poached and crisped, then glazed with honey mustard, with mustard seeds.  The Norfolk kohlrabi was pan roasted and finished in the oven.  The dish was served with a rich kohlrabi sauce.  The sweetbreads were lovely and soft centred, with a sweet, crisp shell.

The “Beef and Oyster” main course was Highland Wagyu beef and Porthilly oysters. This course consisted of a poached oyster wrapped in a slice of raw wagyu sitting on a slice of perfectly marbled Wagyu.  It was served with an oyster emulsion.  There was an oyster shell side dish with layers of pomme puree on the bottom, mirepoix, then braised shin of beef, served in an oyster shell with a tapioca oyster cracker on top to imitate the oyster shell lid.  This was finished with a Guinness glaze.

The alternative to the “beef and oysters” was Herdwick lamb from the Lake District.  This was lamb breast confit that was topped with baby gem stuffed with vegetables, and lamb loin that had been cooked on the bone, served with lamb bacon on top, with sheep’s curd, savoury and black cardamom that gives a slightly smoky flavour, and a lamb sauce.  The lamb had good flavour and was served slightly pink, with an excellent sauce.

“The other carrot” was a pre-dessert with the flavours of a carrot cake.  The cake is made with pickled ginger, sweet cicely, pickled walnuts, fresh grated carrot, and presented in a gel shell in the shape of a carrot, sitting on a crumble.  This is served with a carrot sorbet on a blood orange and carrot reduction that brings freshness to the dish.  This is accompanied by a carrot cocktail with fresh carrot, a honey and cicely liqueur, topped with a sharp ginger mousse foam, taking the ingredients from the other carrot dish and serving them in a cocktail.  This was very clever, refreshing and a great pre-dessert.

To finish we had a very good warm chocolate and lavender tartlet which had an excellent pâte sucrée pastry, and a chocolate ganache that was infused with lavender.  We were also served the “Sauternes and Banyuls” wine gums, which were grape shaped gels of the dessert and fortified wines.  These were very enjoyable, soft and chewy wine gums that had the characteristic flavour profiles of the wines.

The food at Core is exceptional.  It’s expensive, but worth every penny in my opinion.  The service was outstanding, and the staff were very helpful and knowledgeable.  It’s very difficult to get a table because the restaurant is so popular, but if you are luck enough to get a booking you won’t be disappointed.

The menu for Core Seasons: The restaurant is located in Kensington Park Road: Clare Smyth grew up on a farm in County Antrim, Northern Ireland.  After serving an apprenticeship at Grayshott Hall, Surrey, she worked at Terence Conran’s restaurant at Michelin House, London.  Then, following a six-month period in Australia working for a catering company, Clare returned to the UK and staged at a variety of restaurants including The Waterside Inn and Gidleigh Park.

Clare worked at the restaurant of the St Enodoc Hotel in Rock, Cornwall, first as sous chef and then as head chef, and won the title of Young Cornish Fish Chef of the Year.

Clare left Ramsay’s to work at Alain Ducasse’s Le Louis XV restaurant in Monaco for eighteen months, before returning once more to the UK to run Restaurant Gordon Ramsay.

In 2013, Clare was named the Good Food Guide’s ‘National Chef of the Year’, and was appointed an MBE in the 2013 Birthday Honours for services to the hospitality industry.  Clare was awarded a perfect ten score by the Good Food Guide of the UK’s 2015.  She won the Chef Award at the 2016 The Catey Awards.

In May 2018, Jonny and Clare provided the private wedding reception for the Royal Wedding between HRH The Duke and Duchess of Sussex, Meghan and Harry.