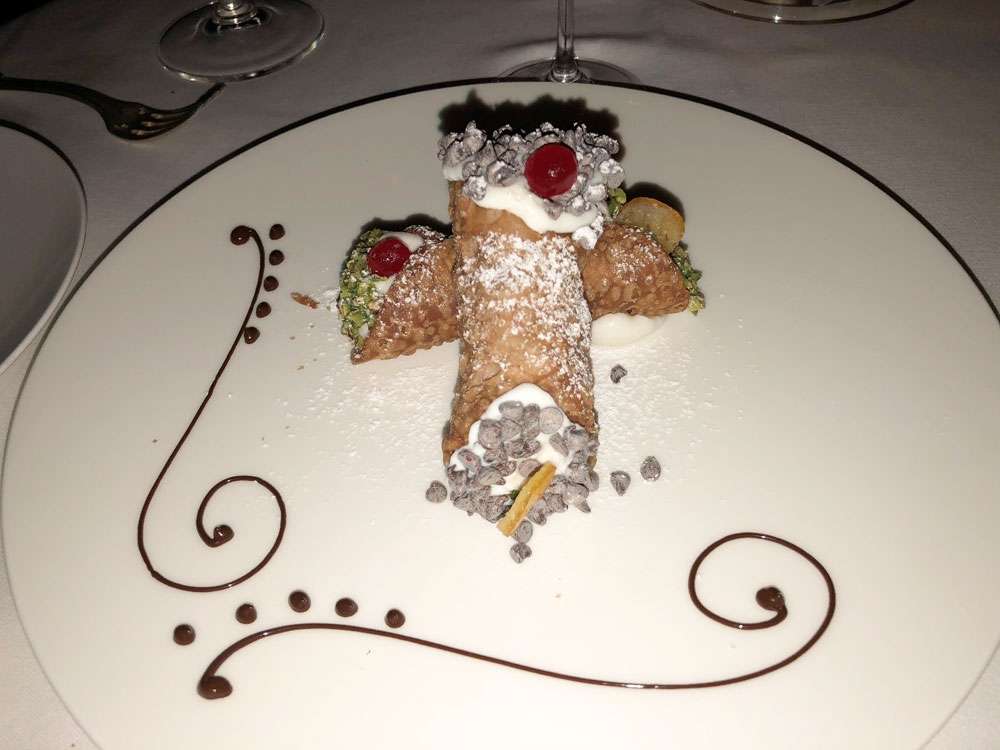 Executive Chef: Roberto Toro has worked as Executive Chef at the Grand Hotel since 2012.  Previously he a worked in restaurants in Denmark, Germany and France.  His reputation soared during the G7 held in Taormina in May 2016.  He was chosen as Ambassador of Italian Cuisine in the World during the second edition of the Week of Italian Cuisine in the USA, held in Washington in November 2017.  Also, in 2017 his book Piaciri, Chef Roberto Toro, on a journey through the colours, scents and flavours of Sicily, was published. Hotel: This magnificent hotel is situated in the centre of Taormina overlooking Naxos Bay, with dramatic views of the still smoking Mount Etna.  It is a minute’s walk from the Greco-Roman Teatro antico di Taormina, and 3 minutes’ walk from the 14th-century Palazzo Corvaia. Mount Etna is still active and is smoking: You can witness the dramatic sunsets over Mount Etna while sipping an Aperol on the hotel’s terrace: The views from the terrace at night are also very dramatic: Review: The Timeo Restaurant has a superb menu of the freshest, locally sourced produce that Chef Roberto Toro uses to produce his fabulous dishes.  The food, wine selection and service are all exceptional and complimented by the dramatic back drop of Mount Etna and Naxos Bay.

The hotel has an extensive wine list with a great selection of Sicilian and Italian wines, as well as wines from around the world.

We enjoyed a bottle of Cometa Planeta 2016 with the starters, a bottle of red Santa Cecilia Planeta with the main courses and a Calice Malvasia Lipari with the dessert.

The Cometa Planeta 2016 is 100% Fiano, a variety from Campania. It has intense and fruity aromas, maybe thyme, chamomile and hay.  It has a mineral palate which you expect it Sicily

The Santa Cecilia Planeta is 100% Nero D’Avola, from Noto at the southern extremity of Sicily.  With its white soils and ancient vines this is the epicentre of cultivation for Nero d’Avola. Santa Cecilia show cases the power of this grape and the unique aromas of Sicily.  It is a very spicy, fruity wine, with balsamic, blackberry and cherry on the palate.  It is the reference point for red wines produced from these indigenous Sicilian grapes: We visited some of the local wineries.  The Fischetti winery is situated at the foot of Mount Etna in Catania, and makes superb white, red and rose Sicilian wine.  The owner Ruggero Fischetti took us round, provided a lovely lunch with a wine tasting and then was extremely helpful arranging for the delivery of wines to my home address.  He showed where the last lava flows a few years ago came close to destroying his vines.

These wines cannot be purchased outside of Sicily, and are truly magnificent.  Shipping back to the UK is easy and not too expensive. (See http://fischettiwine.it/en/shop/)

All the wines we tasted were exceptional examples displaying the signature minerality that is the essence of Sicilian wine.  The Fischetti Muscamento Etna D.O.C. Red 2013 is made from vines that are over 100 years old