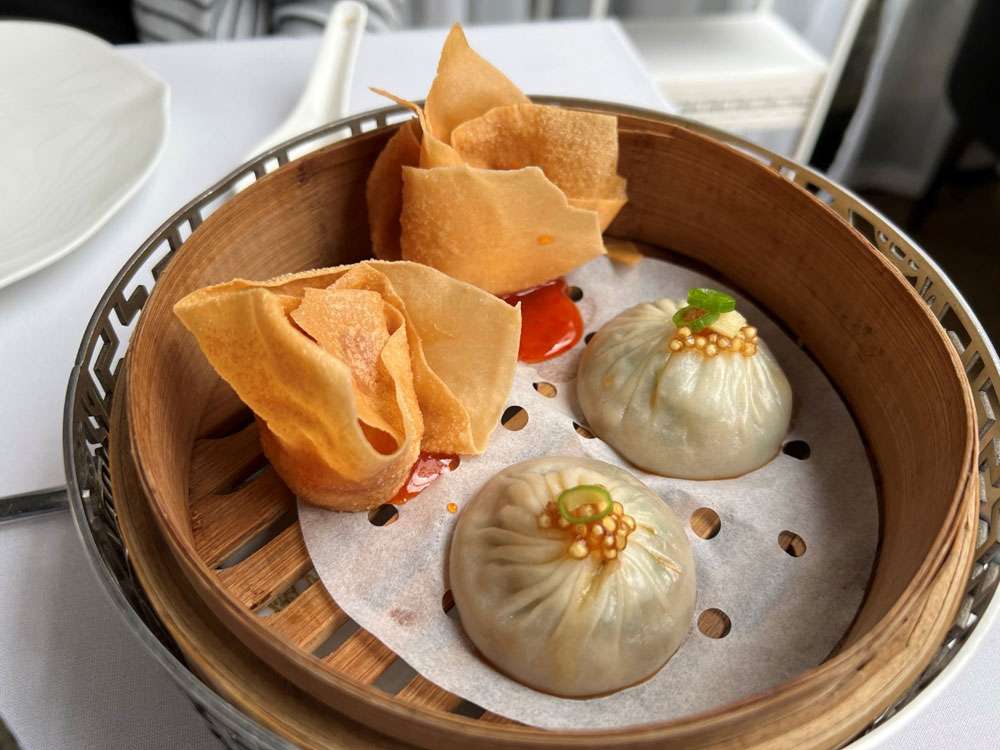 In 2012, Andrew Wong opened A. Wong, named after his parents, in Pimlico.  The site was previously the location of his parents’ Cantonese restaurant Kym.

The restaurant serves traditional Cantonese dishes with modern European twists.  The menu is seasonal and includes many favourites such as Peking duck, jiaozi (potstickers) and Shanghai pork dumpling with ginger-flavoured vinegar foam.  There is a “Taste of China” tasting menu, which can include soy chicken, ginger oil, and oscietra caviar in a wrap, Shaanxi shredded lamb burger with Xinjiang pomegranate salad, char siu with grated foie gras, Anhui fermented seabass, and Wuwei smoked duck.

The restaurant earned its first Michelin star in October 2017 and then its second star in January 2021, becoming the first Chinese restaurant outside Asia to hold two stars.

The restaurant is located a short distance from Victoria station.  You could easily walk past it.  When you enter you are warmly greeted and escorted to your table.  The staff are very friendly and knowledgeable, and clearly very proud of the restaurant.  There are two dining areas, one in the conservatory and the other inside, opposite the open kitchen where you can watch Andrew and his team preparing the food.  There is a bar with stools opposite the kitchen so you can have a seat close to the action.

We chose the Touch of the Heart Experience which is a selection of dim sum with paired wines.  Dim sum means “touch the heart” in Chinese.

Two dipping sauces were served, one using bean curd and the other dried shrimp.  Our first course was chilled “smacked” cucumber with trout roe, chilli and garlic vinegar.  This prepares your mouth for the upcoming dishes.  It was cool, refreshing, but with some spiciness.

The first dim sums were a crispy won ton with sweet chilli jam, and a Xiao long bao (Shanghainese steamed soup dumpling) that had thin wrappers just strong enough to hold the rich pork and broth with ginger infused vinegar inside.  Instead of serving the dumpling with red wine dipping vinegar, here the vinegar is injected inside the dumpling so you get the ideal amount.  We were also served a pork and prawn dumpling with pork crackling (siu mai), and a clear shrimp dumpling, with sweet chilli sauce, and rice vinegar foam (har gow).  These were all excellent and displayed the extraordinary skills of the chefs.  The Xiao long bao was especially good, filled with pork and soup, eaten with chop sticks and a spoon to catch the soup as you break through the thin outer layer.  Two glasses of well-matched white wines accompanied this first flight of dumplings.

Next, was the 999 layered scallop puff, which was a scallop wrapped in a very delicate cylinder of ‘999 layer’ puff pastry served with XO oil and pickled daikon; a very clever rabbit and carrot glutinous puff where the rice flour dumplings are shaped like a carrot and filled with a blend of rabbit and carrot, with pickled carrot on top to add some acidity; a bowl of spicy won ton with garlic, chilli oil and soy poached yolk – the runny yolk breaks when you cut into it and you can mix it into the spicy sauce to thicken it; Memories of Peking duck which were pre-prepared duck wraps – the duck had been marinated with Peking duck spices, and the wraps included cucumber, spring onion and caviar, served with oscietra caviar and truffle shaving on top, in a bamboo steamer which released cherry wood smoke when the lid was lifted; an Isle of Mull seared scallop with honey glazed Iberico pork cheung fun, layered between deep-fried spring roll pastry, served in the form of a crispy sandwich that you dipped in oil made from fermented chilli beans, chilli and wasabi; abalone served with aged balsamic vinegar where the marine snail is slow braised and served on top of a very good flaky pastry base; a dish named “The Cantonese kitchen” with barbecued pork crackling on top pf a prawn, with plum and truffle shavings on top.  Another white wine was served to accompany these courses.

Next, was the Xian lamb burger with sesame, coriander and chilli, fried onion and cumin, satay sauce, and Xinjiang pomegranate salad.  You assembled your own burger, with the mix of pulled lamb, salad and onion, between Bao buns.  The mixture of lamb and the satay with the salad was well balanced and very enjoyable.  This was accompanied by a glass of red wine.

The dessert was an exceptional steamed duck yolk custard bun that was soft, with a fluffy texture, and a liquid warm custard.  This was a superb dim sum with excellent custard that was not overly sweet.  It was served with a dessert wine.

Blood orange sorbet with chilli, salt and lemon was served on a wedge of orange, and a pistachio ice cream was served in a cone.

Finally, petit fours included a white chocolate Mahjong tile filled with a raspberry sorbet on a ginger biscuit, and blue cheese on walnut which you eat with a sip of plum vinegar.

The service throughout was very good.  The team is very knowledgeable and took time to explain the dishes to me.  This was a very enjoyable lunch displaying the great innovation and skills of Andrew Wong and his team.  The food is excellent.  I’m looking forward to returning for the Taste of China menu.

The Touch of the Heart Lunchtime Dim Sum menu: